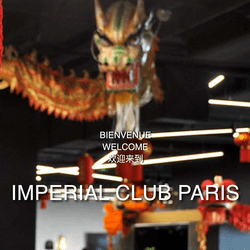 In Paris, French law prohibits the opening of a land-based casino. Fortunately, there are still clubs that allow people who like to play in circles or in exchange to enjoy themselves.

For some time now, it has even been possible to hit a progressive jackpot in Parisian rooms. This happens quite regularly.

For example, on Thursday, August 25, a player managed to leave the Imperial Club Paris with a nice win of over €70,000 thanks to a jackpot of this type.

A first in France at Club Pierre Charron last December

It all started at the end of last year. The Club Pierre Charron, located in the golden triangle of the 8th district of the French capital, has innovated to the delight of ultimate poker lovers. Indeed, on Thursday December 16th 2021, it added a progressive jackpot that can be pocketed on its 5 tables dedicated to this great classic.

This was the very first time in France that a jackpot increasing at the rate of the players’ bets was added on a traditional gaming table. This initiative was soon imitated elsewhere. Land-based casinos and other gambling clubs also started to follow suit, such as the Imperial Club Paris.

As the summer season comes to a close, one player was in the mood for a change of scenery. That’s probably why he went to the Imperial Club Paris on Thursday, August 25th. During his game session, he sat down on one of the tables dedicated to ultimate poker. A very specific game allowed him to win big.

In this one, he was dealt a jack and a king of diamonds that ideally completed the board to form a royal flush. Since he had placed the required €5 on the side bet beforehand, he managed to hit the progressive jackpot. We don’t know exactly how high it was.

Nevertheless, we can still say that our lucky winner pocketed a total of no less than €70,628. With such a sum, he will be able to treat himself and his family.

READ :   Focus on the state of the Gaming Club market in Paris

Only matching games at the Imperial Club Paris

The second gaming club to open its doors in the French capital, Imperial Club Paris is located in the heart of the 13th arrondissement’s Chinatown in the Galerie Masséna. Open 7 days a week between 2pm and 6am, it charges an entrance fee of 15€. There is no circle game in it.

For the moment, there are only tables dedicated to the following counterparty games: punto banco, stud poker, poker 21, ultimate poker and multicolor.

In its area of 888 square meters, we can also count on the presence of a restaurant-bar service to have a drink or a bite to eat.