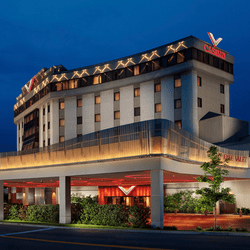 Let’s face it, losing a bet at a traditional casino table is never a fun experience. That’s not a good enough reason to do anything and everything.

This piece of wisdom is unfortunately not always followed by all players, as was recently seen at the Valley Forge Casino Resort in the US state of Pennsylvania.

Instead of respecting his loss, he chose to collect his chips before the dealer.

He then fled the gaming establishment. At this time, he is still being actively sought by the police.

A black man wearing a hat with an M

Unfortunately, there is very little information that has leaked out for the moment about the incident that interests us through today’s news. For example, we don’t know exactly which game is involved in this case, even if we can say that it is played on a traditional table.

Still, a black individual wearing a hat with an M logo seemed to be in the mood for entertainment on the evening of September 25. That’s probably why he went to the Valley Forge Casino Resort, located in the King of Prussia census tract about 20 miles northwest of Philadelphia.

At one point, at a table dedicated to a traditional game, he placed $1,200 on a single bet. After losing, he decided to collect his bet just before the dealer cashed out. Then he quickly left the scene. Now the Pennsylvania State Police are looking for him.

Earlier in the same month of September 2022, police arrested another 36 year old man for theft charges. He allegedly stole a Gucci wallet worth $200 plus the $400 it contained from a woman inside the Valley Forge Casino Resort. It was thanks to video surveillance cameras that our man was spotted, which allowed his arrest shortly after. This system must have also been used to try and identify the player who picked up his losing $1,200 bet. However, it is not yet known if this was successful or not.

In this area, it should be noted that Valley Forge Casino Resort has been equipped with state-of-the-art infrared cameras since November 2021. They make it much easier to spot children who are left unattended in cars in the parking lot of the gaming facility. Unfortunately, this type of incident is happening more and more frequently. This dangerous act to children’s health can result in a lifetime ban from casinos and a potential jail sentence.