Originally designed with the idea of ​​offering a modern alternative to the Tony Hawk games, then absent from the radar, SkateBIRD intends to bring up to date the formula that made the heyday of the genre with its little personal touch: replace humans with birds. An idea as absurd as it is brilliant, which we tried in a new demo. 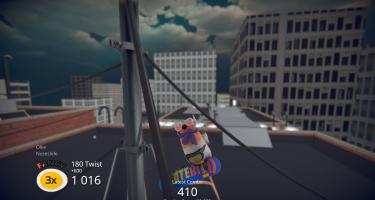 Direction the roofs, second level of the game, very different from the first which took place in a house where an improvised park had been installed with everyday objects (straws, cardboard boxes etc.). So eye-catching cute and scaling side is swapped for something more realistic. A less pleasant aesthetic, far from the colorful environments promoted by the game. The level-design nevertheless remains nice, but it lacks this “je ne sais quoi” that was the charm of the first demo.

The disconcerting swept aside, it is time to take action. Sadly, the developers did not take the time to put a tutorial in the game, nor an option to consult the list of tricks. Luckily, those who played Tony Hawk’s Pro Skater of yesteryear or any similar game will not be at a loss since the layout of the keys is quite similar. For others, it will be done the old-fashioned way: by pressing any button at random, it works just as well. 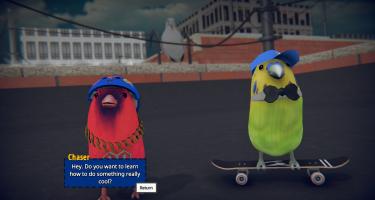 The movements may seem heavy at first, but SkateBIRD is generally fluid and one connects the ollies, the grinds and others pleasantly. A good old school skateboarding game with a feeling as we like them, but which lacks a small dose of punch and precision. Even so, having small wings to stay in the air longer and catch up with a failed trick, it really goes crazy.

Absurd, but so much fun

A few NPCs are placed here and there on the map to give objectives, also classic and similar to the games of yesteryear. One of them teaches avian skaters to move from one roof to another using fans located at the ends of the buildings. What if they screw up? A huge pigeon comes to save the day. Absurd, but so much fun. SkateBIRD plays on the second degree and does not intend to take the lead. 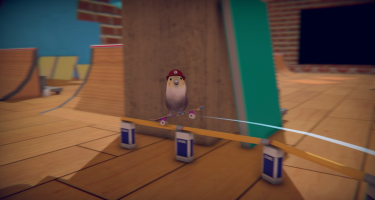 Apart from a handful of new playable birds, and this unprecedented level, the Steam Game Festival 2021 demo showed us nothing more than what we already knew: Glass Bottom Games does not hide its inspirations from Tony Hawk’s Pro Skateboard, but wishes to have its own identity. It’s pretty well underway.

READ :   Codemasters Cheschire (Motorstorm) would help on the next Need for Speed