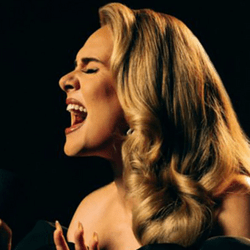 For several weeks now, rumors have been growing that Adele and the American group Caesars Entertainment have not given up on the residence of the famous British singer in Las Vegas.

These rumors have just been confirmed. Indeed, only a few days ago, it was learned that the famous concert series Weekends with Adele would start from next November.

A residence that goes from 24 to 32 concerts

It was in December 2021 that we learned that Adele would hold a residency in the Colosseum venue at Caesars Palace in Las Vegas between January and April 2022. But here’s the thing: the day before the start of the 24-concert series, the singer published a touching video message in which she announced that her residency was not ready after all.

At the time, she mentioned delays in the preparation of the shows due to the contamination with Covid-19 of part of his team. Today, we know that the international health crisis is not the only one responsible. There were also artistic differences between the British star and the producers of this series of shows.

READ :   one of the fathers of the Hippodrome Casino

Since then, there has been a lot of speculation about the cancellation. Some rumors included moving the residency to the Zappos Theater at Planet Hollywood in Las Vegas.

But, it will be well and truly at the Colosseum of Caesars Palace that will be held the Weekends with Adele residency from November 18. Finally, there will be 8 additional concerts for a total of 32 performances that will take place on Fridays and Saturdays until March, with breaks planned for Thanksgiving, Christmas and New Year.

Tickets for the initial residency were snapped up very quickly before the public sale began. Buyers were given the option of getting a full refund or waiting for new dates, which has now been done. Unfortunately, if the new date is not convenient, there is no exchange possible.

On the other hand, it is still possible to get a refund and participate in the pre-sale reserved only for first-time buyers, which will take place on Wednesday, August 10, 2022.

READ :   A party at Caesars Palace for the return of F1 to Las Vegas

Of course, the full refund only concerns the price of the ticket. Many of the singer’s fans were planning to travel to Las Vegas on purpose to attend the show. They were obviously not reimbursed for their plane tickets, nor for their hotel rooms among other things.

Some details about Adele’s old contract

We don’t know the content of Adele’s new contract. Nevertheless, we know that she was to receive $700,000 per show and a share of the ticket sales. In addition, she was to be housed in a luxurious penthouse at Caesars Palace.

She and her entourage were also entitled to eat for free in all the restaurants of all the hotel-casinos managed by the Caesars Entertainement group.