It had been a while since we had seen the Age of Empires license, yet it had become a cult favorite. The franchise has loosely resurrected with great blows of “Definitive HD Remastered Edition ++”, but we did not have any new opus to put in our mouths, until this year. It is Relic Entertainment (Warhammer 40K: Dawn of War, Company of Heroes…), under the tutelage of Microsoft, which has therefore taken over the reins of the saga and offered us a 4th episode so much awaited. Is the STR king still in shape? 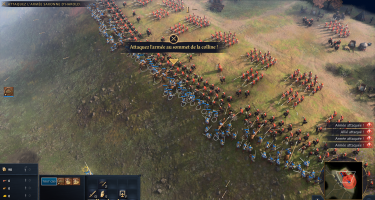 For the context, I have absolutely no solid experience on an Age of Empires, apart from a succession of local games with my friends on AOE2 at the time. Since then, I have not changed the saga and it is a little backwards that I approached this Age of Empires 4, the STRs are not very famous for being super friendly with new players.

And it is there the first strength of this episode: its accessibility. The game has an ultra complete and very didactic tutorial which teaches us in a few sleight of hand, everything there is to know about the basics of gameplay. First of all: the fundamentals such as the management of resources (gold, food, stone, wood, etc.), the usefulness of the villagers who serve here as serfs who are good at doing everything, the management of our maximum population to be enlarged with houses in particular and finally the construction of buildings and their usefulness. Then follows a pan on the keyboard shortcuts and movements, important data if you want to put the nose in the multiplayer mode where the speeds of action weigh in the balance. We therefore easily learn to create groups on the fly and to use and abuse the “Move-Attack”, which allows our units to advance from point A to point B by attacking on sight (ideal for keeping a distance between your units and enemies, or harass your opponents for example). Obviously, I’m not going to list all the points that the tutorial covers, but you have the picture. Age of Empires 4 is therefore a perfect opus to learn about the license, and even, more generally, to the STRs of the genre. 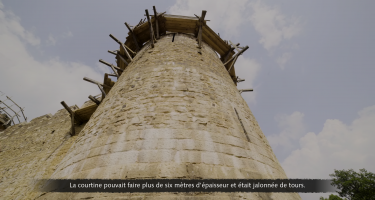 You can also refine your mechanics during campaign mode, which traces part of the history of 4 of the 8 playable nations: The French, the Mongols, the Rus’ and the English. Nice scenarios that allow us in particular to meet historical characters – like William the Conqueror or Joan of Arc – the time of a handful of missions with too banal objectives and above all, a bit repetitive. Very often, we find ourselves managing only a few units on a trail, or on the contrary a complete armada to fry directly without the management aspect that there is normally behind. Fortunately, we will also be entitled to more relaxed sequences forcing us to play with our buildings and thus get our hands dirty to attack the big piece, namely the multi.

READ :   Sol Cresta: the date of its release will be revealed on January 22

Furthermore, the 4 campaigns are also the opportunity to unlock a whole bunch of archives and documentary videos. But where usually this kind of content mainly serves as “little extras”, here the videos come from a real work of documentation and are fascinating to watch. Some can even last a good 30 minutes. We follow a whole bunch of subjects linked to the Middle Ages, from conservative associations, to commemorative events, through documentaries revolving around personalities or strong events that marked history, or even making-of. on the construction of period buildings. This is a real generous added value that is offered to us, but which will also weigh heavily on your hard drive. We are talking here about a game that exceeds a hundred giga all the same.

As at the time 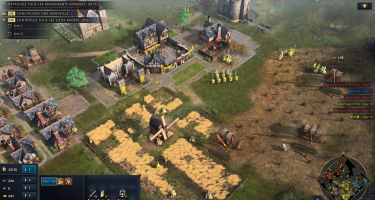 Already at the time, Age of Empires was cut out for versus and in 2021 it is all the more so. We therefore find the possibility of launching matches in 1v1, 2v2, 3v3 or 4v4 in a slew of tailor-made cards according to the chosen mode. In multiplayer, 4 nations are added to those available in campaign: the Sultanate of Delhi, the Holy Roman Empire, the Abbasid Dynasty and the Chinese, for a total of 8 playable peoples. Connoisseurs of the license will say that it is a little thin, it had also made people react on the Web to the announcement and we can not prove them wrong, but to be forgiven Microsoft counter-attacked by hammering that ‘they were all very different. So yes, but no actually.

Indeed, each nation has its own unique mechanics and units. The Chinese, for example, will have the opportunity to build buildings a bit faster and especially to call on a special unit, a tax collector who will go around your buildings to collect gold or improve them if you order him to supervise them. Besides that, the French have faster technological research, the Sultanate of Delhi can do them without cost, etc … However, the substance of the gameplay itself doesn’t change one iota..

You will systematically start by recovering as many resources as possible, exchanging them to pass the ages by building a monument in order to have access to new technologies, and rusher one of the three victory conditions. To win, you will have to either destroy your opponents, take control of a number of neutral places of worship by sending a religious emissary there or by building a wonder. Finally, the specificities of the Nations have too little influence on the progress of the games and above all, the way in which they are approached.. However, there are things to do, the software offers a nice range of buildings, military or not, and the placement of these will also be important, as will the management of your technologies – directly unlockable via the buildings themselves – same – which will need to be carefully considered according to your needs. The same is true for combat, which, thanks to a large number of different units (riders, melee, ranged or siege engines, etc.) whose strengths and weaknesses can be viewed directly on their file. , thus making it possible to react quickly.

However, we very quickly find ourselves doing the same things mechanically, over and over again. As long as neither opponent decides to harass the other or shed first blood, the game tempo will be the same no matter which civilization you play. Only the Mongols are doing their best since, as good nomads, they have the right to move their buildings as they wish, which offers wide strategic opportunities and makes them difficult to identify adversaries. This will be especially true in modes beyond traditional 1v1 since card size will matter a lot. 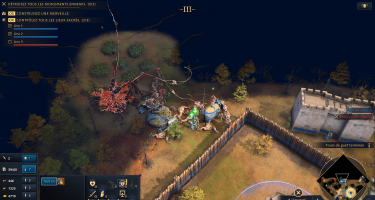 In 1v1, and even in 2v2, the maps are really narrow. The old people may come and stone me in the public square, but that very old school aspect to me doesn’t work. In less time than it takes to say it we find ourselves with the enemy where he has already built a wall dividing the map in two. It’s neither fun, nor credible and new players will quickly drop the case, especially as multiplayer is also plagued by rushers, who throw you a horde of inexpensive militias to have you in. wear. In other words, I couldn’t recommend enough for new players to take a look at the other modes to get started and take the temperature.. It’s much more fun when you look at 3v3 and 4v4 which offer more open maps, offer a galvanizing teamplay variable and daunting clashes. The tempo is automatically more calm and it’s much more pleasant. The maps besides are rather well built and offer several tactical options, in particular with many places playing heights, natural bottlenecks or even wooded areas allowing many ambushes. We will only rail against areas of scattered forest where pathfinding becomes particularly capricious and will sometimes block our units in the background.

Technically, finally, the software is clearly not a graphic standard but still knows how to watch us, in particular with the modeling of its buildings, and above all, their architecture which obviously changes from one civilization to another. Indeed, although it is full of colors, they lack pep and even gives the impression of being a little dull at times. The environments are generally quite successful and are above all very natural. An observation that we can also make for our constructions which, of themselves, reveal bits of decor that combine organically. Building a house, for example, will reveal a few plots of land on its sides and dress them with a plow, piles of logs or even drying racks with linens. The streets are linked to each other automatically and evolve over the passing ages. There is almost a bucolic aspect to growing our villages little by little, and we will feel a pang in our hearts when they are split open by the enemy army.. War is war.