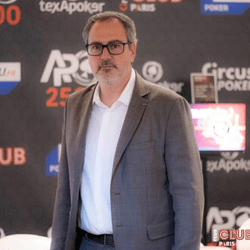 There is something new at the head of Club Circus Paris located in the 16th district of the French capital. Indeed, on Monday, November 21, this gaming hall announced on social networks that Jacques Ré was no longer its director.

Alexis Laipsker has just been appointed in his place.

Well known to the general public, he has been the host of various television shows devoted to poker. He has also had a lot of success as a writer of detective stories.

The second most influential personality in poker according to Eurosport

Born on October 14, 1969 in Paris, Alexis Laipsker is a communication specialist. From 2007, he dedicates himself fully to poker by becoming a player then a journalist and commentator. During 12 seasons on M6 and NRJ12, he was notably heard on the European Poker Tour.

Then, he presented various programs including the reality show La Maison du Bluff on NRJ12. In 10 years, he has worked on 10 channels and participated in more than 1,500 shows. He was also the communications director and spokesperson for the PokerStars platform before turning to land-based establishments. He notably worked as General Manager at the Club Montmartre in Paris between 2018 and 2020.

That’s why the Eurosport website presents him as the second most influential personality in poker behind Patrick Bruel.

Alexis Laipsker seems to be very happy with this appointment which allows him to join a dynamic and inventive team. Indeed, he has always considered that Club Circus Paris was the ideal place for poker and gambling lovers in general. It is not for nothing that partnerships have been signed with Texapoker, PMU, Unibet and PokerStars among others.

And then, despite the new regulatory constraints that now weigh on the tournaments, these competitions have not been stopped. In fact, they have been expanded even further. Now that he is at the head of this prestigious room, Alexis Laipsker wants to help make Paris the European capital of poker.

READ :   Two players and a dealer cheat at blackjack

The impressive selection of tables at Club Circus Paris

It was at the beginning of September 2019 that the Liège-based group Ardent launched Club Circus Paris in the 16th arrondissement not far from the Porte de Saint-Cloud and Porte d’Auteuil. Open every day between 12:30 and 4am, it charges a daily entrance fee of 11€.