Against the purchase of a PC equipped with an RX 6 series graphics card, AMD offers up to three games including the new Sniper Elite 5.

A good plan, for a little that you have a few hundred euros to put in a graphics card. The constructor AMD has indeed launched an operation called “Raise the Game Fully Loaded”a bundled offer for players who will fall for a AMD Radeon RX 6000 Series GPUs (including the 6950, 6800, 6700, 6600 and 6400). 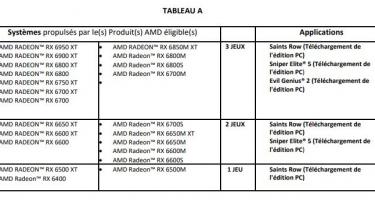 From participating partners and from June 21, players who take an eligible PC or laptop equipped with these cards will obtain the bundle and will be able to choose up to three titles as a gift: Sniper Elite 5, Saints Row and Evil Genius 2.

Unfortunately, no French merchant participates but you can try to go through a foreign online store. We therefore hope that the offer will come to us later. For the others, it will end on August 13.

READ :   STALKER 2: GSC talks about the war in Ukraine. Moving and terrifying.