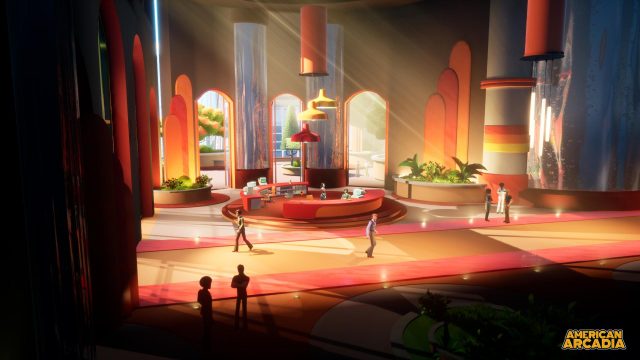 Out of the Blue (Call of The Sea) presents its new game, American Arcadia, a deadly reality show set in the heart of the 70s.

After a puzzle game in the 1930s, Out of the Blue, still supported by Raw Fury, plunges into a retro-futuristic universe with American Arcadia.

When popularity can save your life

Sold as some kind of morbid The Truman Show, American Arcadia puts players in the shoes of two characters living in the city of Arcadia. But what they don’t know is that this retro-futuristic metropolis actually serves as a gigantic backdrop to a TV show where the fate of contestants rests in the hands of the public. An atypical pitch which is reminiscent of the Black Mirror series.

The developers tell us a software composed of 2.5D platform phases, as well as several puzzle sequences in subjective view. All in a rather colorful universe inspired by the 70sand dubbed by renowned voices for the VO.

For the moment, the software is only planned on computer through Steambut the studio already tells us thatAmerican Arcadia will be present at of the Summer Games Fest set for next June and that many details will be revealed there.

READ :   what if the Covid was not the only reason? News @VGR