First title of the license to benefit from a second year of contentAssassin’s Creed Valhalla started this one on March 10, 2022 on PC, PS4, PS5, Xbox One, Xbox Series and Stadia with a third major expansion titled Dawn of Ragnarok (Dawn of Ragnarök) which follows The Wrath of the Druids and The Siege of Paris. Ubisoft also announces that new free seasonal content will continue to be offered to all players.

Developped by Ubisoft SofiaDawn of Ragnarök asks Eivor to face his fate taking on the features of Odinthe Norse god of war and wisdom. Svartalfheim, the world of the dwarvesfalls into ruin and Surtr, an immortal fire gianttook advantage of this chaos to capture Baldr, the son of Odin whom you must rescue.

READ :   The Last of Us 2: multiplayer content discovered in the game

One new gameplay system allows to’absorb the powers of your enemies and get new styles of play based on divine forces, whether for combat, stealth, exploration or puzzle solving. For example, you can transform into a crow, imbue your weapon with ice, or even resurrect fallen opponents to fight alongside you.

New enemies, including the fire giants of Muspelheim, the Muspelsoffer new challenges, just like the Valkyries and their battle arena. You can also enjoy novelties in terms of equipment and armamentincluding a unique weapon type for performing special combos, a new level of divine quality for all gear, and more customization options for Eivor Colony tattoos, hair, and decorations.

The title was conceived as a endgame contentthus requiring a 340 power levelbut if this is not your case, you will be able to improve your stats and equipment to reach this one by launching the extension. 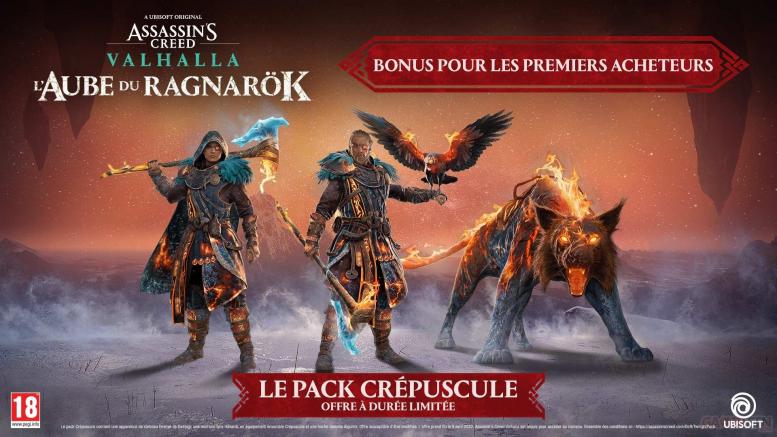 Finally, all players who purchase Dawn of Ragnarök before April 9, 2022 will receive the Twilight Bundlewith immediate availability in the base game, which includes the dellingr sent raven skinthe Lynx Havardr mount skinthe Twilight Gear Pack and the danish ax Algurnir.

READ :   Moss: Book II prepares its next release with gameplay