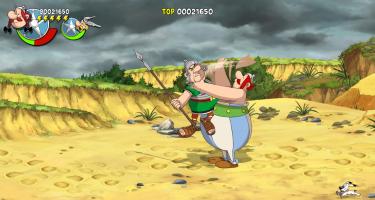 With Asterix: slap them all, Microids is embarking on a new adaptation of this license, a real monument of the comic strip created by René Goscinny and Albert Uderzo. It must be said that there is plenty to do, the universe is so rich and the adventures numerous. Asterix and Obelix are never the last when it comes to beating a few Romans, and this episode, which takes the form of a Beat Them Up, will make sure to take advantage of this to deliver a good old-fashioned outlet worthy of our two Gauls.

A recipe that starts well

The first point that jumps out is the entirely handmade visual aspect of the software which borrows a 2D view in horizontal scrolling. We recognize here very well the universe of comics and the environments that we will have to travel – the Roman camps, the Armorican forest, the arenas, the pirate ship -, all of this. sublimated by pretty, shimmering colors. The characters are not left out, whether it is the heroes or simply the enemies who will act as cannon fodder throughout our adventure, all benefit from the same attention to detail.

Attention to detail that contrasts with the overly jerky animations, which clearly lack binding during transitions. The rendering is surprising, even frustrating, since we could legitimately expect to have a much more refined result. Even if it fits perfectly with the style of Beat Theam Up, it could have been interesting to build more on what we have observed in animated films. 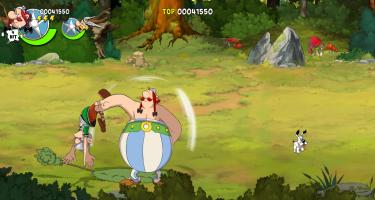 On the game design side, as we mentioned above, you progress in levels made in the old fashioned way, namely that your progress is completely linear, except for the rare side roads that allow you to find one or two barrels filled with gold coins or food. For the rest it could not be more classic: progress, hit Romans, progress … Finally you have understood the principle, even if fortunately some “mini-games” come to break “a little” the monotony. 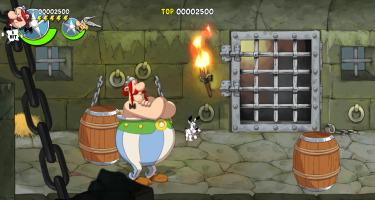 On the other hand, don’t rely on in-game storytelling to relive the adventure. This is very succinct and even dispenses with kinematics. The app is also completely devoid of staging, the context will be told to you in the form of silent images in comic format which will take up the important moments of the story … You will recognize that we can do better in terms of immersion.

READ :   Fallen into oblivion, the Battle Royale Hyper Scape is stopped by Ubisoft 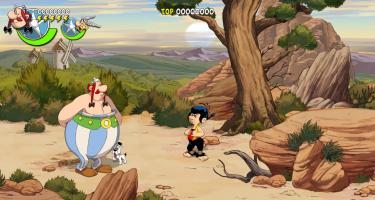 No need to procrastinate, it’s time to talk about what is “really” upsetting. When we talk about Beat Them Up, we expect a series of combos, technique, a little interaction with the setting, the challenge against the bosses. On this side, Asterix and Obelix: slap them all is very frustrating.

Indeed, the app benefits from a panel of actions which gives hope for a little technicality. Powerful hits, weak hits, dash, jump, stun, grab almost everything. Except that we have the impression that everything has been put in a shoehorn without giving us the necessary variety of enemies to take advantage of it. The clashes are divided into 3 categories: melee, ranged attacks and bosses which are presented a bit like a mix of 2. Moreover, we do not hesitate to serve them regularly – The centurions, the pirate chief, the Auroch to quote them only – and of course without modifying them. patterns. 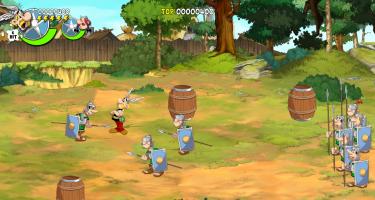 It’s very simple, we could almost do the adventure from start to finish by constantly performing the same actions, while ensuring of course to recharge its energy bar to distill some overpowering blows. The main difficulty is managing those who throw javelins at you. And to remedy this little problem, you will quickly adopt this strategy to complete the levels, namely: dasher to make a nice little pile of enemies, then chain attacks to hit them in batches of 10 … Yes, that’s about it.

We can surely put the blame on the play areas which are too small, and the camera which is too zoomed in on the characters. This has the effect of crowding the enemies which are sometimes too numerous compared to the size of the arena. Your blows therefore quickly tend to hit or knock everyone down … So, if it’s nice on the first two acts to see all this merry mess by distributing slaps to the Romans, we quickly start to think that it could be long until the sixth, especially since environments sometimes tend to recycle clearly lack possibilities for interaction. 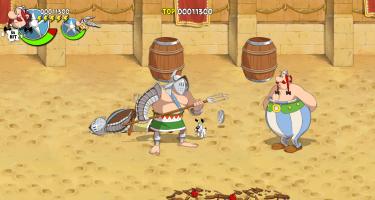 Do not count on any replayability unless you are a fan of scoring. If the game allows you to switch between Asterix and Obelix, you will quickly realize that few elements differentiate them, even if it must be recognized that the liveliness of the former facilitates the adventure.

Note that the software is also playable locally for 2. To have tested it, there is not much to add compared to what was said above since there is no interaction between our two characters. However, contrary to what one might think, this tends to increase the difficulty of the game, since instead of having a warm character who stays safe from the blows, the 2 are outside. It will therefore be necessary to be very careful because the rations are rare and if one of you falls to the ground, it is the game over. 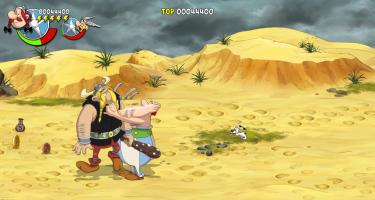 Fortunately, the sound design brings a bit of gaiety to it all. The music is not to be outdone and very precisely accompanies the paintings that we travel through during this adventure, with the official voices we’re used to hearing in cartoons, including the narrator of our adventure. Our two heroes do not hesitate to comment on their discoveries or the combos during the fights.