Creator of Sonic the Hedgehog, it is certainly the strong argument on the CV of Yuji Naka who had returned to the shadows for a bunch of years. And since 2021 promises to be as bizarre as 2020, his return to business will not surprise many people. At this stage, anything is possible.

In order not to fall back into anonymity, Naka-san with his studio Balan Company found solace at Square Enix to publish his first game since 2015: Balan Wonderworld. Is it so wonderful? It’s far from madness for these preliminaries. 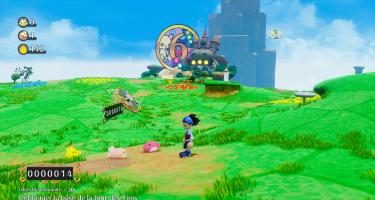 Three chapters, four acts, a boss and bonus levelsit’s demo content which is available to all. Overall, you should take about thirty minutes to go around the owner and that’s already a lot. At first you can take possession of a child – Leo Craig or Emma Cole – which, at least for now, has no bearing on gameplay. You immediately landed on Tims Islandthe name of small colorful creatures similar to dragon quest slimes who will escort you wherever you go. At this time, there is already something wrong with a game that wants to be widely accessible: the absence of clear instructions on these critters. So that they can help you, the idea is to take good care of them by feeding them with drops of color – to extract from the levels -, each time you return to the island in question which is your central HUB. Just place yourself on flowers (pink, yellow, blue, red), then press the single action button to release this commodity. That’s explained. On the other hand, it is necessary to know that colors relate to skills. Red for strong Tims in attack, yellow for them to detect objects better etc. And this point, we learned it above all in the guide that we had… Incidentally, eggs hidden or brought by your Tims will be used to hatch new ones.

READ :   The Batman delivers its musical theme, its duration and an anecdote

Then the serious things can begin: the entry into Act 1 of the initial chapter which, with its predominance of green, resembles Sonic’s magical Green Hill, but without its qualities. From the outset, the slow rhythm, too slow, is shocking. No need for an ersatz hedgehog, but compared to other 3D adventure/platform games, we feel this soft pace, especially since there is no key to run, with a hero who weighs “38 tons”. In terms of mechanics, the biggest is based on a button for the same action – you can press L1, L2, R1, R2, Cross, Square, Triangle or Circle, it’s the same – and on a concept of costumes to put on. To be more swaggy, but more particularly to progress and reach forbidden corners if you don’t have the right outfit.

From the outset, the rhythm slow, too slow

We have for example the Lourbillon: contraction of wolf and whirlwind, you have understood what can be done; the Bongouru: to lengthen your jumps and reach more distant places; or even the Larbombe: a pig that has a ground breaker ability to flatten switches. If you die, you lose a garment-object and you will have to unlock it again by finding keys. It’s nice… but it’s hard to get overly excited about this trial version. The exchange animation of your outfit could turn out to be cumbersome in the long term – to be seen – in the same way as the overly childish character design and the jump functionality – otherwise approximate – which is assigned to a disguise. A highly questionable choice for the fluidity of the experience. 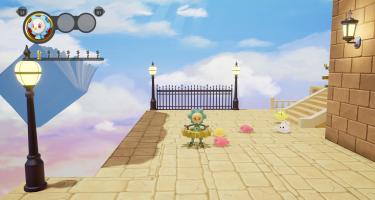 Obviously, your mission if you accept it is to plunder each place with the main goal of harvest Balan statues – the happy clown of the game – who, they, open doors to other worlds (12). The golden hats, which belong to our mountebank, lead to bonus portals where a small QTE exercise is offered: align the silhouette of our player with its ghost equivalent. The use of costumes is therefore a solution, as is going back and forth through teleporting mirrors. But here again, exploration struggles to prove to us its effectiveness and interest. The levels are visibly small, less original than one might expect at first glance and their layout, that is to say the level design, without inspiration. The difficulty, already absent, except when we have to overcome the capricious camera – who is both free and follows you at the risk of crashing into the background – does not miraculously reappear during the encounter with the boss.

Despite the childish side, the magical theatrical aspect could convince with its music whose tempo reverberates in the form of invisible bubbles on the screen, but the narration seems sporadic. To see if the played child finds the word according to the adventure.