Battlefield 2042 has had it tough since its chaotic release. Mass bugs, design problem, balancing in cabbage… The players got angry, and DICE finally reacted by announcing a redesign.

Almost 6 months from its release, Battlefield 2042 no longer knows which way to go. Despite the large number of updates, and the postponement of season 1, players are not satisfied and continue their outcry. So much so that DICE finally found the most effective solution to make everyone happy: redesign. Except they don’t quite know how to go about it either.

After analyzing the feedback from its community, DICE concluded that it had to completely revise its maps. Players are complaining about maps that are much too large, snipers too advantaged by the lack of relief, as well as too low and scattered combat intensity in Conquest, while it’s much too messy in Breakthrough mode.

It is therefore by relying on its problems that DICE is reviewing the construction of its cardsthe placement of objectives and even the number of players.

The studio therefore announces that it is thinking about planing the number of soldiers on Breakthrough mode to make it less stuffy and more readable. Furthermore, all the maps will be put on the operating table to be reworked. At first, the objectives will be moved to naturally draw new paths while shortening the time it takes to get from one point to the next. Respawn points will also (maybe) be redesigned and DICE is also considering redesigning more secure paths to cover more easily lines of fire and snipers. 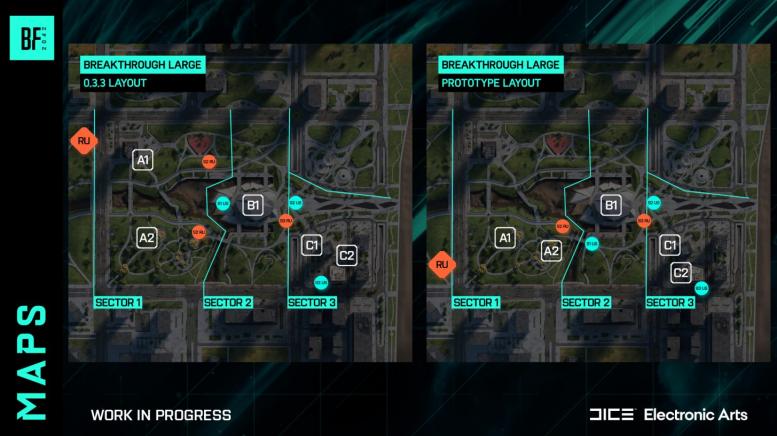 In addition, DICE invites all those wishing to provide a solution or any other suggestions, to contribute their stone to the building by posting their ideas in the dedicated forum.

Admission of weakness or desperate attempt to patch things up with your community? We let you make up your own mind. In all cases, Battlefield 2042 is going ahead with big changeshoping it saves him this time.