Like other studios, particularly in Poland, Bloober Team (The Medium, Observer) has announced the withdrawal of its games from the Russian market, but also in Belarus.

In protest with the Russian invasion on Ukrainian soilsupported by its Belarusian ally, the Polish studio Bloober Team has announced that it will withdraw all its titles from online stores in Russia and Belarus, “starting with Steam”, specifies the press release.

This action is not intended as a response against the populations of these regions, but a declaration against the war.

In addition, the studio, which has therefore joined the numerous protest movements of video game players for two weeks, and in particular on the side of Polish developers (neighboring country and friend of Ukraine), published a statement of support. 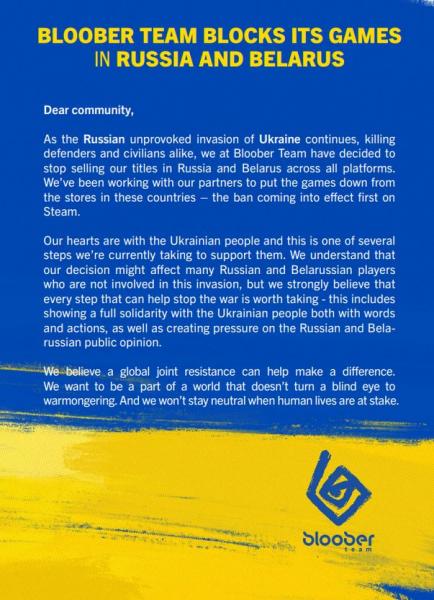 The studio also recalls that he donated money to Ukrainian refugeesas well as job offers and relocation assistance.

READ :   Xbox Game Pass Christmas titles are on the run

The full list of games now blocked in the two targeted countries: