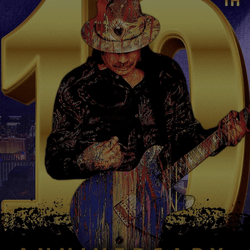 At present, there are more and more celebrities living in Las Vegas in Nevada. Among them are the actors Nicolas Cage and Mark Wahlberg or the guitarist Carlos Santana.

The latter will soon be taking up residence at the Mandalay Bay Resort and Casino.

This series of concerts marks his big return to a stage on the Strip after he collapsed in the middle of a show in the state of Michigan on July 5.

Fainting from exhaustion and dehydration

At the beginning of the summer Carlos Santana was at the Pine Knob Music Theatre located in the town of Clarkston, about 60 km northwest of Detroit in Michigan, for a concert. It is necessary to admit that this last one did not finish very well.

After about an hour of show, the 74-year-old guitarist collapsed on the stage. Then, a man asked the crowd to pray for him because of a serious medical problem.

In the end, Carlos Santana came out of it okay. In fact, he only suffered from heat exhaustion and dehydration. Well taken care of by the emergency room, he was able to leave a little later in the night. For safety’s sake, he still rescheduled some of the concerts on his North American tour with the band Earth, Wind and Fire.

He did not return to the stage until August 24 at Lakewood’s Cellairis Amphitheatre in Atlanta, Georgia.

During the month of December 2021, Carlos Santana suffered from a much more serious health problem that caused him to undergo emergency heart surgery in order to eliminate an arterial obstruction. As a result, part of his residency at the Mandalay Bay had to be cancelled. It was not until the end of January 2022 that he was back for a few concerts in this famous hotel-casino located on the Strip.

READ :   Monopoly Big Baller in the spotlight on Dublinbet

Finally, Carlos Santana is about to hold the concerts that were cancelled. He will be on stage on September 16, 17, 18, 21, 24 and 25 at the Mandalay Bay Resort and Casino. Some tickets are still available for sale, at the time of writing.

The meeting of 2 prestigious names

With this residence of Carlos Santana at the Mandalay Bay Resort and Casino, 2 prestigious names meet again.

Born on July 20, 1947 in Mexico, Carlos Santana is still one of the most famous guitarists in the world today. He began his career at the very end of the 1960s. We owe him some cult pieces like Europa among others.

Opened on March 2, 1999, the Mandalay Bay Resort and Casino is one of the most emblematic establishments on the Strip. It includes 3,309 rooms or suites and a gaming room covering an area of 12,500 square meters.