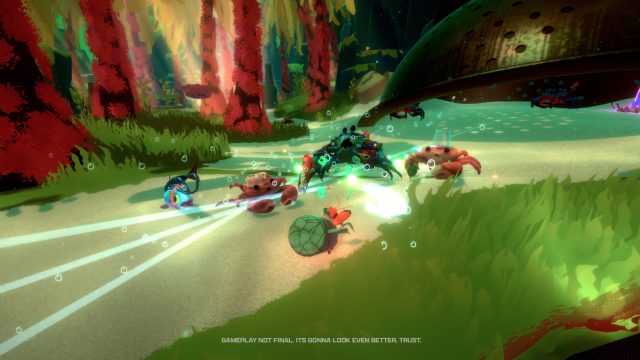 Not content with having offered their quirky vision of roguelite, the Aggro Crab studio is now rushing into the Elden Ring field.

A small independent studio behind the very good Going Under, a colorful and quirky roguelite set in the world of start-ups, Aggro Crab this time puts a hermit crab in the spotlight in a completely unexpected genre.

Even underwater you can sweat

With Another Crab’s Treasure, the studio enters the field of FromSoftware and offers his vision of the souls-like genre. Here, no dragons, no breathtaking heroic fantasy panoramas, but rather colorful, polluted seabed, where crustaceans slap each other.

The least we can say is that the proposal knows how to tickle the curiosity especially as visually, the app looks quite nice and has an artistic direction close to a SpongeBob cartoon.

Despite everything, that won’t prevent it from being demanding and offering somewhat atypical gameplay, sinceas Hermit Crab, we can change shells on the fly by catching everything that passes, be it a can, a lego or even a glass. The first teaser also allows us to see some platforming phases, but above all rather dynamic fights, and even some bosses who really play it à la Elden Ring.

READ :   A release date for the new expansion of Assassin's Creed: Valhalla

Aggro Crab also announces that its game will be as well cut for lovers of challenge as for neophytes. On the other hand, we will have to wait a little while before being able to put the clamp on this atypical title since Another Crab’s Treasure will not be released until 2023 on Nintendo Switch and PC, at a date yet to be determined.PlayStation versions and Xbox are under studybut without being confirmed.