With Dolmen, the Brazilian studio Massive Work will offer us in 2022 a new one futuristic action-RPG in the third person with also some Lovecraftian touches on the side of monstrosities from another dimension that we will have to face. Published by the Germans of Prime Matter, the premium games label of Koch Media, it will be available on PC, PS4, PS5, Xbox One and Xbox Series next year, without further details. A preview build was however proposed to us in order to make us, as of now, a first idea of what awaits us. So head to Revion Prime.

Live from another world 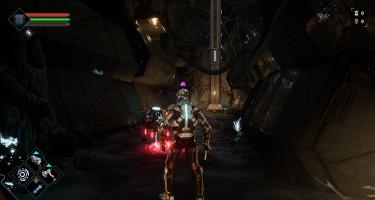 In the more or less distant future, humanity has succeeded in colonize different planets and private firms are fighting to be at the cutting edge in military and technological terms. The Zoan corporation sent genetically modified humans (the Drillers) colonize and study planet Revion Prime, which turns out to be rich in Dolmen crystals. These allow you to create bridges between different dimensions and could thus revolutionize space exploration. Corn an accident happened on the mining station and you are sent there to collect the precious crystals and eliminate the hostile creatures that have infested the place as a result of dimensional cracks. While gradually discovering the secrets that lie in Revion Prime and what happened there, it will therefore be necessary to fight to survive the dangers there.

You are sent there to recover the precious crystals and eliminate the hostile creatures that have infested the place. 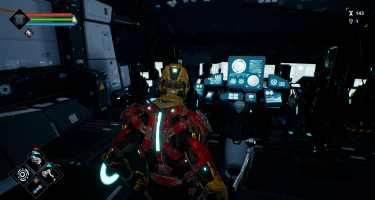 After choosing the name and gender of our character, as well as its class among the 5 proposed (sniper, tank, bounty hunter brilliant by his endurance, hybrid, or simple recruit starting without aid or equipment) and personalized our equipment with some anecdotal colors, we were teleported to the Landfill which is the first of the three areas of the game. In this environment very dirty and dripping, giant spider species have settled in and only moderately appreciate our presence, attacking us on sight. Others hostile creatures, such as some kind of glowing zombies or a stealth swordsman capable of teleporting and using a bubble of protection, occupy the premises. Another area even more dangerous, the Wasteland, was also accessible, with a level and equipment raised for the occasion, on condition of having succeeded in reaching then defeat Dementula, the massive boss of the Junkyard, which is no small task.

You have to know reason to keep 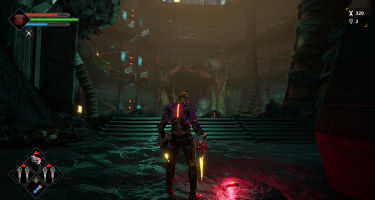 Each of the 3 sectors of the game has its own environment, but also its own enemies, traps and objectives. And the level design is quite labyrinthine, without any map to help us or other direction to follow indicated. Some doors are closed, elevators stuck, and we have to bypass them to unlock them. You also have to know how to turn around and search well so as not to miss anything. In order to put all this in value, the game has been produced under Unreal Engine 4 and even offers the RTX. Without being exceptional, the graphics make the yucky side well wanted and the animations are fluid. The only downside will go in the direction of NPCs with rather ordinary features, even rude. Likewise, the big show cutscenes stage fights a little chopped which give a little cheap side to the title, too bad. This does not prevent thecreepy and oppressive atmosphere places to be present, with effective sound effects and an appropriate soundtrack. As for the situation and the missions entrusted to us, they are explained to us by the tactical support Zoan remained on board the ship, in orbit of Revion Prime. This one speaks to us in English or Portuguese, but French subtitles are available. That said, Dolmen is not a talkative game.

Dynamic battles that are reminiscent of a certain Dark Souls. 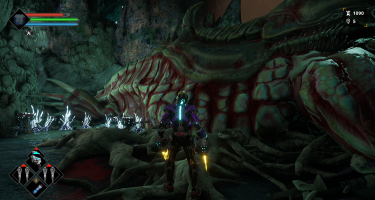 The title is indeed especially valid for its dynamic fights which are far, very far from being a walk in the park, and which remind us of a certain Dark Souls. If you’re the type to go for it and count on your omnipotence, I’m not giving your skin a lot. You will need learn how to make the best use of your equipment, know how to respect the right timing and flee or dodge when necessary. The reading of the fights is generally good but the camera can sometimes be obstructed by the walls, which then complicates matters even more. Playable keyboard-mouse or controller, Dolmen offers a lot of information on the screen to help us, in particular via color codes and other lighting. This makes it easier, for example, to identify the type of attack of each opponent as well as his strengths and weaknesses. There is indeed 4 types of possible damage: physical, fire, ice and acid. And each enemy can be resistant to some and vulnerable to others. Likewise, you might as well protect yourself against the type of damage each person has. It is therefore essential to equip and fight accordingly. In addition, certain attacks identified by a symbol above the head, indicate that they can neither be blocked nor parried, only the dodge makes it possible to escape them. All this brings a rather interesting tactical side to the fights. Hopefully this will last over time and that the title will know enough to renew itself. 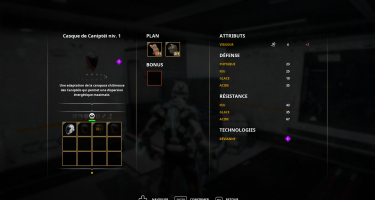 Once the Seba Driller is found, it is possible to return to the ship to improve its attributes (constitution, vigor, energy, strength, dexterity, science) with nanites recovered from defeated monsters which were impregnated with it after the accident. Those nanobots used in mining operations of Revion Prime can indeed be reprogrammed to improve our skills using a module developed by Zoan. This has the effect of increasing our level and it always costs us more nanites each time. However, be careful with choose the enhanced attributes according to the targeted equipment because these require minimum conditions to be able to be used. We must therefore make the right choices. It is also possible, on board, to craft your own gear, which implies having previously explored the places well to collect as much material as possible, especially rare ones. Old equipment can also be dismantled to collect nanites. There are thus 76 pieces of armor that can be crafted (leggings, breastplates, helmets and gauntlets), 8 shields, 25 melee weapons and 12 ranged weapons. But each offers optimization possibilities depending on the material used to synthesize it, which offers many variations possible able to adapt to individual playing style. What’s more, 3 technological paths spread over 9 levels are accessible: human for energy, revian for health and driller for more efficiency in various fields. Once again, the strategy will have to be well thought out here and suitable for target opponents and the desired style of play. 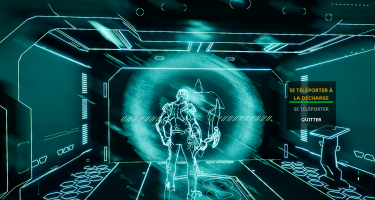 As said before, the challenge is clearly there during the clashes. Initially, getting rid of even a single enemy is already not that simple, but it becomes particularly tough when there are several, especially since some move very fast and that it is very difficult to escape it. It is also recommended to lock your target to avoid typing in the void. What’s more, cramped spaces and other platforms above the void don’t make it easy. In addition to light, heavy or even jumped attacks with the one or two handed melee weapons (axes, swords, spears, gauntlets) and the different combos possible, you should also know be ready at the right time (with a shield or directly with the weapon for those with two hands) in order to benefit from an offensive advantage. It is also possible to block most attacks for sure, while moving, but without anything to the key. The problem is that theendurance required to attack, such as to dodge or run, is limited. It is therefore necessary to know the handle properly, knowing that it regenerates over time. It is also possible to use energy to shoot ranged weapons (pistols, rifles, shotguns, machine guns) in order toactivate sensitivities among our adversaries that we can then to exploit in melee. And it is on this last point, that it is clearly necessary to know how to make the most of it, that Dolmen stands out and brings a little welcome innovation. Finally, an option allows you to spend in energy mode in order to use it for melee combat rather than endurance, not only to aid the latter, but also to benefit from increased damage depending on the reactor equipped (fire, ice or acid). But the amount of energy is also limited. It is therefore necessary to know how to switch from one mode to another.

The respawn point is at the last activated beacon. 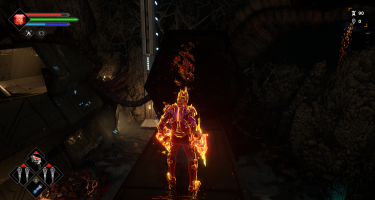 Energy is also used to to heal by consuming half of its bar each time. But beware, this consumption is final and therefore it does not regenerate. The only solution is then touse batteries to recover 50% of the energy. Alone 3 batteries are available at the start, but each boss defeated then allows you to acquire one more. And in order to refuel in health, energy and batteries, just activate the beacons which are scattered in each sector. It is also from these that one can reach the ship. The downside is that it makes all defeated creatures repop. So out of the question to go back to recharge after a difficult passage since it will then be necessary to redo everything. The other solution to get away with everything is to die. The respawn point is then located at the last activated beacon, and it is impossible to make intermediate backups. But do not panic, everything that is acquired (or almost) remains acquired and the unlocked paths remain so. There is therefore no need to necessarily redo everything each time. On the other hand, the chronology is deleted: all the nanites and all the fragments of dolmen collected are lost. To get them back, you have to reach the place of death, symbolized by a bluish body lying on the ground, in order to restore its chronology. In the event of another failure, on the other hand, all is definitely lost..

If Dolmen is presented as a solo adventure, it also has a cooperative dimension. 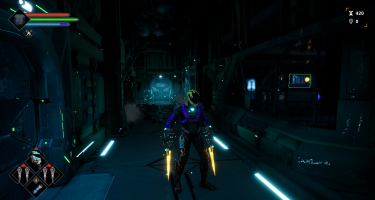 We will end by noting that dolmen crystals are not only the objective of our mission, but they are also useful for boss tags. These are found close to each boss arena and can be used with 3 fragments. Once the taulier is defeated, they allow the respawn in order to be able to farm nanites and necessary materials to craft a boss weapon. It can also be launched from the ship. The other interest is create a multiplayer session allowing you to call on 3 other fighters to come and help you defeat this tough opponent. If Dolmen is presented as a solo adventure, it also has a cooperative dimension to each of the boss fights of the 3 sectors of the game. Unfortunately, this was not really working yet and we could not judge the merits of this option. We will therefore have to wait until next year to be able to indulge in it. 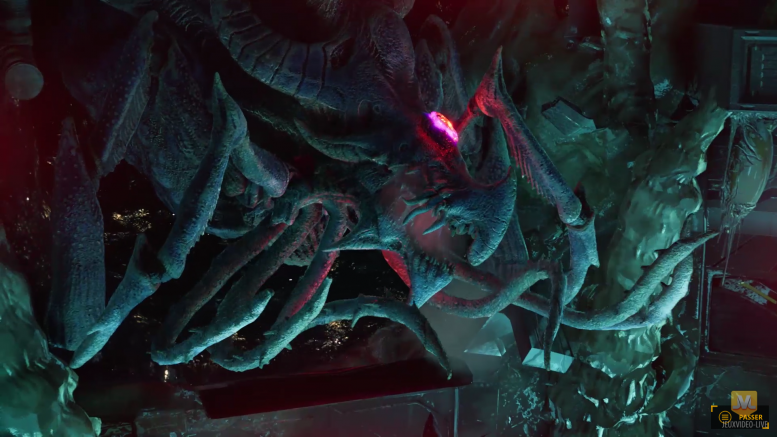