Developed by Gemdrops and Furyuu, to whom we owe the very recent Monark, Crystar is a action RPG where the player crosses a place inhabited by the souls of the deceased: purgatory. An environment and an adventure that some players have already been able to approach during a first outing in 2018 on PS4 and PC. Now it’s the turn of the players from nintendo to discover this title published by NIS America. At least they have that option. But, not sure that it will come true, because, we declare it bluntly, Rei the heroine and her comrades will most certainly find it difficult to seduce you in this journey full of blandness. 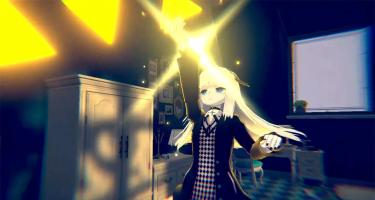 With its story, Crystar goes much deeper than it looks behind its, say, good-natured appearance and tends toward psychological storytelling. However, it fails miserably to create even an ounce of interest in what it is trying to tell.. Why? A question that calls for an equally simple but not so concise answer. There are many problematic elements. If we try to bring an argument spontaneously, it is without hesitation that we will point our big finger at the different characters staged. There really isn’t one to save the other.

Already there is the appearance: while some will appreciate the dress style of these girls, others will deplore it. It’s not the fact that we were given the opportunity to change our outfits, more or less light, on the fly, which is unfortunate. On the contrary, this fantasy seems quite appropriate for this type of game. No, what bothers is this failed attempt to bring a cute side to the heroines, this “kawai” specific to this type of production.. Instead of attracting sympathy from the player, the game manages to do the opposite. It is easy to get annoyed, especially when it comes to the main heroine, namely Rei.

When the adventure opens, the staged character is completely lost. She finds herself in an unknown, dreamlike place, which will be described to her as purgatory. Disguised as a butterfly, having forgotten her identity, she moves on in search of clues until she manages to remember who she is: Rei. And, in the course of her discovery, she will meet her sister, Mirai, also sent to the same world. Both of them will therefore walk the paths available to them and experience difficult events that will shape the destiny of our protagonist: the death of her sister will push her to engage in a contract offered by two demons who promise to resurrect Mirai on condition that she meets their demands, namely to fight the undesirable souls who hang around here and there. And it is therefore with her new powers that she will survey the different areas of purgatory in order to achieve her ends and thus redeem her faults. A quest that will lead him to meet comrades and to bond with. Finally, if you want…

Difficult to lend oneself to the game, when the only feeling that emerges is that of falsity. Everything about Crystar feels overplayed: the relationships created, the emotions borrowed, etc., it all feels fake.

We will therefore find ourselves, as we progress, in the company of a small team, all of whose members have certain abilities and are accompanied by a kind of entity that somehow represents their spiritual strength: the guardians. Within this small meeting of these kinds of “magical girls”, we witness scenes of camaraderie full of good feelings… or almost. Still have to believe it. Everything that is shown to the attention of players is sorely lacking in naturalness. And, instead of giving rise to the desired feeling, empathy, the staging gives rise to quite the opposite in the players. We quickly lose interest, we go through indifference, we go through it and we end up feeling embarrassed, or even more. Rei, in particular, is extremely antipathetic. We had to take pity on her, we end up hating her. Suffice to say that playing Crystar becomes difficult: why continue the adventure with a character that does not belong to us? For the gaming experience it provides, perhaps? But here it is not. 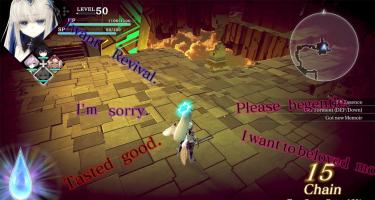 Crystar is a game that is based on its combats. At least, that’s supposed to be the case. But it is not with what is proposed that he will succeed in entertaining. It’s soft! The enemies are mere stooges and they seem to have been integrated for the sole purpose of being part of the scenery. In most cases, they are absolutely useless. It is very well possible to cross entire areas without engaging in any combat. Or almost, since clashes are nevertheless imposed. However, even if all this is not very good, it is strongly advised to go ahead of the enemy to gain experience and acquire new skills. Indeed, by passing from level to level, your characters – which you can choose according to your preferences – acquire new skills. You can assign them four. With them, the damage you inflict will be greater and you will even gain the possibility of engaging in hostilities from a distance. Power is therefore a data that you can improve, but not only. With certain elements, “feelings”, you also influence your life points, defenses, etc.

Why so easy? Why so much laziness? Where is the gaming fun in all of this?

However, whether you increase in strength or not does not matter. It is not your adversaries who will be able to threaten your life. The damage they inflict is relative and, honestly, they spend more of their time avoiding you than actually going towards you. It doesn’t get more annoying. As you move towards them with the attention to do battle, they are in constant motion. You kick, they slip away. Another, same story. When they are in number it’s a little better, you can at least have a touch. A little better, but still not pleasant. Readability is lost in this orgy of strange creatures and bad taste. They are of a kitsch which makes the universe lose all credibility. And then they tend to always be the same. Finally, yes, there is a difference. They may look alike, but they vary. Yes, sir, yes, madam, they vary: they change color…

This deficiency of reaction which we have just spoken of, we also deplore in the bosses. Which is unfortunate, but not as much as the lack of diversity in their attacks. The confrontations are therefore even longer than those we have with ordinary enemies, which is already not nothing. A slowness that can slightly accelerate if we call on the strength of the entity mentioned above: the Guardian. However, you can’t rely on his strength at any time, since he can only be summoned when a “tears gauge” is filled to the max..

To sum up, what we remember from these boss fights, cis that there is no challenge, no pleasure, nothing. Admittedly, by taking their blows your life points decrease more quickly, however it is not enough to hurt you. But if that happens, you are allowed to regain your strength with various items that you buy from a merchant. Where you can also make possession of different objects countering various spells (paralysis, poison, etc.) of which you will be the target.

O world! Where has your soul gone? 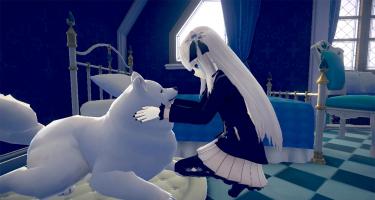 Once the prologue has passed, the introductory phase used to lay the foundations for the story (cited above), an opening cinematic similar to that of an anime sets the tone and raises the expectations of the players. The artistic paste that we owe to the animation studio Shaft, which also produced the anime from which the game seems to be inspired, is remarkable. However, it places the ambition a little too high, because the title does not allow it to be met. Not that the aesthetic composition is really bad, no, it’s even the opposite. There is a certain style. The decors that surround us have allure and the colors used give a particular tone, giving the work a dreamlike aspect. However, here again, we face a lack of inspiration. The paths, the levels, that we go through give a curious impression of deja vu.

On the technical side, on the other hand, it is much less attractive, it is outdated. Aliasing is ubiquitous and clipping is commonplace. The cinematics are poor. They borrow the engine of the game, which gives things not very pretty. The movements of the characters are rigid, slow and above all very bland. And then let’s not talk about lip synchronization, there is no harmony with the voice. It gives something superficial, like an articulated doll.

But this kind of scenes are really not highlighted by the game and are quite rare. They are masked by the appearance of a fixed illustration – the representation of a character – which lights up and takes on different expressions when it dialogues. Basically, most of the time, cutscenes are like a kind of skit, a bit like a visual novel. A kind of misery cache that still does not manage to raise the level, because even the character traits that we read on the faces of the characters tend to repeat themselves.

Conversations that benefit from a Japanese dubbing – arguably preferable to its English counterpart – which adds further annoyance. The tone as well as the overplay exacerbates the unbearable character of the heroines. As for the music, they are not ugly, just a little too withdrawn and sometimes seem out of place sometimes, a little too catchy for a place where dread, and not magic, is supposed to take precedence. 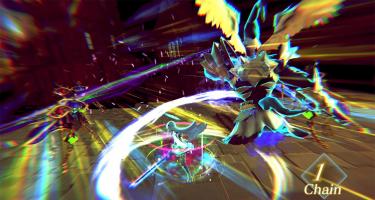 Yes, Crystar is not exactly a joy. We go on, in an endless repetitiveness, corridor after corridor in a rather strange pace, given the rather bizarre, very robotic approach of the heroine or rather the heroines since we have the possibility of changing character when good seems to us. We fight lifeless puppets in unfavorable conditions, the locking system being very perfectible. And, one is easily annoyed by all the groans and exclamations emitted during the confrontations as well as by the reaction time when one wishes to dodge. An annoyance greatly amplified when one invokes the strength of the guardian specific to each character. So the previously correct colors takes a psychedelic twist and is accompanied by a black background obscuring the decor.

Admittedly, an obvious lack of resources has affected development, but should the unfortunate aspects be neglected and treated with respect? It’s up to you, but it is advisable to wait until you can play it at a lower price. In this way, perhaps, you could avoid taking a cold shower in front of this title which is similar to a video game nanar.