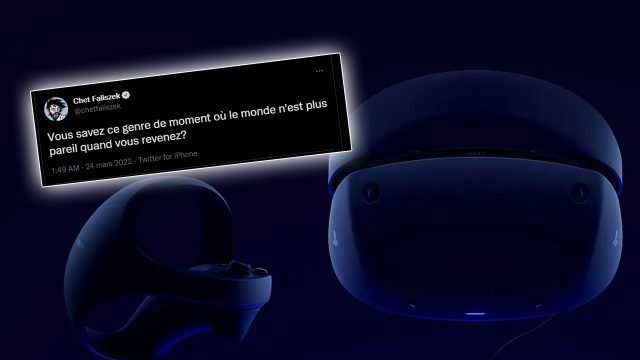 On the occasion of the GDC 2022 which is taking place at the moment, developers were able to try Sony’s new VR headset. And one of them seems very conquered by the object.

Developers were able to have test versions of PlayStation’s new virtual reality headset, the PSVR 2, on the occasion of the Game Developers Conference which is happening right now. And according to them, it “kills serious” (rough translation). In any case, this is what we can read on the twitter of Chet Faliszek, boss of indie studio Stray Bombay.

You know where the world just looks different when you come back?

You know where the world just feels different when you return?

Sooooo good… thanks @yosp and @GregRicey for the demo and chat.

In addition to the former scriptwriter of Half-Life and Portalother developers participated in the presentation session and were able to put on Sony’s new VR headset visibly.

The video game B2B fair seems to be very PSVR 2 oriented this year: a few days ago, Unity had announced to discuss the technological advances of its physics engine for the PS5 headset.

If the release of the machine is not yet officially set, several rumors go in the direction of an announcement very soon and a release for the holiday season or the very beginning of 2023. In the meantime, you can still drool over the official images.