Blizzard’s hack’n slash may have received heavy criticism and become the worst game of all time on Metacritic, but it’s still a great success.

Released on June 2 on mobile and PC, Diablo Immortal quickly got destroyed by the community for its exaggerated pay-to-win tendencies which, according to calculations, would require several thousand euros to have an optimized character. But will that stop him? No, the game is a real success for Blizzard, which is already pocketing a nice jackpot.

As the app continues to get pruned on social media and now finds itself with the worst user rating of all time on Metacritic (0.2 for almost 4000 reviews)Diablo Immortal would have become the publisher’s new goose. 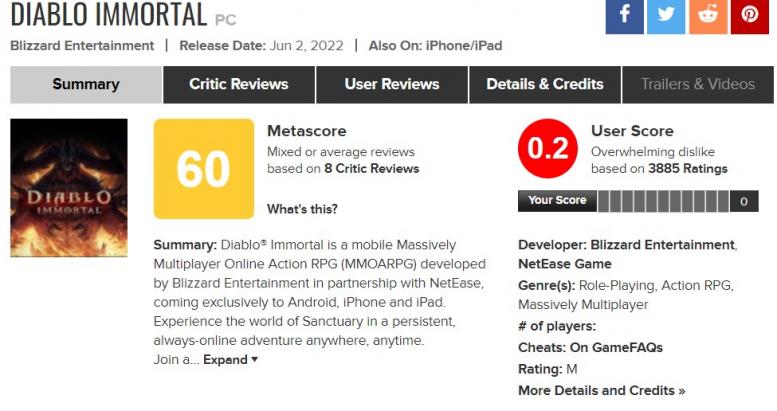 After almost 20 days of operation, Diablo Immortal reportedly already grossed over $25 million. A more than correct figure, especially since the software would have been downloaded nearly 8.5 million times. Microtransactions, and even aggressive monetization policies, therefore still have a very bright future ahead of them.

The game therefore slips through the cracks and allows Blizzard to rest on his two ears since his foal is a success. The players respond present and even go to the cash register, life is good for the publisher which is preparing its real comeback with Diablo 4.