Techland announces that it wants to push back its big narrative DLC, but says that there will be many surprises while waiting for its release.

With a roadmap that provides content for the next 5 years, Techland has a full bakery on the board. The studio had also announced the imminent arrival of its first narrative DLC, but admits to having spoken a little too quickly.

Sold as a story set parallel to the events of the main game, Dying Light 2’s scripted DLC won’t be released until September according to Techland. The studio admits to having taken longer than expected to develop the content requested by the community (such as the NG+ mode for example), and wishes to be able to guarantee a quality extension and experience.

Despite this bad news, the developers announce that content will continue to flow during the summer while waiting for the release of the DLC. A first chapter entitled “In the footsteps of a Nightrunner” will arrive in June and will embark multiple events, exclusive content, photo mode and “more”. The least we can say is that Techland is not idle, and it is not the recent big updates of the first Dying Light that will make us say the opposite. 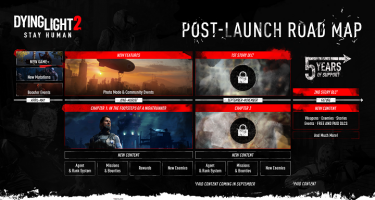