In its financial report, EA revealed the calendar of its next sports releases (F1, Madden NFL, Need For Speed, NHL …) but also four unannounced titles.

The conference related to results of the last quarter and ambitions for fiscal year 2023 was an opportunity for Electronic Arts to make many announcements. The main one, of course, is the end of the contract with FIFA and therefore the transformation of its cult license, which was about to celebrate its 30th anniversary, into EA Sports FC. A game will be released in 2023 under this new name.

But that’s not all. In its report, EA already announces the releases of F1 22 (its new sports license following the acquisition of Codemasters) in the 1st quarter of the 2023 fiscal calendar (which ends on July 2). Then EA Sports FC and Madden NFL in the second quarter (thus between July and September), and Need For Speed ​​and EA Sports NHL in Q3 (from October to December). 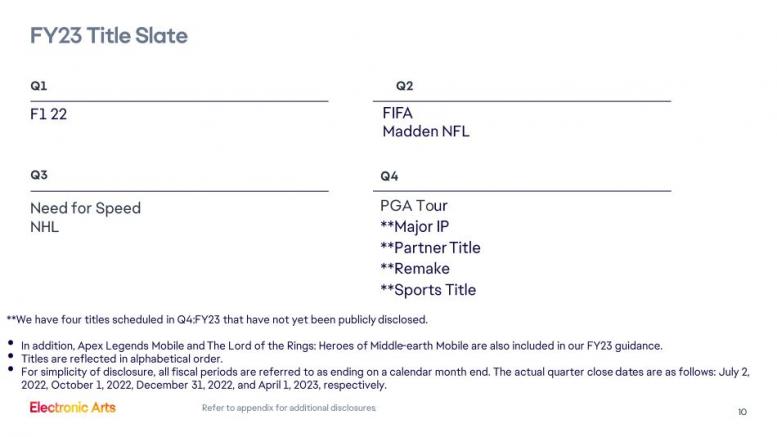 For the 4th quarter, beginning of 2023, another franchise is already planned: PGA Tour, a return after a stint at 2K Sports (the company that could recover the rights from FIFA to create the competitor to EA Sports FC). Four other titles are also teased by the company for Spring 2023: a major returning IP, a remake, a new sports game and a “partner title”. At Respawn for example with Star Wars?

READ :   Resident Evil teases an announcement for this Tuesday morning

On the side of the major IP, we can also hope for the new Dragon Age or Mass Effect. However, a small mention indicates that these 4 unannounced titles have not yet been publicly revealed, which could rule out these tracks. We are not immune to the official announcement of the return of EA Sports College Footballanother licensed sports game that will expand the EA Sports catalog.