Thanks to the “wishlist” function of the PC platform, Steam has discovered a highly anticipated new game from its database, which goes beyond the hype of Dying Light 2.

As on many sites, Steam allows its users to put a game on their “wishlist”, namely to be informed in real time of all the novelties associated with his news, and above all to be warned as quickly as possible (and to warn his friends) of the intention to break his PEL at the launch of pre-orders or the purchase of the game.

Overtaking the previous title holder who will arrive around the same time, Dying Light 2, Elden Ring has just risen to the top of the community’s most anticipated games, a month before its release. According to the stats of SteamDB, FromSoftware’s RPG is now ahead of Techland’s title.

Unfortunately, it is impossible to have the exact figure the number of people who have declared an interest in the game. Elden Ring isn’t even the most “watched” game on Steam, since despite his 280,000 followers, he is only second behind Party Animals. The latter is also the third most “wishlisted” game. 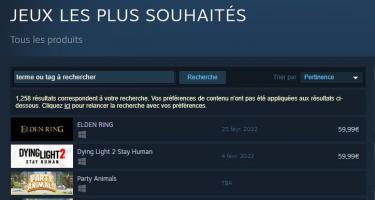