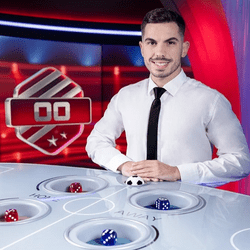 One of the reasons why the prestigious Evolution software has become a household name in the online casino industry is that it regularly releases new live games.

After for example Gold Bar Roulette but also Crazy Coin Flip among others, he is about to launch Football Studio Dice.

This future gaming table with live dealer is undoubtedly reminiscent of a mix between Bac Bo on the one hand for the game operation and Football Studio on the other for the sports atmosphere.

This is a promising cocktail that deserves a closer look. It is worth mentioning that this online soccer game will be available at the excellent online casino MagicalSpin.

During the month of January 2022, the Evolution software had the excellent idea of launching a dice game inspired by baccarat. Called Bac Bo, it offers extremely simple but very addictive rules which are also found in the main lines of the future Football Studio Dice.

You can choose either Home or Away to try and take advantage of a 1:1 payout ratio, and these bets have a 97.75% payout to players. Instead, it is also possible to bet on a tie with a 95.68% payout.

If the sum of the dice of both teams is the same, then we win 8 times our bet, except with a total of 12. In this case, we get no less than 80 times our bet!

A sporting atmosphere for football fans

It was during the month of June 2018 that the publisher Evolution released the table with live dealer Football Studio. The latter is strongly inspired by the rules of dragon tiger while immersing us in a very pleasant sports atmosphere.

READ :   Good results for Partouche in the last six months

With its upcoming game Football Studio Dice, the prestigious software is once again targeting football fans. The games are filmed in an extremely neat setting that evokes the recording studio of a television program dedicated to sports.

In fact, the table even represents a soccer field.

To further enhance the immersion, all the dice are not drawn at the same time. A bit like a game that is divided into 2 halves, there is first only one die per team that is rolled.

Then, very quickly after finding out the result of this first roll, the second is drawn. This adds a little more suspense to the game.

Very promising, the Football Studio Dice live dealer table from Evolution software will be released very soon. We advise you to watch out for its launch at the excellent online casino Magical Spin.