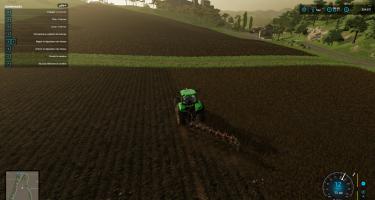 The famous agricultural simulation license is back after three years of absence. In fact, 2020 had been dedicated to mobile platforms as well as to the Nintendo Switch, and no opus was released in 2021. This low period did not that increase the expectations of the players, especially since the 2019 edition did not make a big impression, many players had found the innovations proposed insufficient. This test is an opportunity to see if Giants Software has been able to work on the faults of previous opus to provide us with an episode that lived up to our expectations. Farming Simulator 2022 also marks a turning point in the life of Giants who broke up with Focus Entertainment in order to self-publish, which implies a whole new freedom for developers.

For those who have never heard of it, Farming Simulator is a farm management and simulation game in which you are in charge of the entirety of a large corporation. Planting, harvesting, breeding, selling and setting up production chains, you will need to be versatile and organized to grow your business. 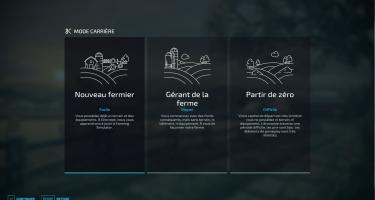 When you start a new game, the game lets you choose between three difficulty levels. The former will get you started with enough equipment to start your business straight away, while the latter will start you from scratch. But the reality behind it all is that if you are a newbie, you will struggle no matter what. It makes you wonder if the easy mode, in which you land on a huge map with a large amount of unknown gear, is really that simple. One thing is certain, do not rely on the interface or on the help topics to save you, you will have to fend for yourself. Even the tutorial falls short of teaching you everything there is to know. There is indeed the Farming Simulator Academy, but the latter is not yet complete. Yet the introductory cinematic, presenting a young girl learning the trade with what seems to be her father, suggested that this opus might be endowed a scenario and a real goal to achieve. On the other hand, if you are used to the license, you will quickly find your marks, because the mechanics are generally identical.

To live your agricultural adventure, you will also have to choose from three different maps. This is more than the two cards we were traditionally entitled to in the old games. Well, it should be noted that one of them is taken from a 2019 edition DLC, but let’s assume that not everyone benefited from it. 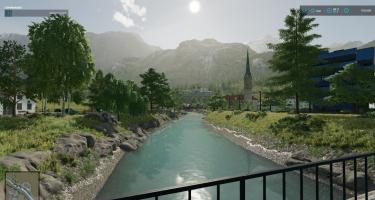 And this map is Erlengrat, which was integrated into the game when the DLC was released Alpine Farming Extension. It pays homage to mountainous regions of the Alps thanks to vast snow-covered meadows. It is ideal for breeding, even if nothing prevents you from practicing agriculture in its many fields. 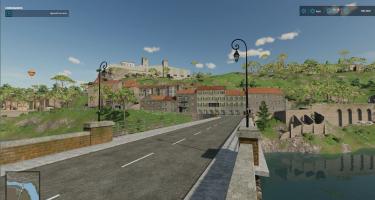 The second is unpublished, it is the Haut-Beyleron. Inspired by New Aquitaine and Provence, it is dedicated to the landscapes of the south of France. On the program: gondolas, traditional villages and typical castles to explore. Thanks to a fairly hybrid terrain, it will allow you to devote yourself to breeding, but also to discover viticulture, a novelty that I will talk about a little later. 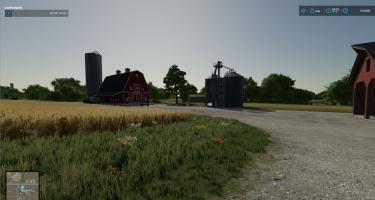 The third, Elmecreek is a card whose decoration is from the American Midwest, its setting is rural, green and vintage. It has several new buildings such as a baseball stadium or a bowling alley, but also canyons and gigantic caves. It offers more than 80 fields, favoring extensive crops such as potatoes or cereals. 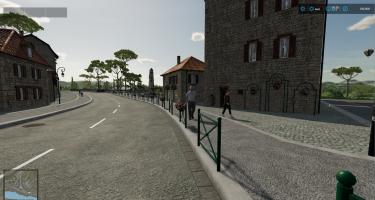 Beyond their appearance, we feel that a (small) effort has been made to make them more alive: You will now find NPCs roaming the streets by your side. Of course, they always follow the same path, of course we see them appear at the end of every street, but the difference is there. The AI ​​of vehicles is also not the best quality, as they are the cause of collisions regularly, but they will keep you company on the road. 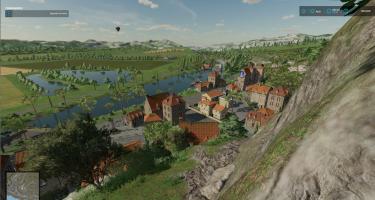 Even if they are not very alive, there are still things to see on each map, Giants encourages players to explore. The journeys between the fields are less monotonous when looking at the landscape and one is often tempted to make small detours. We are far from an open world a la Skyrim, but pick-up rides are pleasant, above all thanks to a marked improvement in the viewing distance.

READ :   Green Hell VR on demo at Steam Next Festival 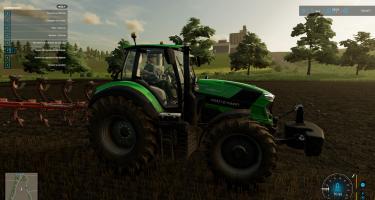 Exactly, let’s focus on the graphics for a few moments. They are more detailed than in previous editions and franchise regulars will no doubt notice. However, it is well below what is currently done. Even though the studio improves its graphics engine every year, we can’t help but be a little disappointed, especially after such a long period of absence. The whole certainly seems less dated, but it is insufficient.

Where there is a positive development, it’s in vehicle modeling. It cannot be denied that in this area, Farming Simulator excels. It is a real gold mine for lovers of machinery: more than 400 machines from 100 different brands are reproduced in great detail, and the realism is stunning. Even the interiors have been carefully crafted to be as identical as possible to reality. Same side sound design, we can hardly do better, the sound changes between each gear and you will even hear your engine coughing in the ribs. In terms of welcome additions, we can also note the dust that your driving produces, the tire tracks on the ground as well as plants that flatten out when you ride on it.

The system of seasons and new crops 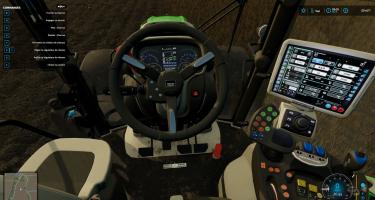 Let’s move on to agricultural innovations. The addition of the four seasons was a much anticipated feature, even if the community had long since made up for the lack by creating effective and free mods. Here, in addition to varying the colors of the landscape, the seasons have a strong impact on crops since you will now have to respect a strict schedule. Plantations can no longer be done at any time otherwise they will be a total failure. You can always advance the time (from x1 to x120) and sleep to skip the months, but you will not escape the organization of your crops, otherwise you will run out of resources. 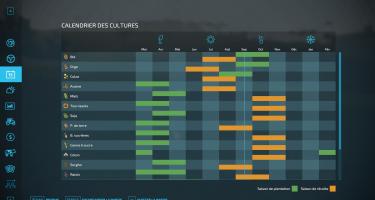 In contrast, Farming Simulator has thought of everything and you won’t find yourself idle. Winter, you will have the possibility to install greenhouses on your fields, inside which your crops will grow in all seasons. And if that’s not enough for you, you can always climb into your snow plow to clear the roads and ensure efficient deliveries, or prepare your fields for the following year. The rest of the year, you just need to follow the cultivation calendar to plant and harvest your crops.

For regulars who would still be afraid of getting bored, know that Farming Simulator 2022 gets three new crops: grapes, olives and sorghum. Let’s move quickly to sorghum, because it’s just a new grain adding to the list. 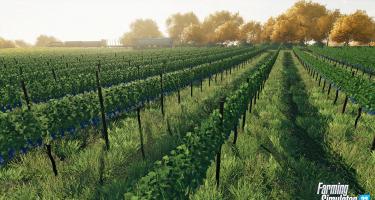 Regarding grapes, you can plant traditional vines thanks to new special equipment, preferably between March and June for a harvest between September and October. Once the harvest is over, the grapes can be transformed into juice or dried fruits to be resold. It’s the same for the olives that will be used to produce oil which will bring you profit.

That’s not all, Giants also gives you the possibility to start a career as a beekeeper. You will have at your disposal several kinds of beehives of various sizes that you can place in different places on the map. Once the honey is harvested, you can either sell it as is or integrate it into a production chain. to make cereals, for example. Hives also play an important role in your crops, because they promote pollination, thus rapeseed or sunflowers will see their production increased near the latter.

Sadly, breeding is always neglected: no improvement has been made in this opus other than a slight graphic overhaul of the animals. It boils down to feeding, drinking and cleaning animals that are piled on top of each other.

The novelty of production chains 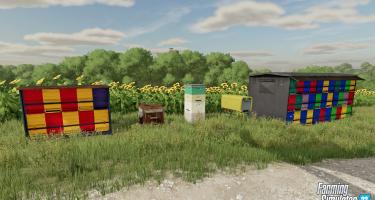 Once your crops are harvested, you will no longer have to sell your wheat as is thanks to integration of production chains, the great novelty of this opus. You will now be able to” buy different companies, such as a mill to turn your wheat into flour, or a bakery to turn your flour into bread. Cotton can also be transformed into fabric, then into clothing, grapes into grape juice or raisins, etc. After production, the factory you own can automatically take care of the sale. If you want to do it yourself, it will produce a pallet that you can deliver to supermarkets or markets. This feature gives the game a lot more meaning, breaks the monotony and allows you to further develop your farm. We get closer and closer management game. 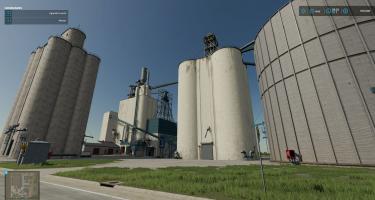 To facilitate this aspect of the game, Giants has greatly improved employee utilization. In Farming Simulator 2019, you had to place the tractor correctly in the field first before starting your worker, now the worker is much more autonomous, will go to the field himself, saving you a lot of time. Regarding the work in the different factories that you own, employees can load and deliver goods completely autonomously, they can even do it in a loop and repeat the same task over and over again, as long as there is plenty to do. 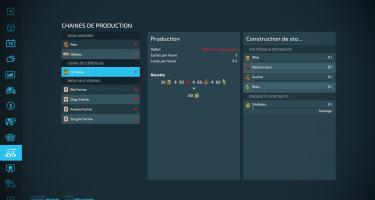 Production chains also give meaning to multiplayer, which becomes cross-platform in this opus. Everyone can take charge of one aspect of the chain and thus create real teamwork. In contrast, Farming Simulator will not provide you no explanation regarding the functionalities of the production lines. The game leaves you struggling to figure out what to do. You will find clues on the procedure to follow in the menus and even if you search well, because they are far from clear. Giants has, again, made very little effort to make his license understandable and accessible quickly, which sometimes makes you really want to give up.