After many rather charming visuals, Firegirl finally arrives on PC and will offer a console release later next year. Rogue-lite at heart, the software intends to dig its hole in the middle, especially with its rather original context. Exit the big guns, the random perks and the armies of monsters who drop loot, in Firegirl we are a fire fighter who saves pink kittens, but not only … 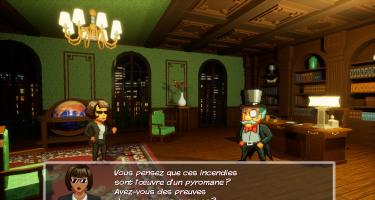 Firegirl (since it is also the name of the heroine) barely begins her training as a firefighter at the barracks when she finds herself caught in the center ofa surrealist conspiracy, halfway between a disaster film and Ghostbusters.

It is therefore in this context that we will be asked to go and save lives, as best we can, while trying to understand what is happening. We are not going to lie to each other, the script is only there to offer a subject, funny dialogues and a big dose of fun with an omnipresent second degree. No need to dwell on it any longer. So what interests us above all here is the gameplay which is rather atypical. It must be said that playing apprentice firefighters is quite rare, and facing supernatural entities who have fire in their asses, it is even more so.

All in horizontal scrolling, in colorful and successful pixel-art (except the decorations which benefit from a more traditional modeling, but just as solid) and accompanied by very punchy electronic sounds (music with tones accompanying our successes), Firegirl is reminiscent of those games of yesteryear, the ones that robbed our wallets in arcades.

Firegirl is reminiscent of those games of yesteryear, the ones that robbed our wallets in arcades 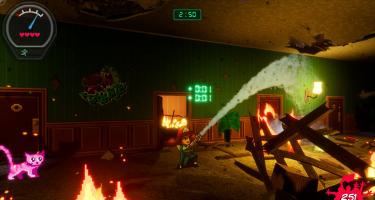 Each mission is procedurally created among a multitude of biomes (buildings, moving train, forest…) in which we must systematically save a fixed number of NPCs and extract ourselves, all within a given time. But obviously, it’s not that simple. On the one hand, you have to play against the clock, which increases the pressure, then you have to be careful not to get hit too many times by the enemies and / or the traps that litter the levels sinceit will only take a few shots to pass the weapon to the left. Finally, we only have an ax to destroy obstacles and a spear which we will use to eliminate opponents, clear a path by extinguishing the flames but also reach ledges using it as a jet pack.

The thing is, the water is not unlimited, our tank empties with each action and will only fill up if you find a source of water (item, piping in the decor …) which is quite rare , and above all, random. The first missions are therefore really difficult and the victories quite rare., as our starting equipment is quite weak, the stopwatch really short and the level design ruthless. We are constantly pushed forward and it is therefore our judgment and our reflexes that will do most of the work., but without the gear it’s complicated. Fortunately, there are big ways to improve all of this. For skill on the other hand …

It’s classic, but we want more 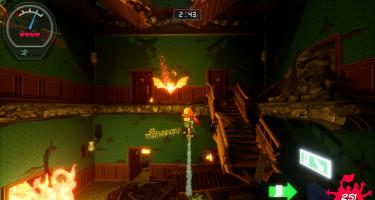 We will therefore have to try to accumulate a few dollars by completing the objectives as best we can. We will also be able to recover pink kittens and other animals lost in the rubble to increase our popularity with a fan base who will then be able to make donations and increase our fundraiser.

READ :   Space adventure game Exo One will also be released on PS4 and PS5

And it is on this formula, classic, that rests all the rogue-lite aspect of the software since it is in a hub, our fire station, that we will spend our steaks. The latter will provide us with various services, such as merchants to improve our equipment, or a medal cabinet serving here as a passive skill to equip. Over the course of the adventure, we can also recruit several characters who will give us a little help by unlocking new rooms (canteen, infirmary, rest room, etc.). It mostly translates to a large amount of bonus to buy to make our job easier, affecting all game parameters. We can thus have more time to carry out our missions, improve the effect of the care kits or even reduce the cost of all our expenses (merchants and improvements).

Quickly, we gain in power, the difficulty is reduced and we sink further and further into the missions which, too, are becoming more and more intense and fraught with danger. Nevertheless, we really feel that we are progressing and the formula quickly becomes addictive. We will sometimes even want to launch one or two quick runs, since the format lends itself perfectly to it, the missions never exceeding a handful of minutes.