Developed in collaboration by the two independent Colombian studios SYCK and Dreams Incorporated, Cris Tales is a title announced at E3 2019 and published by the Californians of Modus Games. While this one was scheduled for November 2020 before being postponed, it will finally be released on July 20, 2021 on PC, PS4, PS5, Xbox One, Xbox Series, Switch and Stadia. The opportunity having been given to us to attend in preview at the presentation of this JRPG through Derek Neal, executive producer at Modus Games, we weren’t going to say no. 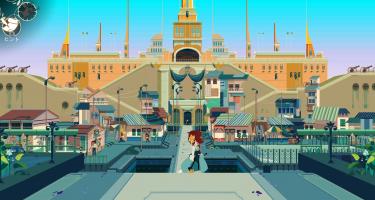 In Cris Tales, you will accompany Crisbell, a young girl seeking to defend the city of Narim and the orphanage where she grew up attacks from goblins and other nasty aggressors. But she is not alone, she is accompanied by Matias, a talking topper frog. She can also tell about the support from other friends, like Wilhem, a time mage, just like her.

In order to face the opposing forces, it has indeed powers called Crystals of Time which allow him to fracture it in order tointervene in the past to modify the present and in the present to influence the future. Several futures are then possible and being able to see the one about to arrive allows you to see the consequences of their actions and to choose them accordingly. 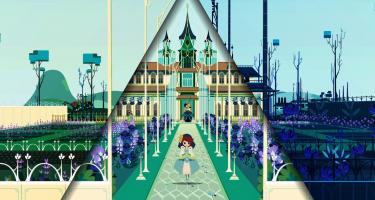 Knowing that the future that awaits the orphanage and the city is far from bright since these will be destroyed and abandoned, Crisbell will do everything to prevent it from happening. But not all enemies will be as easy to defeat as Goblins, the time emperor and his generals pose a much greater danger. 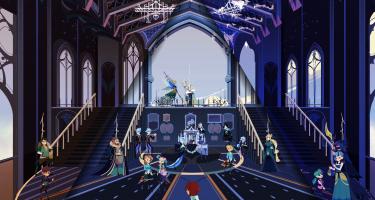 If for now the title that you can try thanks to the demo available on Steam, is only in English with English subtitles, French subtitles are planned for the game’s release. Keeping the original vocals is not a bad thing, because these are very pleasant, accompanied by bubbles in the foreground during the discussions. Presented as “a homage to classic JRPGs like Final Fantasy, Chrono Trigger, Persona, among other franchises ”, he fully assumes his Japanese anime style. And the lovely colorful hand drawn visuals that it offers are rather successful. Note that we also find here influences from the Colombian culture and architecture.

The music that accompanies you is also very nice, with a soundtrack of 60 songs, each specific to a region, kingdom or dungeon. For example, this allows you to go from a zen and airy atmosphere to something much more epic in crucial moments such as during battles. Note that the main theme is signed by the Japanese saxophonist and composer Norihiko Hibino (Metal Gear Solid, Bayoneta, Yu-Gi-Oh !, Yakuza 2) and that the rest of the composition is by Tyson Wernli (Super Mario World). 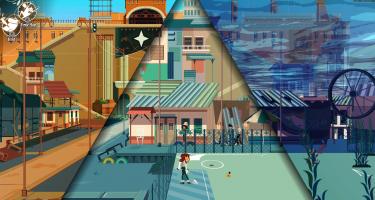 The concept of display 3 different eras on the screen with a pyramidal representation of the present to the left of which is the past and to the right the future, works really well. By moving, we also move the temporal zone, and all the characters and all the elements of the scenery, including the flora and fauna, evolve. It was therefore necessary for each NPC and each environmental component, 3 different versions. And like several branches of history are possible, it has multiplied even more the options to be planned, which still represents a substantial amount of work.

READ :   Survival Quiz CITY, a Battle Royale based on... quizzes

Back to the past of the future of the present 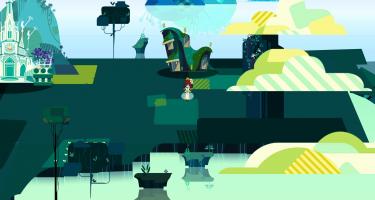 Derek Neal’s presentation reminded us that the game is not limited to the city of Narim and that it is possible to move between different places by navigating by a symbolic map showing the various possible destinations, once they are unlocked. We can get there on foot with a small figurative character, but also by employing various upgradable means of locomotion, including through the air. The introductory sequence to the presentation allowed us to see, for example, that all was not going to go as planned for Crisbell and his friends when they arrived in Ash and that the town would be destroyed by a lava flow. We can then sail on it to go from one point to another usinga boat in the shape of a shoe.

Without surprise, the fights are done in turn by following a timeline and Crisbell can just as easily participate alone asaccompanied by two partners. There is indeed 7 playable characters in the game. Everyone, once their turn has come, can attack, pass, use an object to benefit from a buff or resuscitate an ally, or of course use their temporal powers if they are endowed with them. These are games like Paper Mario or Legend of Dragoon, which served as inspiration. And as in other RPGs of the genre, you will access new powers and other skills making you more and more powerful as you progress. But beware, because as formidable as they are, your powers can be turned against you by bosses. The game, which should keep you busy about thirty hours, also offers dungeons alongside the unfolding of its history, with treasures to boot. These offer random battles and each has mechanics specific to it and that you will have to learn to master in order to solve puzzles. For example, we visited one of them where it was about moving blocks and using teleporters sometimes reversing gravity, all through two platforms connected to each other by elevators where you are waiting every time a fight. 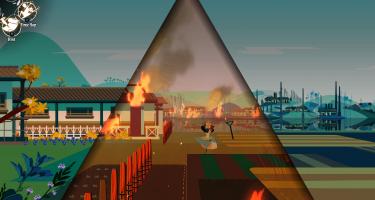 As all the characters have their own abilities, this allows interesting combinations which will continue to multiply with the acquisition of new skills. One of them can for example move an enemy from one side of the battlefield to the other. However, we know that when using Time Crystals, it is the past version of a character who is on the left, while it is his future version that is found on the right. Each enemy can thus be aged or rejuvenated as the case may be. And by exercising a lasting effect in the past, the cumulative result is then applied in the present or the future. We can clearly see here the interest that this can have with poison or fire for example. You will therefore have to choose your team well. As for Matias, our tetrapod friend, it has the advantage of being able to perform time jumps and therefore go to the past or the future, alternately becoming a tadpole, a young batrachian or an old frog. This faculty makes it possible to bring back objects from another time in the present or simply fromobtain informations by going directly to look for it in the epoch concerned.

And since beautiful images are even more meaningful, we will end with 17 minutes of gameplay just for you.