It’s been a little less than a year since players computer were able to approach GetsuFumaDen: Undiying Moon. Previously available in Early Access on Steamthe title edited by Konami has recently joined the catalog of the Nintendo Switch (via eShop). It is this version that we are going to deal with. But, rather than asking the question of the port – difficult to make a comparison when you don’t know the previous version – we will focus on the gaming experience offered by this side-scrolling rogue-lite. Let’s go to the depths of the earth, to encounter nameless abominations, for a brief review of the title. And, one thing is certain, in the depths of hell, it is hot, very hot.

A Journey to the Depths of Hell 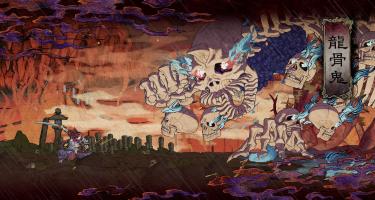 Hell opens and its creatures pour down to Earth. The end of the world is here. She only waits for her lieutenants, her loyal followers, to act on her behalf. However, they will not have time, a samurai named Getsu Fuma goes to the lair of evil to put an end to this threat. This is the mission incumbent on his clan, of which he is the leader. Such is the scenario, or rather the frame, of this title.

The painting of this unhealthy place seems faithful to Shinto mythology, at least it is inspired by it. All the representative bestiary of Japanese folklore is present there: the club-wielding ogre, the Gashadokuro (the hungry skeleton), the Kitsune (the nine-tailed fox)… And, on top of that, everything is done to make hell hell. Quesaco? To put it more simply, without a very obscure formula, GetsuFumaDen manages very well to convey all the sinister side of the place. If you strain your ears, you can hear the cries of the unfortunate damned. Or, when brushing against the corpse of the hanged men who dot our path here and there (at least in certain levels), the sounds of their members collide. Gloomy but satisfying. Anyway, for this kind of place, we expected no less.

Noises, this sound design, combines a graphic quality – all in Cell Shading – more than generous, and this, even on the modest Nintendo machine. It is certainly very colorful, but that does not take away all the horrific weight of this little world and all the brood that is there. No, on the contrary, the artistic style only generates added value.

GetsuFumaDen is a painting full of life 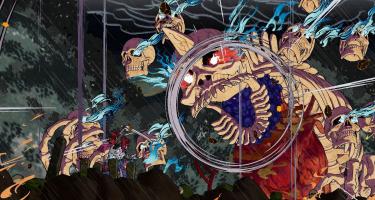 Let’s say that aesthetically, GetsuFumaDen offers us a vision of hell full of pretty ugliness, including sumptuous backgrounds. Which gives the impression of browsing a table full of life. For this, we can only applaud the reuse of the style that gives a real Japanese identity: Ukiyo-e. To make it clearer, this Japanese artistic movement highlighted the production of prints. It had at its head, or at least this is the name that is best known to us in Europe, an artist by the name of Hokusai. You know, the man to whom we owe the famous depiction of Mount Fuji. Or, to give you an idea of ​​what Ukiyo-e is, let’s use a more recent and more popular model: a certain manga with planetary success – rightly or wrongly, it doesn’t matter – that we don’t mention no longer, the aptly named Koyoharu Got?ge’s Demon Slayer.

So it’s pretty and the musical composition is not left out. Sometimes sporting a traditional style, it proudly accompanies the hero’s little adventure with traditional, rock and sinister sounds.

Dying is not an end, it is the solution! 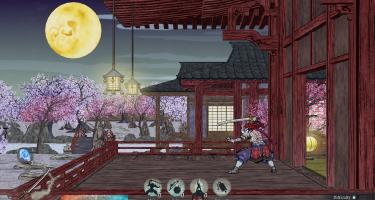 The trials that await the character are daunting. He will obviously have to fight but also avoid a large number of obstacles, such as spikes planted here and there. Death is within reach of every confrontation, but hey, you know what they say: rogue-lite obliges. Once the defeat is effective, you will return to the mansion. And there will be plenty of feedback. But, each time, you will be different, more powerful and resistant. During your journey, you will collect the elements necessary for your development. However, how long will it take you to become able to venture further on your journey? Because yes, it will be long, very long.

In this hub, it will indeed be possible – and even not negligible – to perfect your skills. Survival, or rather your progress, in a future run depends on it. Some items recovered before death are kept. On the contrary, the weapons disappear. Only their improvement remains. And so, with each attempt, your attacks will be more effective than before. To do this, to increase the level of your weapons or even create them, you will need to have the necessary equipment that you will acquire by stripping your defeated enemies. 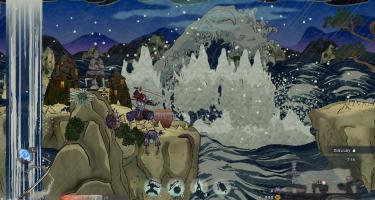 By the way, when it comes to weapons, there are two categories: primary weapons and secondary weapons. The first are all that is handguns. If some are unique – in one copy what –, others come in pairs (double katana, double leaf, etc.). As for those in the second section, they are more focused on ranged attack (bow, musket, etc.). These weapons all have a rank. The higher the rank, the more effective the weapon becomes. Each of the two categories cannot present more than two weapons.

READ :   Horizon Forbidden West: Patch 1.08 is out and takes care of quests

If the aforementioned improvements are conserved, it is not the same for the others. These are acquired by collecting blue souls and can increase the power of your two types of weapons or multiply your health gauge. It’s up to you to see how you will play the shot according to your needs.

Everything you’ll need is inside one dimension accessible through portals scattered throughout the levels. These are yellow in color and are to be distinguished from their blue counterparts, which rather allow movement through each area of ​​the level. This will allow you to easily return to certain places, for example, to continue the exploration abandoned before in favor of something else.

Find your way through the maze of hell 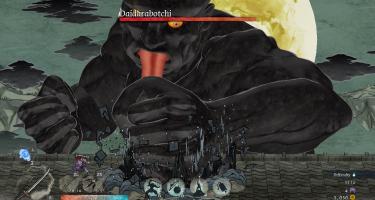 And so, as shown by this ease of movement by teleportation and this tendency to explore, another genre is indeed present in GetsuFumaDen: the Metroidvania. Jumping from platform to platform, running around to finally find yourself in a dead end, this is what the title has in store. A classic path to say the least that suffers from a small defect: our avatar is heavy. The jumps are then only more complicated to perform. Sometimes you have to try several times before reaching a ledge and be precise enough not to fall. And, while a fall has no effect on your health bar, it’s still annoying. But, that is the only small concern that we can raise. When it comes to attacks and other moves, they’re quite fluid. We have nothing to complain about on that side.

Exploration is necessary and it will have to be repeated several times during any attempt to be able to hope to recover something to improve. One thing is certain, the path to becoming stronger is long, very long. You will indeed spend many hours there. This can be tedious, but it can only be useful to you, especially against bosses whose size and appearance are impressive.