Translating the sensations of a board game into a video game is no easy task, especially when said game is a particularly generous RPG in terms of content, rules and mechanics. However, this is the challenge that Flaming Fowl Studios, supported by Asmodee Digital, tried to take up by focusing on the video game adaptation of Gloomhaven, and giving us a tactical RPG as close as possible to its model. Deal?

In Gloomhaven, it’s all about money 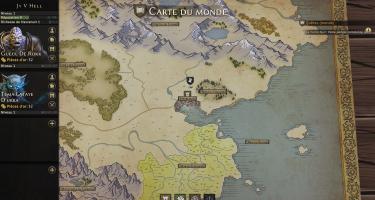 Gloomhaven does things simply and does not bury itself under a pile of complicated narrative frames. The story is therefore easy to remember: there is none. Each character has their own motivations (which you will choose, we will see that below) and for the rest, they are only contracts which come to bring a little mythology to the whole on the occasion of a sentence or two.

We are therefore invited from the start of the game to create a fine team of broken arms by choosing up to 4 mercenaries among the first 6 classes offered. So we end up with, among other things, a nag Golem that acts as a tank and support but whose skills sometimes hit his allies, an agile Thief with a weak defense, a warrior pretty good in defense and attack. You can also opt for a kind of magician playing elements, a Handyman who acts as a support which can also be seen as an engineer class and the Perce Sort, a rat specializing in sneak attacks. Note that it will be possible to get your hands on several other classes, all with their own strengths and weaknesses, but you will have to play a good little while and fulfill a whole bunch of conditions before having access to them, and that, I tell you let find out. 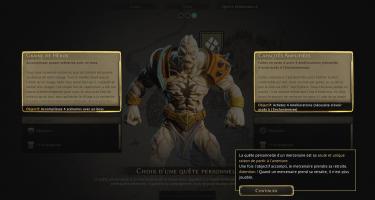 If it is impossible to customize his mercenaries, in addition to putting skins on them, the creation of our heroes also involves validating their reason for living. A personal quest, specific to each, that must be accomplished so that the latter can retire peacefully (and this is also one of the ways to get your hands on new classes to recruit). Generally, it’s about killing specific enemies during your career, or going to loot a specific place. Other objectives will also ask you to watch your allies pass away for science or to steal a certain number of resources. In short, if our team works as a group to make the task easier, we must keep in mind that each character must follow their own path., which could potentially complicate your choice of actions during the many events that punctuate your route.

Yes, since in a good role-playing game, your adventures are told to you by a game master, here a voice-over who plays his role perfectly. So you follow his story, which leads you from contract to contract, in search of gold and glory. The opportunity for you to meet many characters in the sticky alleys of the big city. We note for example the presence of a merchant offering a large number of items (helmets, armor, weapons, potions, etc.) to help you during dungeons, or even a priest who can offer you blessings (bonuses affecting your actions or your equipment) for service.

It will also be possible to come face to face with NPCs who will often ask you for a hand or who will on the contrary try to harm you.. Encounters that often end with choices to be made and not to be taken lightly since these systematically impact your exploits by making you earn bonuses or on the contrary, by hindering your travels with penalties. But that’s fate that will choose since nothing will help guide you on the right path. It’s a bit haphazard, and it’s also here that Gloomhaven gets frustrating. 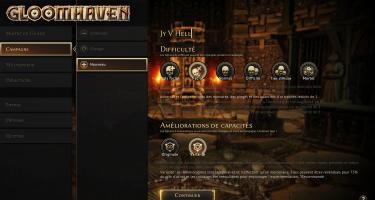 RNG, as it’s known in the field, is ubiquitous in Gloomhaven, whether in “exploration” or in combat.. The consequence of your choices during narrative events is sometimes hazardous and in combat you can quickly find yourself in a bad position for not much. We know this feature related to luck, it is present in many apps, but in Gloomhaven it adds an additional difficulty, a little too artificial, for a game whose mechanics and challenge are already complicated enough.

Gloomhaven is a demanding AND difficult title, I mark the link here since the gameplay is not the only one to weigh in the balance, since the enemies hurt a lot, even on easy difficulty, and the random events with equally random outcomes complicate everything.

The structure of the software revolves around the rules of the dungeon crawler, so we will have to go on a quest in many areas to explore and loot, all while liquidating the threat lying in the way. Each instance is run on a turn-by-turn basis, on a terrain divided into hexagonal tiles, where each of our actions has a cost. The simple act of walking, or picking up an object requires reflection since your resources are limited. Here, no dice rolls or action points, everything is played with cards. 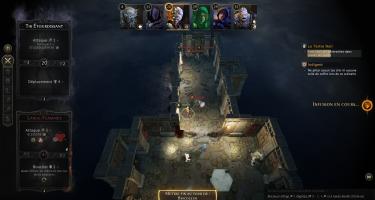 Each mercenary (or class) has its own deck, made up of several dozen cards that serve as action points to move, but also skills to use during or out of combat. Obviously, you’ll only be able to take a handful with you, forcing you to build smart decks based on personal and team synergy. It will then be necessary to take into account very (too?) many parameters that it will be really difficult to list here.

Basically, each card has a higher or lower cost (initiative) which will determine your position in the timeline of events. Next, most of the time, they have two parts: an upper one for attack actions and a lower one for movement actions. Each of these parts also contains skills that can be activated or not (attacks, buffs, healing, special abilities, etc.).

READ :   Konami bets on NFTs and intends to deploy more

During a turn, you must first choose two cards for each of your characters taking into account the fact that you can only use the upper part of one of your cards and the lower part of the second, which forces you to be particularly attentive and strategic in your choices.

Many other things also come into play, such as your used cards ending up burned and unusable or in the discard pile, in which case you can collect them via spells, skills or simply by resting, which nevertheless forces you to burn one in the process. We can also note the presence of magic elements to be charged to activate certain special effects of our skills, the possibility of altering our attacks with our equipment or of taking damage in several different ways. (with our HP, our equipment or by sacrificing cards).

Really very difficult for a lot of reasons

It’s not for everyone 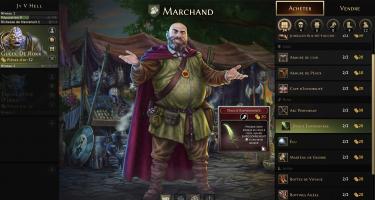 I’m not going to dwell on the subject any longer or distil all the subtleties (those that I understood anyway) on pain of losing everyone, myself included. Just know that Gloomhaven takes a long time to tame. The gameplay is ultra complete, precise, and offers enormous strategic possibilities that only experience, patience and your own thinking will be able to make you benefit from.

The thing, is that the game is not really accessible and will still require a lot of investment to see the end of it, especially when you know that the campaign has no less than 95 missions, that the Guild Master mode generates more than a hundred and that it is also possible to play in cooperation with friends.

However, Flaming Fowl Studios still tries to attract newcomers by offering a wide range of difficulties ranging from very easy to very very difficult. But also by offering the possibility of modifying certain rules to make them a little more flexible, such as removing penalties, or facilitating certain actions. Despite everything, the challenge remains particularly high and the game is not easy to understand. However, once the basics are mastered, we begin to seriously enjoy ourselves.

Finally, visually the software comes out of it without damage and even turns out to be rather pretty although minimalist. The environments are varied and the bestiary particularly extensive. We will also note a very clean sound design that sets the mood well, discreet but effective music and very good English dubbing. Also note that the texts are fully translated into French, with a few hiccups.