By looking at the search volumes of several games often cited in the video game press, one site has tried to establish a top of highly anticipated titles. The next God of War would be in the lead.

If it is difficult to have a real vision of waiting for video gamessince no service can quantify this globally (Steam’s wishlists only concern the PC for example), we can always trust the Google tool to have an overall trend.

Thus, a site survey Time2Play compiled a list of most anticipated video games of 2022, based on the volume of monthly searches through search engines, using an SEO tool. And we see a very popular top 5the first of which, God of War Ragnarok, would be in broad head. 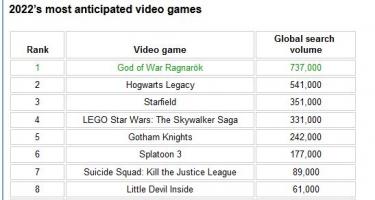 Behind, few surprises, since we find Hogwarts Legacythe adventure game in the Harry Potter universe which will undoubtedly attract a large community of fans, but also the very ambitious game in Starfield space, or even others popular licenses like LEGO Star Wars: The Skywalker Saga (of which you can find our exclusive gameplay preview) and Gotham Knights.

READ :   Charts France S2: the Switch still on top, but a PS4 game back

Perhaps more surprisingly, we find Splatoon 3, Little Devil Inside and Redfall in this top 10. The study recalls that the ranking was established after the official presentation of the Harry Potter game gameplay on the occasion of the recent State of Playcausing saved searches to take off.

Obviously, this list is to be taken with tweezers, the quantification of this data being very delicate, and the methodology based on a pre-selection of the most anticipated titles via several press articles. On the side of VGR members, who can put games on a waiting list via the profile, Dead Island 2 is the most anticipated game. Must say that since 2014, there is something to be impatient…

And you, what is your most anticipated game of 2022?