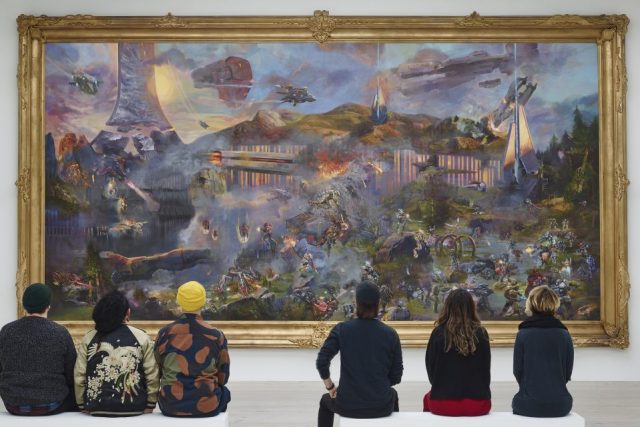 An oil painting of Halo Infinite finds its place alongside the Mona Lisa, the Venus de Milo and the coronation of Napoleon.

If you are in Paris this week, you will be able to modify your program. To celebrate the release of Halo Infinite on Xbox and PC, an oil painting named Master Piece is presented at Carrousel du Louvre in Paris, from Saturday 11 to Sunday 19 December.

The artist who brought this painting to life is called Iva Troj and worked with 343 Industries, one of the studios dedicated to the development of the game, for the design of the work. It all started with sketches and rushes in pencils, then once the final design was validated, she could start painting with her team.

This canvas represents the Master Chief confronting his enemies in a battle oozing heroism. The work at Louvre carousel is a replica of the original which is exhibited at the Saatchi Gallery, London.

Iva Troj has found success all around the world, tells us more:

This painting expresses my love for the Halo universe and its storytelling, I knew what it could mean to fans of the series. I wanted everything to be perfect, from the colors to the characters, I had to redraw Master Chief about fifty times, but also for the work to tell a story. I hope those who see it will feel that it was designed with love and respect for the world of Halo, it was an amazing experience for me.

The canvas is divided into three parts which each contain four different layers of material. The team started by defining shapes, contours and colors on the canvas with pastel and charcoal in order to have a general idea of ​​the location of each element.

READ :   Keanu Reeves will be the next Batman in the cinema

After a coat of varnish, the canvas was washed with water, before the acrylic paint is applied. Details have finally been added with different oil paintings, which has the particularity of drying more quickly, before the whole is varnished again.

The canvas was so big that I couldn’t keep it in my studio in Brighton. Someone gave me an address in the center of Brighton, it was an arcade near a church and an old theater. We built a box to work on it, but we had to keep it a secret and when we talked about painting we used a code. This project was close to the hearts of the team members, who would often talk about their memories of Halo on Xbox. They put their hearts to work and it brought us all together, everyone worked hard to make the project a success

See you at Carrousel du Louvre before December 19 to discover this masterful work. As a reminder, Halo Infinite is available in Xbox Game Pass, Xbox Series X | S, Xbox One, Windows PC, and Steam.

It was a great experience. People had tears in their eyes when they first saw the painting in the gallery. It’s hard to find a good team to work on, I want this group to stay together so that we can work together on other projects.