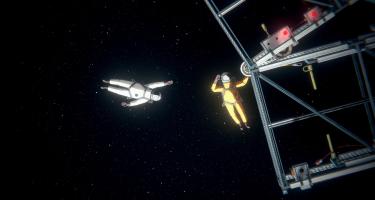 This test is for all those who have one day dreamed of becoming cosmonauts, but who ultimately did not want to eat vacuum-packed food and defecate in space toilets. Heavenly Bodies allows you to live this dream sitting in the back of your sofa, far from the void and the interstellar cold.

Indeed, 2pt Interactive’s proposal puts you in the shoes of one or two astronauts – because yes, the game can be played in local or online co-op – whose mission will be to restore the compartments of a ship that is falling to pieces, the goal being to return home safe and sound. You will evolve in 2D decors with minimalist architecture easily evoking a spatial complex. The elements of the ship are carefully detailed and the whole is accompanied by a discreet sound design, leaving room for a little melody and some ambient sounds reinforcing the feeling of loneliness.

Once the framework is set, it’s time to look at the game mechanics. Indeed, to interact and achieve your objectives, you will have total control over your character, each member benefiting from a dedicated key – the joysticks for the arms, the triggers for bending the legs and gripping objects, as well as a key for swiveling the camera angle.

A plurality of keys for a little man who will give this amusing feeling of handling a completely disarticulated puppet, wandering like an octopus – for those who have the ref’ – in an environment that seems hostile. The gameplay here is the most difficult element to master. It will take patience to tame it and get to the end of this adventure. The level of difficulty you have selected – Assisted, Classic, Newtonian – or your degree of perseverance in the face of pain will have a strong influence on your game.

The gameplay here is the most difficult element to master. It will take patience to tame it and get to the end of this adventure. 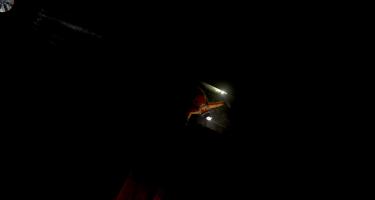 Yours truly has chosen the intermediate difficulty mode, to complete the adventure in 4h30 at the cost of some cramps and joint pain. If the “classic” mode displays a good compromise between simulation, management of weightlessness and accessibility, mastering your character’s movements is sometimes like a real obstacle course. Nothing to do however with the Newtonian difficulty mode which scrupulously respects the laws of gravity. It is therefore impossible to hope to “swim” to move forward… Only your basic impulse determines your trajectory, each imprinted movement or each object struck will cause you to capsize irreparably. It will therefore be necessary to operate in a prudent and delicate manner.

READ :   Test of Anuchard - A shy stroll within a fallen kingdom @VGR 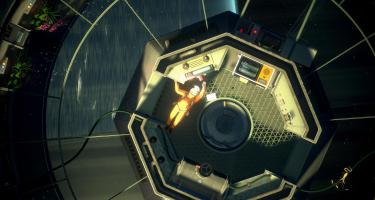 The task becomes all the more difficult with your character who constantly loses focus. Understand that the camera does not follow your character’s rotations. This has the effect of forcing you to refocus with the dedicated key so as not to have to make gestures in mirror mode. However, rest assured, you get used to it after a certain amount of practice and it even becomes pleasant to survey the mazes of the ship in Thomas Pesquet or Bruce Willis mode – it depends. Note also that the developers have integrated the features of the DualSense, and that your movements and actions are accompanied by haptic feedback and adaptive triggers.

Everything is renewed enough not to feel tired. 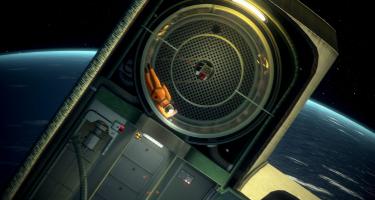 In its structure, Heavenly Bodies consists of missions – 7 in total –, and each of them takes advantage of the gameplay to make you discover new situations or small puzzles. Nothing sensational that said, since the objectives are quite similar: bring an object to a specific place, plug in an outlet, activate a switch. You can even pilot a ship to drill for important minerals for the rest of your missions, and everything is renewed enough not to feel tired. Moreover, the missions are all carefully explained during a small briefing in black and white, very 60s in spirit. What’s more, you can count on a small notepad that can be consulted via the touchpad to see the map and the key elements to activate, or even the optional challenges to succeed.

Two is much better!

Of course, spacewalks will also be part of it, and it will be recommended to harness yourself if you do not want to capsize in the interstellar void as our editor-in-chief paid for it during a surprise airlock opening.

Because yes, Heavenly Bodies takes on a much friendlier dimension for two. In itself, the adventure does not change, the objectives and missions are the same. But, it’s much more fun to browse: we can divide the tasks and help each other to save time or drag our teammate like a ball when he does not seem to understand the challenge of moving in the absence of gravity – true story.

Heavenly Bodies takes on a much friendlier dimension for two. 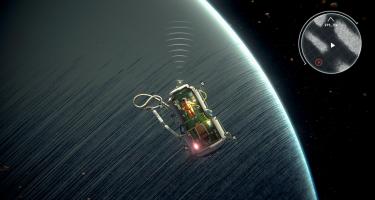 Joking aside, a pair will not be too much if you want to complete the challenges offered, such as completing a mission within a given time or finding certain artifacts. It is even highly recommended to be in pairs to sometimes make your life easier. Handling your ship can be hell on its own, especially when you have to alternate piloting and drilling phases.