When we think of nintendothe names of Mario, Link, Donkey Kong or even Samus Aran instinctively come to mind, that of Kirby only arrives in a second timealthough it is also one of the essential characters of the Japanese brand. This little pink ball that swallows everything in its path comes back in a new adventure for the thirty years of its creation with the release of Kirby and the Forgotten World. Officially announced at Nintendo Direct 2021the platformer was eagerly awaited by many fans and by yours truly. Let’s see together what this promising new album has in store. 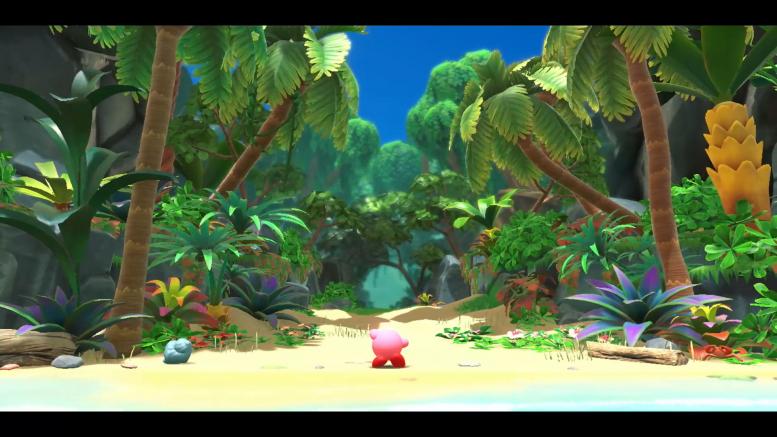 Kirby and the Forgotten World is the 19th installment in the main series., or the 35th if we count all derivative games. He succeeds Kirby Star Alliesreleased in 2018. However, it is still developed by Hal Laboratorythe studio that made born the license in 1992.

We therefore embody Kirby who finds himself embedded in a post-apocalyptic universe, went to the rescue of the Waddle Dees captured with a vengeance without anyone knowing the reason. We will also meetElfilin, a cute little creature who will help us in our quest to save the world. Like some games nintendo Of this genre, the scenario is not of primary importance. In fact, it is more abouta pretext to plunge us back into the marvelous adventures of this gluttonous little ball. However, if the plot seems quite simple to us, the end is no less epic, gripping and followed by an end game which extends our epic a little.

The goal of our adventure will therefore be to free all the Waddle Dees who will then rebuild our village. This place will allow us to rest to recover our health, improve the abilities of our imitation skillssuch as the hammer and the sword for example, as well as to play many little games. Among the latter we can, among other things, participate in a fishing contest or arena fights. As these little creatures are freed, our hamlet will grow and unlock new possibilities for purchasing items such as healing, attack or defense potions, but also other mini-games. 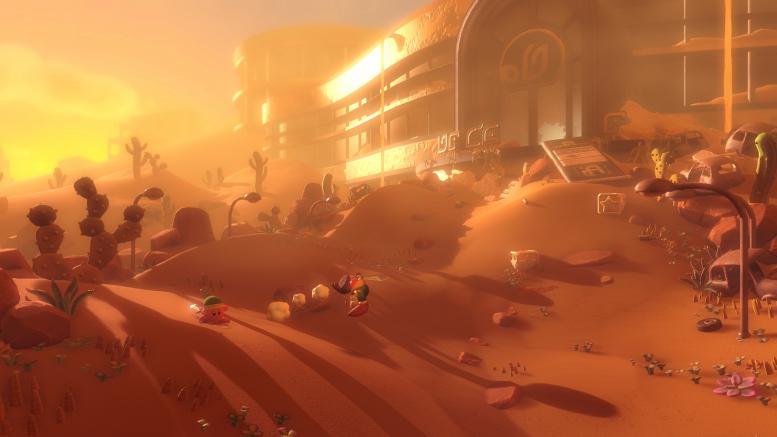 But if Kirby was so expected, it is in particular for its all-3D world, a first for the saga. Although I have nothing against 2D, on the contrary. This episode immerses us in 6 absolutely beautiful worlds, with customary levels taking place in the desert, or volcanic lands. However, and for the first time, it appears a particularly successful imitation of London under the snow. Their designs highlight theexploration, discovery and reward players who will tread every corner in order to complete optional challenges and recover all sortes of collectibles like figurines, or blueprints to improve their skills.

READ :   After The Witcher, Henry Cavill is interested in another game adaptation

In addition, all levels have mini quests, such as eating 4 donuts or finishing a boss fight in less than two minutes, as well as hidden secrets that allow us to complete each of them 100%.

The end of the world aspect is highlighted by the lush vegetation that reasserts itself in the first levels, or by climatic hazards such as snow or sand in the following ones. The artistic direction employed makes this rich and coherent post-apocalyptic universe. A real attention to detail has been brought to reinforce the feeling of immersion with the ruined buildings and everyday objects left as they are.

While at first we thought this new game Kirby would approach a super mario odyssey by its “open world” aspect, it finally resembles a Super Mario 3D World with its platforming gameplay, its verticality and its fairly commanding and size-limited levels. 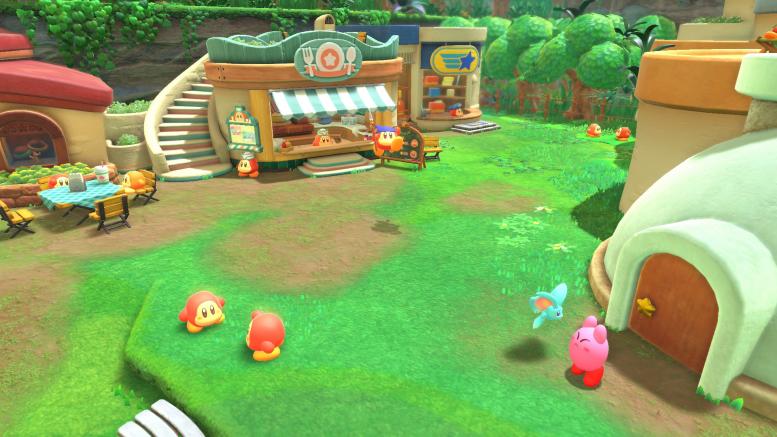 The transition to 3D has made it possible to bring more freedom, whether in terms of explorationeven if it remains confined to finding a few secret passages or going around a place, but also in terms of gameplay, especially during boss fights or platform phases. During a level in an amusement park taking place in the dark, we must transform ourselves into a giant light bulb in order to illuminate the area and move while crossing the obstacles present in the surroundings.

The fact remains that its integration inevitably generates some small problems. Among these inconveniences, we find that of the camera that is not always positioned correctly. It spoils certain passages by its positioning either too close or too far, not facilitating our movements. As for these, Kirby’s build makes the character quite slow, and will frustrate us a little when we want to move forward quickly, or during timed levels. We can also note some aliasing issuesbut which will never be as awful as those of Pokemon Legends Arceus. Rest assured, however, these small defects only slightly interferes with the gameplay or the beauty of the cute and abundant universe offered.

When the appetite goes, everything goes 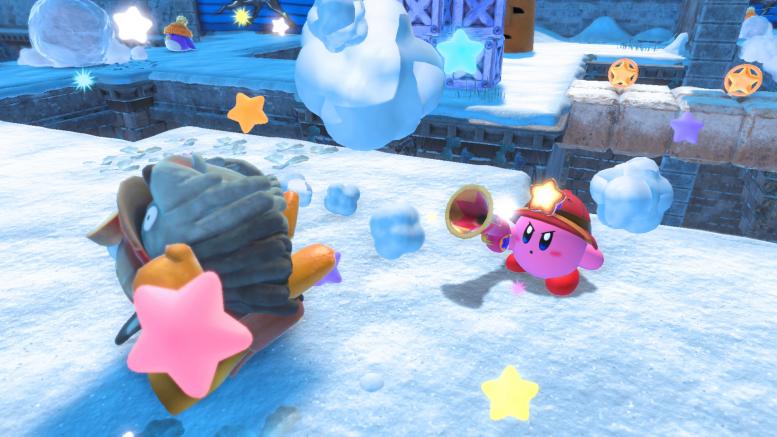 Kirby is also known it is for its unparalleled cravings. As usual, we have the possibility of swallowing everything that is in our path, objects like enemies, thus obtaining new abilities. Of course, we find the usual imitation skills, like the mastery of fire, ice or sword for example. Besides, two new ones make their appearance, the drill and the explorer. In total, 12 skills are to be discovered but also to be improved. Along our adventures, we will find plans that will make the most of our capabilities, increasing the attack speed or the damage inflicted. To modify them, we will have to collect rare gems that we will win during the treasure road challenges and bonus levels scattered throughout the different maps.

And that’s not counting the Kirby’s transforming ability that can change into a car or a can dispenser, for example, to add an extra touch of fun. This capability also guarantees a change in gameplay by the use of these imposing objects which can unlock secret passages or help us defeat tough opponents. At times, they will even become part of the level, such as during a car race or a glider getaway.

The software offers us the possibility to play two in story mode. If one of the players will play the eponymous character, the second will take on the role of a Bandana Waddle Dee who unfortunately cannot swallow opponents or transform, thus limiting his role. The other predominant disadvantage of this two-player gameplay is that you won’t have to move too far from your partner so as not to disappear and repop close to him. 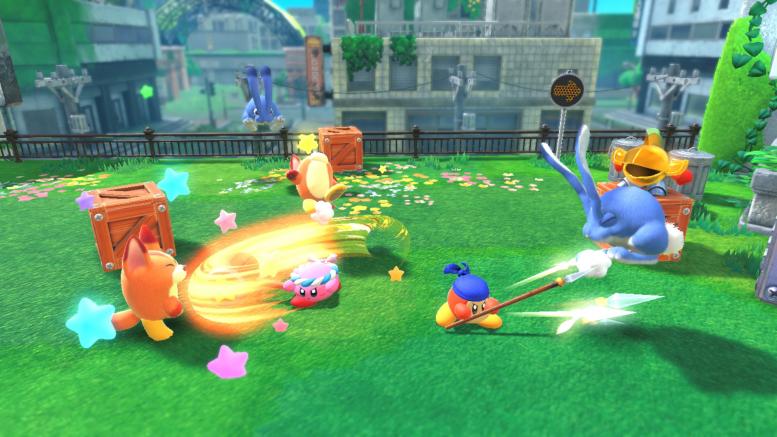 This Kirby wants to be accessible and allows from the beginning of the game, to choose two levels of difficulty. One, called Breeze Mode, is meant to be the easiest with a large health bar, while the other, called Hurricane Mode, is more challenging and knows how to reward you with more coins. Anyway, the opus does not set the difficulty bar very high, even if the end and the end game levels are more complex. To finish the main adventure, it will take about ten hours, if you take your time. And if you plan to finish it 100%, you can easily double your playing time.

One of the points that I would also like to highlight is soundtrack quality. Composed by Yuuta Ogasawara, Hirokazu Ando, ​​Jun Ishikawa and Yuki Shimookait has many themes that perfectly complement the worlds we roam. It’s a real treat and certain leitmotifs will keep us in mind.