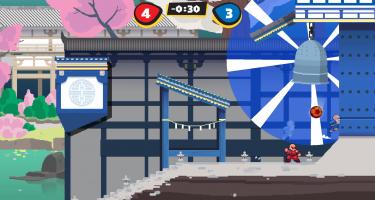 Small independent creation by WhaleFood Games and Blowfish StudiosKungFu Kickball is sure to remind you of a cinematographic work that combined martial arts and football. The software indeed takes up the idea, all things considered of course, to adapt it to a video game.

KungFu Kickball therefore takes the form of a 2D fighting game with old school graphics and music theme in 8-bit style, playable with 2 or even 4 simultaneously, locally or online. A noble choice that recalls our good memories when games still rhymed with conviviality. 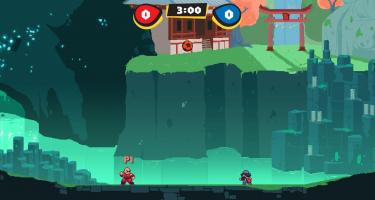 The principle itself is very simple: a playground strewn with obstacles with, at each end, a bell which acts as a “cage”. You will therefore have easily understood that your objective will be to cross the field to score more goals than your opponent, and all shots are of course allowed. Because if you can hit the ball in several ways to achieve your goals, you can also go after your opponent who didn’t ask for that much.

Moreover, the software contains an unsuspected strategic dimension which will require some practice to fully understand the possibilities offered. Indeed, in addition to having to tame your character’s “floating” and wayward maneuverabilityyou also have to master the different combos available to you. 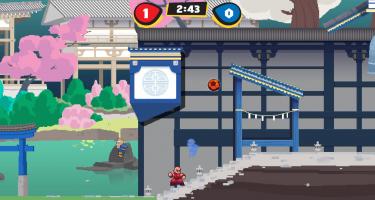 Don’t worry, nothing very complicated since KungFu Kickball is adorned with the bare necessities. To know a jump key – which sends your character higher or lower depending on the pressure time -, a action button to combine with directions to give an effect to your ball – bell shot, straight or high -, and the dash. Each character also benefits from a special attack that you have to charge to hope to gain a certain advantage over your opponent.

It is therefore a question of playing with all these possibilities, taking into account the topography of the land to take advantage of obstacles and bounces. Each playground (6 in total) has its own specificities and a dedicated musical theme (cave, volcano, desert). Some are steep, others have weather conditions like wind that temporarily alter the trajectory of your jumps. And casually, all this combined completes a gameplay that may seem basic at first sight but which in the end is full of possibilities, as long as you have the patience to practice your skill. But the game is worth it, as the action quickly becomes frenetic, the ball passing from one camp to another at full speed, brushing the bell and then ringing the opposing side. Yes, it’s nice and it’s funny to see all these little characters (8 with different abilities) floating and fighting like Super-Sayans (one of them looks very much like Krillin).

Locally, it’s not panard and multi… 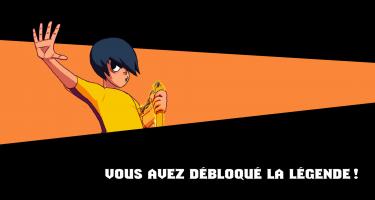 KungFu Kickball offers a nice range of fairly substantial game modes such as the tutorial to get your hands dirty, arcade mode which asks you to beat bots and pass levels one by one to unlock new characters… There are three difficulty modes to vary the challenge, these mainly influence the debility of your opponents (hits in the void), the science of placement and the ability to counter your strikes like a Shaolin monk.

READ :   Gameloft opens an 18th studio in Paris, with free-to-play in the sights

A versus mode offers to play in 1 vs 1 or 2 vs 2 with friends and finally there is also a tournament mode playable up to 16 players.

But where we expected the soft, it was especially on its online mode. And what could be worse for a game to be amputated by half of the proposed content? Not that he is absent, the problem is that he is completely deserted. To be quite frank, we could only try two games in 1vs1 on a fairly large number of attempts to access it, so there is no need to specify the result for the 2 vs 2 mode…

What could be worse for a game to be amputated by half of the proposed content? 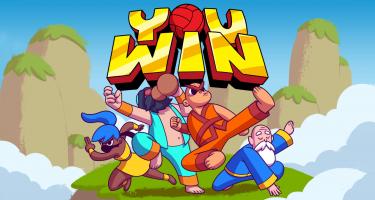 It was therefore not uncommon to poiroter ten minutes in training mode without a bell while waiting in vain for the arrival of an opponent. And it’s a shame because the concept is really fun with a real game partner, and much more challenging than against a bot. So imagine that if you don’t have a mate at home to keep you company, you’ll probably be stuck in single player mode.

And fortunately that custom game mode is here. This, as its name suggests, offers the possibility of modifying a whole bunch of parameters to give a little spice to your game: playing time, gravity effect, 2-point shot, ball color, friendly damage. In short, a multitude of choices which allows you to vary the experience but which do not forget that all this is ultimately very poor.