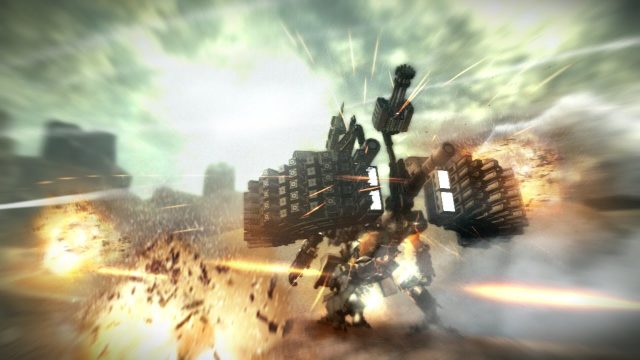 FromSoftware, which will soon release its Elden Ring, is facing a probable leak of another big file: a sequel to the Armored Core franchise.

Geez, FromSoftware might be having some plumbing issues. While a potential non-final build of Elden Ring is found in nature, it is now a Armored Core 6 supposed that ended up on the Internet. According to ResetEra forum member Red Liquorice, a survey has been sent to players by the publisher, with gameplay against bosses.

I just completed a consumer survey on a new Armored Core game with description, screenshots and two 30-second gameplay videos – the first a boss fight and the second a gameplay closer to the world, a snow area.

Supporting photo (because he could not save the video), the leaker explains that a new mecha shooter is in production and reveals a description he received, giving the key points of the new game. We discover in particular that Hidetaka Miyazaki created the world of SF in which the story takes place. Players will be on the planet Bashtar, a world devastated by a cataclysm.

The game (which was teased in 2016) will offer combat with weapons but also melee, while the map would be big enough to allow robots to move freely. Finally, they will be very customizable, giving the possibility to reconfigure elements of the machine and to change its style of play.

Melange, an unknown substance that could dramatically advance human society. In the past, this substance caused a cosmic catastrophe on planet Bashtar that engulfed the surrounding star systems, and eventually its very existence was lost. Decades later, the Melange reaction was confirmed again on planet Bashtar. In search of the unknown substance that should have been lost, various speculations begin to swirl. Various parties are getting involved; The government, corporations, cultists, and unknown mercenaries… The protagonist is one of them.

The game is a TPS (third-person shooter) mecha action title that lets you move around an overwhelmingly scaled map that represents a unique sci-fi world with dynamic mech action. You will face strong enemies and fierce battles both long and short range using guns and blades.

The user has also given some additional impressions of the game, specifying that the boss fights are reminiscent of the Souls series in nervousness and style. As for the title itself: “The survey offered a choice of titles for the game, so I guess it hasn’t been decided yet. Most of them were Armored Core: [quelque chose], including just “Armored Core”, but also Armored Core 6, Armored Core VI, and other subtitles that I don’t remember – some of the choices didn’t include Armored Core in the name at all ”.

READ :   The Artful Escape is coming to PS5, PS4 and Switch

We can bet that if all this information is real, FromSoftware wants to wait for the final launch of its biggest Elden Ring project, to make official communications on the continuation of its activities.

What do you think of these revelations? Are you expecting a sequel to Armored Core? Who wins between an oliphant and a mecha?