The long-awaited free-to-play MMO barely opened its doors when a crowd of players rushed in, taking the servers with them.

To say that Lost Ark was expected is an understatement, for some this name means nothing to them, but for many it is a “Revolutionary” MMO that they have been waiting for for too many years. And as for New World, the servers are struggling to keep up.

So far affordable only not the hallowed path of the founder pack, Lost Ark has opened its servers to as many people as possible by officially launching free-to-play. The problem is that between those who were eagerly awaiting the game and those who got hyped up by the huge promotional campaign of a large chunk of streamers on Twitch, the game did not withstand the overload.

Servers eventually went down for a while before finally reopening, but then again, very long queues are present on most servers. The developers have also announced new measures to resolve the situation, such as the creation of new servers and the increase in the character limit.

Unfortunately, due to deployment issues, launch is delayed. We hope to have this resolved in a matter of hours.

Your patience is appreciated and we’ll update you soon.— Lost Ark (@playlostark) February 11, 2022

At the time of writing these lines, Lost Ark hosts over 800,000 concurrent players and peaked at almost 1 million users. It is currently the 2nd most played game on Steam. 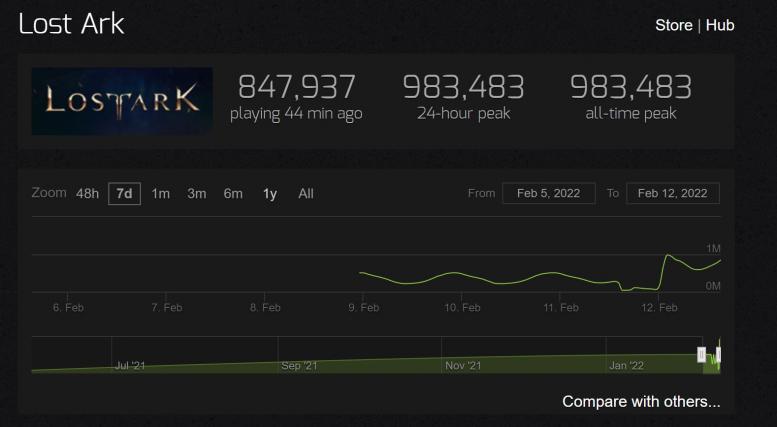