An English store revealed the release date of LEGO Star Wars The Skywalker Saga on its networks, before deleting its message. In the process, Warner confirmed the arrival of the game in April.

Update 3:30 p.m.: It’s now official, Warner Bros has just confirmed the game’s release date: it will be the next April 5, on Xbox Series X|S, Xbox One, PlayStation 5, PlayStation 4, Nintendo Switch and PC. A new trailer for this compilation featuring the 9 films of the saga is unveiled:

For now, the new brick game in the Star Wars universe is set for “Spring 2022”. Highly anticipated by both fans of the film franchise and fans of LEGO, it could arrive on next April 5, according to the message posted by the British gaming store GAME.

On the brand’s networks, a post showing the Deluxe Edition, with a pre-order link to get a carbonite steelbook and exclusive content, was posted, before being quickly taken down. Recently, Warner Bros confirmed the release in 2022 of his game without giving more details. Now, it is very likely that the date of LEGO Star Wars Skywalker Saga will be revealed soon. 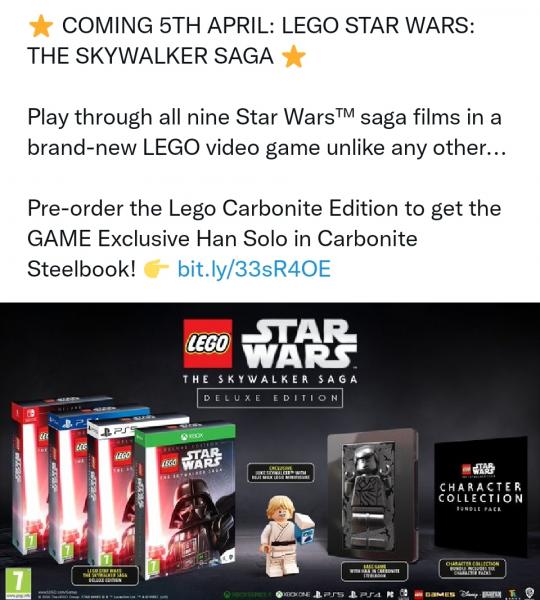