What better than the school scene to simulate, on a small scale, the laws and rules that govern our great and beautiful society? monark uses this universe to depict these evils resulting from human company, to show the harmful effects which can arise from an excess of pressure. And in its way of dealing with the subject, the title employs a means similar to Persona 5. Similar, yes, but still different: the player is no longer sent to face the unconscious, but now has to deal with the frustration and complexity of desires. Interesting subjects, but they still have to be well treated. Is that the case? We will see it.

But, above all, the first question that will guide us throughout our development will be the following: monark does it provide a pleasant experience?

The school and the other world 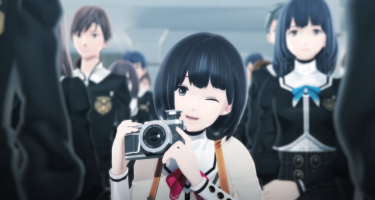 After a disastrous short battle in another dimension which will be discussed later, the protagonist of this story wakes up on the floor of one of the many buildings that make up the school grounds. Shin Mikado. Who is he? We ignore him and himself as well. Amnesic, he forgot everything about him. Even his name has evaporated. Which is an excellent excuse to give free rein to your imagination and name it according to your inspiration. In short, he wakes up and immediately sets himself the task of removing the unhealthy fog that has taken place within the establishment. The students in contact with him are invaded by madness. They wander aimlessly, gabbling endlessly. But they’re not violent, just a little weird. Well, usually… Everything changes when a certain phone call comes in. A call coming from a very special place, parallel to reality: the other world. That’s where the whole problem comes from. And this is where you will go regularly to find a more or less normal situation within the school.

Individuals with oversized egos and possessors of certain powers, the “Pactbearers”, have taken refuge there and operate from this place to have a grip on the real world. Their goal is to bend this one to their vision. Moreover, each visit to the underworld will have as its objective the destruction of their “ideal”, that is, the materialization of their will. To access it, you will have to go through each floor of each building until you find the object that will trigger a call which, once picked up, will take you to your destination. And then you know what you have to do.

But all “Pactbearers” will not be enemies. Among those you meet, there will also be allies ready to help you, for reasons that belong to them. Besides, you yourself are one, although somewhat different. Indeed, as you will be told, you are an anomaly.

If all others have contracts with entities responding to the name of monark, your character too. Except yours isn’t affiliated with a true deadly sin. Your Monark, a kind of sinister stuffed rabbit, goes by the name of Vanitas – the embodiment of vanity. It will give you the necessary strength to face the obstacles that await you and will inform you about the different situations.

Run, run and run again within the establishment 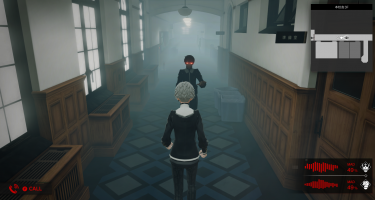 Most of the time, except for the fights, Monark offers fairly flat sequences. This essentially varies between phases of dialogues – in English or Japanese with English subtitles only – and what amounts to exploration.

READ :   Paris Fan Festival: pop culture and gaming on May 7 and 8

The conversations make it possible to introduce themes specific to adolescence. But not only. If the population encountered during the game is mainly composed of students, the place given to adults is not negligible. In fact, with this title, the writers seem to have been particularly sensitive to human nature. Especially since the subject, oriented around the 7 deadly sins, emphasizes the motivations that govern all behavior. And the conclusion is quite simple and cliché. In each malevolent action hides in reality a much deeper reason, born of a certain malaise. The birth of desires, or rather their exacerbation, is therefore only the result of a determinism.

All the confrontations which oppose our heroes to the antagonists then take on a certain symbolism. The former, though possessors of powers granted by their ego, did not give in to their selfishness. On the contrary, their moral faculty is still very much present. They are the complete opposite of their adversaries who, unable to bear the ambient pressure, have taken refuge in their selfishness. It is therefore an opposition of visions and ideals.

As long as we are interested in the subject, there is enough to arouse interest. However, it is necessary not to expect much. The treatment is quite naive and above all not original for a penny. It’s that if you’re familiar with this whole universe that’s been discussed many times, in Japanese animation or shonen-type manga, everything Monark offers will seem reheated. But what is unpleasant about the dialogues is not their predominance – which, it seems, is quite appropriate in these kinds of games – but their arrangement. An example: when a verbal exchange has just ended, you hope to be able to continue your walk quietly, but a discussion arises, after having only taken a few steps. And that seems totally useless since, often, the characters and the subject at the center of the conversations are absolutely the same.

Overall, Monark follows the same pattern. You will run through each floor, enter each room, reach the roof and defeat the enemy “Pact Bearer”. In doing so, a zone frees itself. And another is to pacify. So, you will have to wander around the campus (with a new partner) and reach a new building. The same path, from a classroom where you will come back again and again, will then have to be repeated. Which is quite repetitive.

One thing is certain: technically, Monark is not a thunderbolt. The decors are minimalist, drab and extremely empty. Something that is especially true for outdoor environments. Inside the buildings, it’s a little livelier. But don’t expect a mad move. It’s just a few students sitting here and there in corners. ITalking to them won’t seem necessary at first glance, but in truth, if you don’t, you risk falling into a dead end very quickly. Some clues lie in their words (as well as in certain documents placed on your way). In addition, by approaching them, some of your comrades will make you pass “psychology tests”. It boils down to a few questions with the goal of developing your ego. The progression will not be completely free. Mean by this, that you will not be able to pass an area – however close it may be – without hitting an invisible wall and thus pressing a button on your controller to undergo a loading screen. And then, the other defect of these small phases of exploration resides in the movements themselves. Generally fluid, they become somewhat jerky outdoors.

It’s unclear what about other media – though the differences shouldn’t be wide – but, on Nintendo Switch, these flaws are particularly troublesome. If the performances are quite honorable on dock, this is not the case in portable mode where all the flaws, including aliasing, are revealed.

The finest strategists will survive, the others… 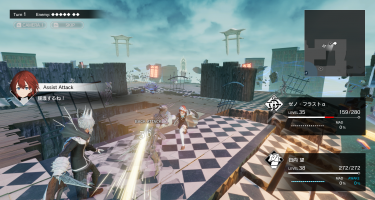 The battles (turn-based) are really something. Obeying the principle of RPG-tactics, they will be particularly difficult. It is not recommended to rush headlong into your enemies. Each step, each action must be carefully thought out at the risk of taking a hell of a lot when they attack in turn. It is therefore important to place your unit, made up of allies and familiars, in order to take full advantage of them and take advantage of their support.. This will multiply the damage inflicted on the enemy. However, as you progress in the adventure, placement is no longer a guarantee of success. The level of your opponents will be increasingly important.

And so, to deal with this ever-increasing difficulty, an improvement system will either allow you to acquire new skills and attacks, or to perfect them. For this, a currency of exchange is made available to you: the “Spirits”. They will be found in the establishment itself, and won during your confrontations. Hence the need to redo the previous battles. With the character’s mobile phone, it will indeed be possible to replay less complicated previous clashes in order to earn enough to level up.

Temperance should also guide your actions. Some attacks consume life points, others give you “Mad” points. And by dint of accumulating, the situation can become very unfortunate. Your character gives in to madness, attacks his allies and ends up self-destructing. If this happens to the protagonist, all you have to do is start the whole process over again. By the way, these Mad points are also to be taken into account when venturing into the fog. Once your gauge is full, you lose consciousness and must resume from the infirmary. A place that you will see many times, especially to take possession of a very useful object: a “mental stabilizer” which will reduce the damage done to your mind and thus delay your loss.

Dagger blows in the case of our hero, spear blows for others or even firearm blows, the arsenal offered by Monark is quite varied. Typically, mundane assaults don’t have any special heals. Special attacks benefit from cutscenes.

Let’s conclude with a point that will perhaps be a detail for you, but not for everyone and certainly not for you: the music. Not the one present during your wanderings through the Shin Mikado Academy, which is nice enough but not varied enough. No, when we talk about music, we think above all of the songs that punctuate the boss fights (against the Pactbearer). It’s neither more nor less than J-Pop, which makes (at least for a while) the games enjoyable – even if they go on a loop. But the difficulty and your fear of seeing yourself annihilated on the next move will quickly take over..