Four years have already passed since Quill, the little white mouse from Moss, came to enchant us in a superb tale in virtual reality. An action-adventure game, with puzzles, which had admirably highlighted this technology and the sensations it can provide. After a few years of work on a sequel, Polyarc brings us Moss: Book II on PS VR. Were we as transported as by the first episode? Did the mountain give birth to a mouse or vice versa? Our verdict. 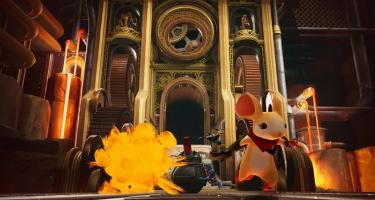 After slaying the dragon Sarrfog in a damn epic streak, now our little mouse Quill is in trouble again, chased by a winged tyrant. Our rodent will then have to make sure not to get chewed up, which is already not bad, but also to reclaim the “five Relics”, while overcoming the Arcans who want to get their hands on it to destroy the world. A vast program of domination and destruction. Moss: Book 2 therefore begins where the previous part left us abruptly., in front of Sarrfog’s carcass. We then take our courage on both legs to find and save our uncle Argus, and embrace our destiny as Wonder Mouse.

This suite impresses with its stunning set of scales

But before that, we, the player, or rather “Reader» as the narrator of the story likes to call us, we must reconnect with the intrepid Quill by slamming a high five. From then on, we felt like we had never left her and once again smiled broadly. Seeing her stretch out one of her tiny front paws to reconnect with us, possibly showing us a path in a rather organic and never forced way or even performing a roll-and-roll while believing herself in an action film (like Gizmo in Gremlins 1 & 2), are so many animations that always make us melt. We love Quill and she loves us.

As in Moss, the scenario is hardly original but can be followed thanks to the care given to the narration, to the overall coating and to the characters, old and new. There is also a nice surprise in the field… Each chunk of gameplay is once again interspersed with a return to a church to turn the pages of books and thus listen carefully to the story told by the female voice-over in VOSTFR or full VF. The voice acting in both cases is still excellent and contributes a lot to the general atmosphere. Although below the VO, the French version still seems as good for those who hesitate. We also savor the music which, like the first, is inseparable from the atmosphere created by the game. 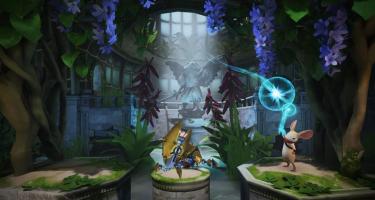 Quill and we, “Reader”, are an inseparable duo. Together we are invincible, together nothing is impossible. Including when it comes to solving puzzles or clearing the way of enemies. If you’ve never played it, here’s how it looks. You control Quill via the left stick and buttons on your controller, and a blue ball with the DualShock 4’s gyroscope. This luminous sphere personifies the “Reader”. It is with it that we can block opponents to prevent them from attacking or force them to go on a switch, heal Quill, move platforms or, new to Moss 2, grow ivy to climb walls or create bridges. And in four years, the little mouse has had time to evolve and strengthen his game.

She’s back with his tiny sword which now allows him to perform a powerful dash to overcome crevasses. But in addition, she has new weapons that we prefer to let you discover… A simple gameplay but more provided for vary the situations experienced and the puzzles encountered (even if there are sometimes repetitions). On this, Polyarc is strong, very strong, and expands the complementarity between Quill and the “Reader”, which will never have made as much sense as in this sequel. We enjoy. So yes, there are hiccups. The inventory, which was not present before, has a cumbersome management. Why did the developers not go with a system on the fly, assigned to the directional cross for example, to exchange weapons? There is also this new enemy that can be transformed into a ball in order to send it to other opponents, like a pinball (which rolls). It’s well thought out and integrated for puzzles, but the handling of the gyroscope – once in a ball – is flawed by its imprecision. To tell the truth, even today, we have not necessarily grasped the principle. But hey, the main thing is that we got to the end, right? 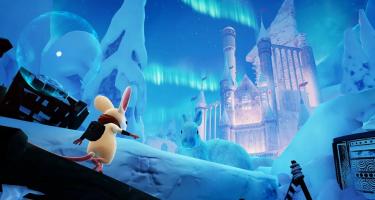 Moss: Book 2 also clearly progresses in the diversity of its sets, in their layout and from an aesthetic point of view.. It is inconceivable to draw in a straight line without taking the time to observe and revel in the work of the developers. First, you would miss passages that contain collectibles like the classic scrolls. Nothing essential, however, except perhaps the multicolored dust. If you stockpile enough of them, you can access rooms and chests that contain alternate outfits for Quill. Second, and most importantly, you have to take advantage of the environments that are to die for. The greenhouse for example gave us a nice slap.

A universe still as enchanting

But where Moss is quite exceptional is in the game of scales of its landscapes, protagonists and bosses. That “Honey, I shrunk the kids” feeling but in XXL format. In VR, this is precisely what amazes the player and makes the difference. The feeling of being more of an “actor” than a “spectator” of the universe, even though we are not in subjective view. In this, Moss 2 is finally close to an Astro Bot Rescue Mission, a nugget of PSVR. But unfortunately, the adventure always comes to a close just as quickly, leaving us with a taste of unfinished business…until the formalization of Moss: Book 3. Maybe.