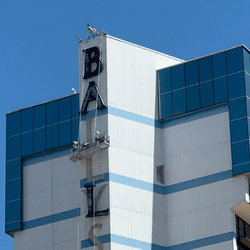 During the month of January, the Caesars Entertainment Group announced through a press release that its hotel-casino Bally’s Las Vegas on the famous Strip was going to be renovated for an amount of several million dollars.

On this occasion, it was also learned that it would change its name to the Horseshoe Las Vegas by the end of this year. On Tuesday, August 23, the letters B, A, L, Y and S were removed from the façade of the gaming establishment that occupies the southeast corner of Las Vegas Boulevard and Flamingo Road.

A complex opened in 1973 as the MGM Grand Hotel & Casino

Bally’s Las Vegas is not the first name of this famous establishment that currently hosts an area of more than 6,200 m² dedicated to gaming. Indeed, at the time of its opening which took place on December 5, 1973, it was called MGM Grand Hotel & Casino.

With more than 2,100 rooms and suites, it was one of the largest hotel complexes in the world.

The only problem was that on November 21, 1980, it suffered a fire that caused 87 deaths and nearly 750 injuries, which would lead to changes in fire codes in Nevada and throughout the United States. After 8 months of work, the gaming complex finally reopened, but attendance dropped sharply due to the bad publicity caused by this tragic event.

This may be why it was sold to pinball and slot machine manufacturer Bally Manufacturing in 1986. That same year, it was also renamed to Bally’s Las Vegas.

It wasn’t until the mid-2000s that the complex changed hands once again. It then became the property of Harrah’s Entertainment, which was later renamed to Caesars Entertainment. It was also at this time that the group acquired the Horseshoe chain.

With the renaming of Bally’s to Horseshoe, this glorious brand will disappear from Las Vegas. Nevertheless, this could be only temporary.

In fact, the year 2020 in the world of American casinos was marked by the historic buyout of Caesars Entertainment by Eldorado Resorts for a sum of $17.3 billion. Subsequently, the group sold the Bally’s brand to Twin River Worldwide Holdings, which took the opportunity to rebrand itself as Bally’s Corporation shortly after.

The latter operator bought the Tropicana from Gaming and Leisure Properties for $308 million this year. Since it has made a habit of renaming some of its gaming complexes as Bally’s, we can expect that brand to reappear on the Strip at some point.