The game has been tested on a version early access after its publication on 12/01/2021. The developers believe that this early version is playable and can be offered to the public. The content does not however reflect the final version of the product, so our rating should be considered as a preview note.

In crisis situations, you can call the Ghostbusters, The All Risks Agency (although, it seems, it’s really the last chance at the last moment) or John Wick. But in real life, it is often the SWAT or the GIGN which intervenes, because the secret private agencies, it costs an arm, and Jack Bauer is retired. In No Plan B, you are the people called in to kill the hostages and save the terrorists, if not the other way around.

Unlike Rainbow Six, SWAT and other Anti-Terror Force, No Plan B proposes to target only the front and not the during. Here you have to really manage the deployment of your elite unit, its organization and its battle plan. In short, all the part before what you’re used to playing in this kind of tactical / infiltration / action title. Because yes, the little independent game of GFX47 is a real mission simulator. In a 3D view from above, with small angular Minecraft-style characters (we’re exaggerating a bit but you get the idea), the game shines with its variety and content. Indeed, if the basic pitch is simple, No Plan B is very complete. Overall, the mission is the same for everyone: you are at the head of one of the 4 entities of the game, namely the SWAT, the FBI or, conversely, the Gangsters or the Thieves, and you must complete your assault within the time limit. Through a large number of individual missions or a campaign mode, your objective will be to fully plan the order of attack in less than 1 to 3 minutes. 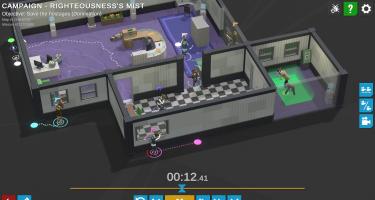 For this, No Plan B simply asks you to manage your time and define precisely all the actions that your characters will have to do. You have 2 to 10 soldiers (or terrorists), depending on the difficulty and type of mission, and several starting positions available (generally near doors or windows, often multiple in order to lead coordinated assaults) . Fill these slots to place your attackers at startup. Then, either by scrolling the action timeline, or by dragging your characters on the ground (thus tracing its route), you will define their entire route: the path they will take, the doors to open or smash with the pump, the grenades to send, the places to target … This chronological bar only lasts a few seconds and scrolls before your eyes during your planning, so you have to be precise and efficient in your movements at all costs to clean the premises and secure the hostages as quickly as possible. Whenever you select a character from your team to send them to the field, obviously you go through some sort of armory which offers you equipment with one of the weapons of the game (sniper, minigun, uzi, handgun, pump, SMG … but also stun grenades, flash or frag for example) and up to three skills to unlock with action points obtained during previous missions that you have completed.

Like a football or basketball team simulation game, it’s up to you to choose your group 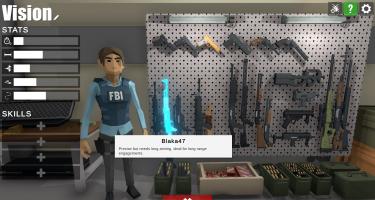 Each character can therefore improve in more than a dozen different ways, such as increasing their speed in the field, having a better view of enemies when entering a room, being immune to flash effects, being able to tank or unlock. the doors faster. These statistics are in addition to his 5 base characteristics defined by the equipment he takes in the armory. As these skills and abilities are associated with your characters, you can actually build your team of experts in several areas (the sniper who has better eyesight, the entry fragger who has better viewing angles, or a more powerful grenade throw. , etc). Be careful, however, in the more punitive campaign mode, each player loses life if they are hit but also gains fatigue. Like a soccer or basketball team simulation game, it’s up to you to select your group so as not to exhaust your resources too quickly and risk losing big statistics in certain skills due to the lack of coffee in the soldier’s thermos .

These concepts are very important in the tactics defined for your team. Indeed, selecting your teammates well and assigning them the right skills can save precious seconds in the assault, it is important to stay within the framework of the timeline that will scroll no matter what. Once your battle plan has been defined, you can therefore switch to the “live” version and check that everything is going as planned (or not). At this point, the game removes your hand and you just have to see. Usually, this is where your team finds out the location of enemies and where you can spot points that you may not have seen before.

Defeat is not an option

At the end of the mission, a count allows you to take stock of your actions and discover the final score which will place you in the world table of the best players. The game then offers you to replay the individual missions as many times as you want, with of course the possibility of redefining a particular point of the strategy. Campaign mode, on the other hand, doesn’t let you redo failed missions, which adds pressure. This mode works fortunately with an evolutionary tree: each objective reached gives you points to unlock the next stages of the tree, two alternative branches for the continuation of the adventure. It is in this part that the very concept of management is added to the simulation, since it will be necessary to pay attention to the fatigue of the person and his inventory. With your points, you can also take advantage of it to regenerate the fatigue, life or ammunition of the whole team. In the event of death on the other hand, the members are replaced by other recruits and you thus lose their weapons and their acquired advantages.

The particular interest of the game is that in addition to the randomization of the enemies on the proposed missions – which makes it possible to never know what one will fall on -, you have a random mission generator and a level editor to design challenges yourself. The title also offers many categories of objectives, ranging from armed assaults to the seizure of goods, through the securing and exfiltration of VIPs or hostages, or even simple exfiltration missions of your own team under enemy fire. Daily, monthly and weekly challenges are also accessible in the game menus, and the community can obviously add more on the servers. Graphically, although being very clean, No Plan B has the advantage of being consistent as a whole. During the planning phase, you play in a sort of training shed with plywood walls and wooden crates, but when you assault you then discover various places like offices, abandoned warehouses or housing. Overall, it can be taken up in hand in just a few minutes, the time to do the many tutorials to learn how to coordinate two attacks (by dissociating, for example, the scroll bar for each character in order to properly manage what they are doing. same time »as the others), avoid being dazzled by his own flash or ask a character to strafe to always keep his aim towards a particular place. In short, an extremely complete game which is only in early access but which already has many qualities that will please all fans of strategy and simulation. 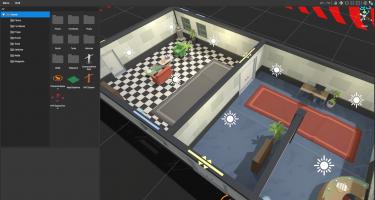