Welcome to the world of bribery and revenge with Okinawa Rush: a very retro 2D title mixing beat’em all and platform. A PS4, PS5, Xbox One, Xbox Series, PC and Switch game on which the developers have bet to give players an experience worthy of arcades and a bygone era. Yes, another attempt to titillate the nostalgia of some. Is it really a necessity to want to rekindle the now very cold ashes? It’s up to you, you alone have the (very subjective) answer to the question. Yes, here, only the present production interests us: is the quality there? Is the tribute successful? Well! difficult to answer all at once. However, what can be said right now is that this app, developed by Sokaikan limited, managed to arouse our interest despite a first grip dominated by doubt, because even if it is certain that the title has its qualities, it nevertheless has certain faults.

The fury at the end of the fists 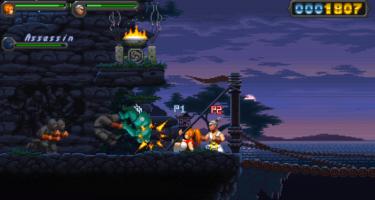 WhenOkinawa Rush starts, two choices are offered: you can start the adventure in arcade mode or story mode. In the first case, it will be necessary to arm yourself with a lot of cold blood, as for the second proposal which is made to you, it is the same, but the annoyance that you will be able to feel will be less since it will indeed be possible for you. to adjust the level of difficulty to your liking. Moreover, in this configuration, in addition to the main campaign, various sub-modes are made available to you through a fairly prosaic interface. They are accessible via the Dojo portal (which can be modified by you through purchasable items, with the rewards collected, from a merchant) in which you can only try your hand at one “Horde mode”, and face enemies wave after wave, play a mini-game but also (and above all) practice. In this way, you will improve the status of your characters (increase in attack points, life, defense …). This will allow you to navigate the game with a little more ease and confidence.

So, it’s up to you to increase (or not) your stats before starting the proposed journey for good, a delicate journey dotted with all kinds of enemies. Because yes, on your road, the adversaries will be in number. What do they want? Who are they? A clan by the name of Black Mantis is looking for a manuscript containing a martial art technique that would allow its lover to rule the world. To get it, the minions sent by the boss of the gang will not cut corners and kill the hero’s beloved – well, one of the heroes of the game: a karate master named Hiro. But that’s not all, besides revenge, he has yet another reason to fight: his children kidnapped by the assailant. And he, who, once back, thought to enjoy family happiness in the company of his wife and toddlers …

Hiro’s journey is shared by the other two controllable heroes 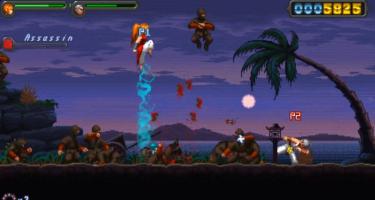 The path of the aforementioned character is shared by the other two controllable heroes (Meilin and Shin). They have, of course, an introductory cinematic of their own, nevertheless – and we will regret it – they do not have specific campaigns. They are content quite simply to replace Hiro: the course and the events are the same, only the heads change. Even their attacks are (almost) similar.

READ :   Our Preview of LEGO Star Wars: The Skywalker Saga

The narration and the dialogues (in English with French subtitles), worthy of the worst B or Z series, are satisfactory… well, everything depends on the audience. If you’ve had a good time with a smile on your face watching Chuck Norris-style ’80s action productions or even a nanardike production, like Cult Good Samurai cop, then the game is for you. The dubbing, moreover, will convince you: the voices are cheap, offbeat, ridiculous at will but, by that, fun. The app does not take itself seriously and even proves it during various sequences sweating with absurd humor.

A journey strewn with pitfalls 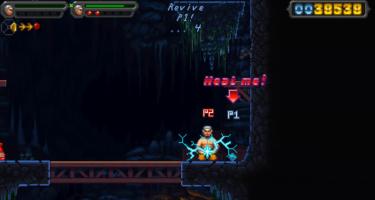 The gameplay of this Okinawa Rush is interesting, for better or worse… By that, it will cause some problems for many of you. Why? Quite simply for its high standards. Nevertheless, we can pull our hair, bite our nails, we can not deny it, this is what gives flavor to the title. Different combinations logically allow the use of various attacks. It is certainly possible to use the most classic, simple kicks or punches, but it must be admitted, this is much less effective and devastating.

Indeed, the higher the degree, the fewer advantages are attributed to you: exit the number of additional lives, for example

Generally, the enemies that come to block your path are quite easy to defeat, only their number is likely to pose a big problem, especially when time is tight (well, this only concerns a high degree of difficulty and the arcade mode ). Ninjas, Tengus and other fanciful, mythical creatures are announced in spades. The assemblies are so provided that the fight becomes a mess: a real orgy. It is so complicated to get rid of all this mass that it becomes frustrating. Imagine the thing if the chosen difficulty level is high. Especially since the higher the degree, the fewer advantages are attributed to you: exit the number of additional lives, for example.

The big problem lies in the keys allocated to the actions of the characters: they are far from intuitive, at least on PS4. We are often wrong, believing that we are doing one thing while another is happening. However, it is possible to change the key configuration according to your preference.

It is through interior and exterior settings (forest, seaside, cave, etc.) that you will rub shoulders, alone or with a friend, with all this little army. However, if we have plagued a little previously against the hallucinating amount of enemies, we can however recognize that with this configuration, we do not get bored. There is always someone or something (a zombie is one thing, eh?) To beat. At the same time, “it’s normal” you say to me, beat’em all oblige. Certainly… but seeing so many opponents on the screen is unusual, isn’t it? Especially since they appear a little out of nowhere: several ninjas will not cease to surprise you by appearing just in front of you, in the air. And while your fists will undoubtedly be your staunch allies, you can also rely, the vast majority of the time, on the presence of many weapons scattered around your path such as a saber, a staff or a nunchaku – the perfect little master’s kit. ‘weapons what. This will give the opportunity to add a little spice to the various clashes and also … of colors: slice them with your blade and it is no longer decent living beings that will stand in front of you, but rather bloody porridge . A state in which you can also end up if you lack attention. Funny!

Some bugs spoil the experience a bit 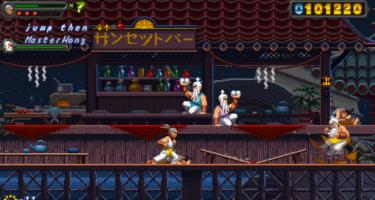 Pleasant? The game can be. However, we cannot omit the various bugs that somewhat spoil the experience, such as the screen that freezes, forcing you to restart the application. It only happened once during the 5 stages of the title, but it happened. Or, we can mention some collision issues: you think you are, for example, safe from a trap, but unfortunately not. And then there are the other flaws, which will make your job a bit easier. In any case, this is what happened to a boss, who saw his life bar decrease when crossing a certain area.

Otherwise, graphically, it’s correct, worthy of a title 16-bit. And as for the musical production, it has the merit of properly punctuating your trip, presenting at times some flashes of light, like the bewitching composition that accompanies the title screen. Nevertheless, one can sometimes note its sudden disappearance. This often happens when you lose a life and start over at the brazier checkpoint.