Initially a spin-off of a role-playing game saga titled Shin Megami Tensei, License personas was able to free itself from it to become a series in its own right, like its model. We have already given you an overview of Persona 5 Strikers, which is a direct sequel to personas 5, but we couldn’t play it. This time we offer you our first impressions of the title after a few hours spent in the first dungeon. 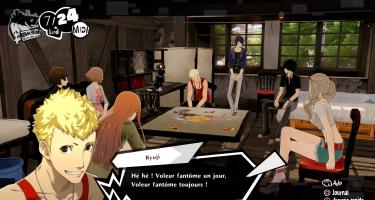 Joker was happy to reunite with his friends from the Phantom Thieves for the holidays. The latter welcome him with great pleasure at the Leblanc café and decide to go camping together. To establish their journey and the necessary preparations, they use the latest fashionable mobile application, EMMA, in which you just have to put a keyword to have access to lots of solutions. But as he goes shopping for the holidays with Ryuji and Morgana, Joker is drawn to a street event: Japanese idol Alice Kaziiraghi opens a store that will sell her clothing line. He gets a card that gives an appointment for a live event on EMMA. When he types the keyword, he finds himself transported to an alternate Shibuya, dressed in his Phantom Thief costume with his two companions. Could it be that Alice has things to hide, in other words, a dark side that it would be better not to reveal in broad daylight?

We won’t say more so as not to spoil the scenario. Be aware, however, that the two new characters, Sophia and Zenkichi, appear quite quickly. The first is an AI with which you can play during the dungeons, and the second is a detective who will stick with you.

Guillaume Musô (we grant you, it was easy) 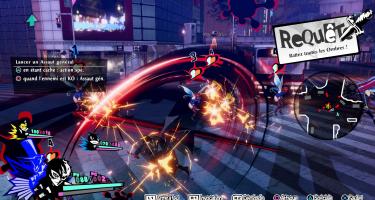 But Atlus had the will to change the shape of the game. Therefore, the title was co-developed by Omega Force and Koei Tecmo, to turn it into Musô. Or rather in a hybrid between action-RPG and this kind of game. First of all, you will have all former members of the Phantom Thieves at your disposal, as well as Sophia. The latter will use yo-yos to fight. Yes, yes, we assure you that at a distance and at high speed, it can hurt. You can put four characters in your group as much as possible. Of course, this first dungeon was filled with Shadows, which represent the spectral forms of the enemies, except this time, each shadow will multiply into a multitude of others. So this implies real-time battles.
This preview took place on PS4 for us, it’s the Square key to give basic blows, Triangle to distribute more powerful blows. Combining the two will result in combos that hit multiple enemies. Rond is used to make general attacks. You obtain XP and money after cleaning the area.

READ :   Tango Gameworks (The Evil Within) does not want to be associated with survival horror

However, discretion must be in order and if it was underexploited in Persona 5, it takes on a more important place here. In effect, surprising a Shadow will give you a non-negligible advantage in combat, with stunned enemies, allowing you to launch an all-out assault directly. But if they surprise you, you will then be at their mercy and they will not hesitate to cause you heavy damage. Of course, this first dungeon held some surprises, like bosses, to slow down your progress. And some, in normal mode, won’t give you a gift. Fortunately, changing the difficulty will not affect story progression in any way. You should not hesitate to use decorative elements. Most can be used observation points and surprise your enemies, or to trace a path to pass discreetly. Similarly, you can also use them to do damage, such as spinning around a lamppost.

You will also be able to switch between allies by pressing a direction of the directional pad, thus giving a new function to the relay. Each character has their strengths and weaknesses, in various areas: attack, magic, and stamina. Some are made for melee while others will focus on distance. If the character you control is KO’d, you automatically play with another of the fighting team. 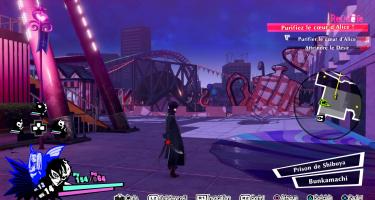 Exploration is globally again in order, with goals to accomplish in order to move forward, marked on the mini-map with an exclamation mark, as well as the distance to them. But nothing prevents you from going into the recesses to find interesting things. the third eye (R2) not only makes it possible to determine the dangerousness of the surrounding enemies, but also to indicate in particular the ideal path to reach certain points of the level. The Waypoints fulfill the same roles as the “shelters” of the previous game: they allow you to save, but also to leave the dungeon if you feel like it. However, this will not advance the day. you can therefore return to it without penalty, which removes the notion of urgency. You will therefore only change the day if the game decides so. To avoid excessive monotony, you will sometimes have to protect Futaba, the hacker, hordes of Shadows that swoop down on her when she hacks a mechanism. It’s pretty well done and the mini-map helps a lot to find your way around. Globally, the action RPG / Musô mix takes quite well. Going wild and unleashing your best shots on hundreds of Shadows has a relaxing side. The (unacknowledged) own Musô…

Technically, the game is clean. We obviously find the paw of Persona 5. The menus have undergone a facelift but are still classy. Our version has not undergone for the moment no noticeable slowdown and even when the screen was invaded by Shadows, it remained very fluid. It’s even very fast, and the camera often struggled to follow, a recurring evil of the genre. Fortunately, it is quite possible to reposition it and there is a very useful lock system so as not to lose sight, for example, of a powerful enemy. The music of personas 5 are taken directly, which will no doubt please the fans, but we hope to hear more as we progress further in the game. You can choose from the outset to opt for the English or Japanese dubbing. We performed in the second language and the actors who were dubbing the original characters reprized their respective roles. However, we confirm that the game will be translated into French at the level of the texts.

It took us about 6 hours to get out of the dungeon, but of course it all depends on how you play.

For more information and our final opinion on the title, we look forward to seeing you soon in the detailed test.