During a beta test phase spread over two days, I had the opportunity to lay my hands on the next game signed Platinium Games: Babylon’s Fall, an action-rpg with a strong game-service trend. We are talking here about a studio to which we owe the excellent Bayonetta, the incredible Nier: Automata, the very good MGS Résurgence or more modest games, but with gameplay that is still just as clean, like Transformers Devastation or Vanquish. And the list is still long. Now that I’ve done an overview of the studio’s pedigree, I have a question: Why Babylon’s Fall? What happened to get here?

It’s not just Babylon that’s falling, everything else is falling too 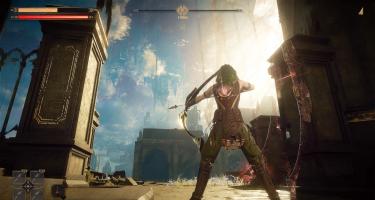 I’m not going to have fun telling you the scenario of the game or anything else as I didn’t understand what was going on. The beta was sorely lacking in information and staging to lay the foundations of its universe which, as a bonus, does not turn out to be particularly welcoming. I’m not going to cut corners, it’s ugly and very poor. The studio has apparently tried to do an ersatz watercolor effect on the backgrounds and a faux drawn style on the characters. The thing is that the mayonnaise doesn’t take since, technically, the game is picky (yucky textures, western modeling…).

To drive the point home, the art direction is quite common and the character design bland. Moreover, even the enemies, all cloned, have nothing remarkable and seem straight out of an unoriginal MMORPG. We stuff ourselves all the same with kinds of greyish goblins all the way to a boss, or knights without charisma and dressed like us. We have a hard time swallowing the pill from the outset, especially when we think of apps like Bayonetta that really look good. 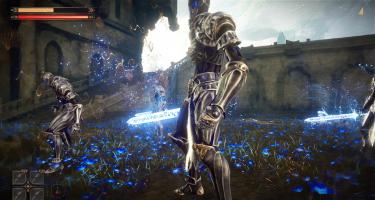 As if the visual purge wasn’t enough, Babylon’s Fall gets bogged down in the worst of game-service. We spend our lives in a badly-made HUB where NPCs swarm with nothing interesting to say to us, in addition to standing straight as poles. Even merchants don’t have the strength to even move their arms to pretend to be alive. This oh so exciting table also serves as a place for exchanges and sharing between players. No, I’m kidding, in reality you’ll just bump into someone here and there, but that’s no use at all, except to justify the mandatory online connection that we must systematically validate with our Square Enix account each time you launch the game. For a bit, you might think that Babylon’s Fall is a multiplayer game. How is that? 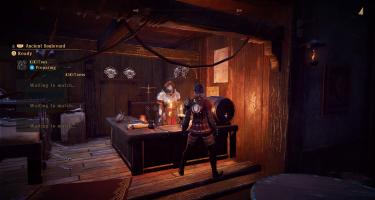 The structure of the title rests only on a thread, at least in this beta, and simply asks us to climb the famous tower of Babel where a thousand dangers lurk. We therefore link missions directly distributed by a table of quests without an ounce of staging and / or interesting dialogues, it goes without saying, and we are already launching a strawberry matchmaking. Personally, I was able to play twice in cooperation with 3 other players, but the rest of the time I did it solo like a grown-up. Either I simply couldn’t find anyone, or connection problems forced me to restart the game. Well, I remind you that this is only a beta and that the problem should be solved by the release. Anyway, it allowed me to see how unbalanced and uninteresting the software was on its own.

It’s quite simple, in solo, the monsters are real HP bags which make the fights extremely long and tiring, especially as the system used is nothing fancy. We’re actually holding something here that really hurt my heart, how could Platinium Games have missed its fights so much? When we think of Astral Chain, MGS Resurgence, Bayonetta… However, on paper, however, it sends dreams: we have the possibility of equipping ourselves with four weapons that float in our back and are all usable to fight, in addition to offering different movements depending on the location you give them (fast, heavy or even special blows). Even the arsenal is nice and allows many synergies: sword, shield, wand, bow, hammer… 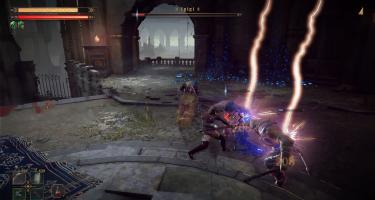 However, at no time does Babylon’s Fall come as a surprise. The choreographies are soft as possible, only the sword and the dodging offer beautiful effects, that is to say! For the rest it’s a distressing banal, even worse, it’s flat and soft. No aerobatics, no stylish executions or sharp counter-attacks, no, nothing. We beat our keys to line up combos of five or six shots and that’s it. So again, it’s just a beta and I’ve only played 6 hours, maybe the game will eventually feature more variety of moves or some gear for splurging, but in the state, for a first preview, it throws a hell of a chill. 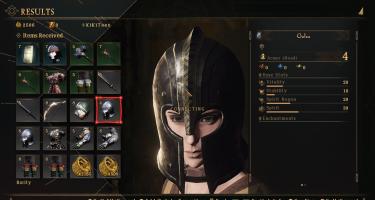 As a bonus, the levels are all alike both visually and in their construction, and we thus link narrow corridors in a straight line and fights that only take place in closed arenas from which it is impossible to leave as long as the threat does not is not eliminated. Some bosses are also in the game and will only make an impression in their ability to spam 3 patterns, at least one of which prevents you from playing. Like this kind of goblin leader armed with a mace who spends his time going into fury mode and hitting everything around him, in addition to taking countless damage without flinching. The craziest thing about it is that despite the poverty of the proposal, the fights even manage to become, sometimes, unreadable. While our weapons floating in our backs already tend to spoil the view, some effects are much too pronounced visually and bring nothing, while once again breaking our field of vision. So tell yourself that when you fight with 2, 3 or 4, we no longer get anything.

Fortunately, we can increase its damage, and therefore the dynamism of the fights, by looting a whole lot of equipment. On this point, it is difficult to reproach Babylon’s Fall for anything. The loot is generous, the ugly but numerous pieces of equipment and you can even find a whole bunch of statistics. On the other hand, if you intend to dive into it and understand each feature, you will have to do with an interface that is not at all ergonomic and that hides its information in a myriad of tabs, making everything difficult to read.