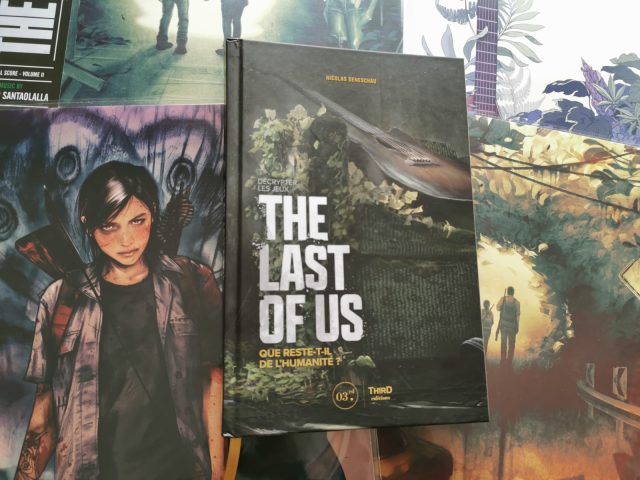 After the many derivative products around The Last of Us and The Last of Us 2, the publisher Third Editions offers us a nice pavement that looks back on the two masterpieces of Naughty Dog. A must-have?

In 2013, spurred on by Neil druckmann and Bruce straley, Naughty Dog ends its reputation with a brand new license, The Last of Us. A duo who, a few years earlier, were already responsible for the rise of the studio through Uncharted 2: Among Thieves, a title that would redefine the approach to AAA coming to PlayStation. And while we thought an impossible sequel to the adventures of Ellie and Joel, for fear that it would destroy the previous work and in particular its memorable ending, the developers of the coastal city of Santa Monica wanted to demonstrate that it was not only possible, and particularly relevant, to continue this journey that has shaken players and the industry. Seven years later, in 2020, The Last of Us Part II offers one of the last cartridges to the PS4, and like its predecessor, brand with a hot iron. 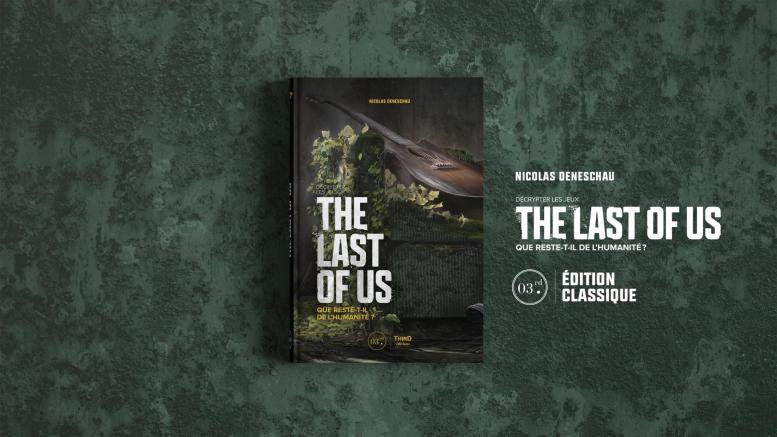 The digestion having taken place, Nicolas deneschau, author, among others, of the book Uncharted: Journal d’un explorer (alongside Bruno Provezza), took out his pen to deliver his analysis of these two resolutely complex softs and behind the scenes of complicated developments in a new 304-page book, “Deciphering the games The Last of Us: What remains of humanity?At Third Editions.

We clear two major “chapters”, one for each game (the Left Behind DLC included), in which Nicolas Deneschau does not refuse anything, and especially not to pass on his knowledge on the subject to us by putting on paper dialogues from the games, extracts from interviews, by describing scenes to dissect them with a perfect balance, using references and even external opinions, like that of a researcher, or by exposing us for example the different iterations of TLOU1 and TLOU2. The comprehensiveness of the book is its success, especially since it really goes further than the two opuses. We have the right to a (very interesting) dive into the past, during the time of Andy Gavin and Jason Rubin, the co-founders of Naughty Dog, a glimpse into the rise of Neil Druckmann (now co-president), turbulence experienced by the teams… Many other elements, such as reception of games internally and by the public, the abandonment of the film for the TV series etc. are also mentioned. In short, you shouldn’t close Decrypting Games The Last of Us: What’s Left of Mankind with that feeling of not having learned anything. 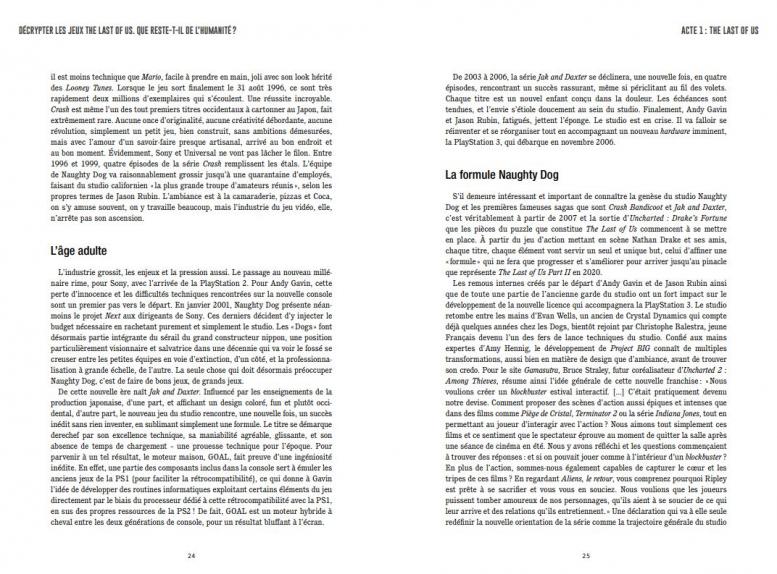 And even if certain information would not be secret from you, especially if you had watched the documentary Grounded: The Making of The Last of Us, Nicolas Deneschau’s sharing is so communicative that he manages to make us relive these two epics without us taking the controller again. I am thinking, for example, of this mirror effect within a game or even between the two, that we can perceive with certain objects, actions or words that will never cease to give us chills. A mirror effect which also shows that The Last of Us Part II is obviously not a mechanical sequel, which would have been encouraged by the simple prism of money, but an essential part of a majestic painting.

READ :   Black Adam explodes everything with a first trailer and many heroes

“Deciphering the games The Last of Us: What remains of humanity?” is a very well-written, rich and balanced book, which should be of interest to all fans who wish to learn more or immerse themselves in the analysis of two major works of the video game. An impeccably finished book, in line with other Third Editions books, with a particularly well-felt cover featuring Ellie’s guitar, an oh-so-symbolic object… To devour!