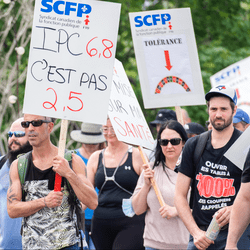 At the moment, some of the dealers at the Montreal Casino are on strike. It has been more than 11 weeks that the situation is still going on. Moreover, the union deplores the impasse in the negotiations. L

he state-owned company Loto-Québec, which manages the gaming establishment, does not really share this vision.

In a recent press release, it believes that dealers already enjoy some of the best working conditions in the industry and says it is still willing to negotiate.

Dealers without a collective bargaining agreement as of March 31, 2020

On Saturday, May 21, 2022, starting at 9:00 am, more than 500 dealers at the Montreal Casino formed a picket line, following 2 work stoppages of 4 hours each that occurred over the previous weekend. These angry employees believe that the conditions proposed by Loto-Québec for a new collective agreement are insufficient. As a reminder, the dealers have been without an agreement since March 31, 2020.

The main demand concerns the duration of paid breaks. According to the union, almost half of the dealers suffer from health problems such as tendonitis. The reason for this is that they stand for a long time and have to deal out 10,000 cards a day, while working 5 to 6 days a week.

In its recent press release, the state-owned company is surprised by these demands, since Montreal Casino dealers enjoy some of the best working conditions in the industry. In fact, employees at other Loto-Québec gaming complexes are not complaining. For example, the dealers at the Casino du Lac-Leamy and the Casino de Charlevoix accepted the new collective agreement proposed by the public company a few months ago.

Moreover, Loto-Québec does not understand why the union deplores the impasse in negotiations. Indeed, the company says it is still ready to negotiate, while the dealers have already left the discussion table on several occasions. But here’s the thing: one of the main demands of the angry employees is to get 30 minutes of paid break for every hour worked.

This would mean that more than 30% of working time would be a paid break. However, Loto-Québec says it cannot accept such conditions from the point of view of responsible management of public funds. Moreover, they are quite unusual in the industry.

According to the union, the strike of the dealers at the Montreal Casino has already cost the state-owned company nearly 13 million Canadian dollars. In fact, each week that has passed is costing the company the equivalent of one year of additional costs imposed by the employees’ demands.

No matter what happens, the gambling establishment is still in operation. The restaurant, the shows and the slot machines are operating normally. Only the traditional tables are affected by the strike, but the most popular games such as blackjack and roulette are operational as usual.