What is Praey for the Gods? What is this hidden child-like game from Shadow of the Colossus and Zelda BOTW that seems to have come out of nowhere? Well, this is an indie title developed by a small team of three, No Matter Studio, for almost seven years after a successful Kickstarter. A software that has been reviewed and refined many times over and has seen its ambitions heightened over the course of development, perhaps even a little too much.

Alone in the world 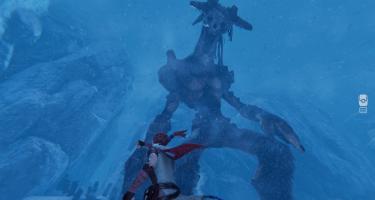 Our journey begins in the shoes of a young redhead stranded on a frozen shore. The damsel is on a quest to find a new home for a civilization in the throes of disaster and extinction. His only salvation is here, in a land covered in snow and scarred by icy storms, which also turns out to be the land of doom deities and undead entities. So this is your objective, to find and destroy the titans who roam these scarred lands and thus rekindle the hope of a second chance for your people. And if this brief summary is too cryptic for you, know that it took me several hours of playing to understand the ins and outs in-game.

Playing the mystery card all the time, the game is practically silent, devoid of staging, other than the introductory cutscenes of your gigantic opponents, and only the few lines that accompany the opening of the game will give you event information. For the rest, it will be necessary to be attentive and to explore a vast open world in search of environmental narration and pieces of parchment recounting the misadventures of the few men who trod the icy grounds of the region. 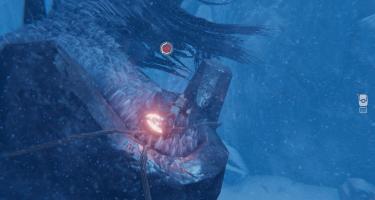 It doesn’t matter whether you are charmed or not by the slightly dated visual of the software (slobbery textures, slightly stiff animations, omnipresent aliasing and clipping …) the immersion is still immediate whatever one says about it.. From the start, we are carried away by the coldness of the atmosphere and an artistic direction that plays on the gigantism of the environments to reinforce the loneliness and the fragility of our heroine. As dreamlike as it is oppressive, the whole is rocked by an epic orchestral OST which takes to the guts during the 8 hours it took me to get through the software. I saw the end of it and yet it was not won.

A successful artistic direction and atmosphere 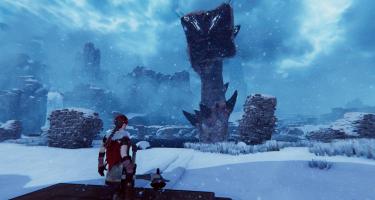 Because even While Praey for the Gods has an engaging and well-crafted vibe, sometimes it isn’t enough to offset some frustrating issues. We will start with the movements of our heroine which are a real paradox. The latter is able to use a grapple to cling to a whole bunch of elements, gain heights or even cling to very specific anchor points, which I did not understand the usefulness moreover since we can place our grapple on 90% of the decor anyway. The heroine can also swim, jump, roll to dodge and use a sail to glide long distances, or even climb virtually any surface like a Zelda BOTW. In short, the beauty is nimble on paper, but in reality, even if the animations are well done, she is terribly soft. 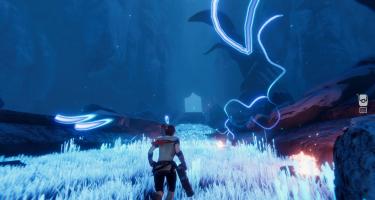 We spend our time walking in slow motion in 60 cm of snow, the jumps leave us several seconds in the air like in a Halo, the climbing is super slow and the rolls seem to be parasitized by input lag. In addition, each movement that we perform will burn our endurance gauge to the point of penalizing us, or even immobilizing us, when it is empty. However, we can increase it by recovering totems scattered here and there in the map. The problem is that the world is vast, totem poles are tiny and that most of them are stashed away like secret collectibles to be discovered when they are rather important. Results, it’s a constant struggle, and when in addition to the mechanics of survival asking us to manage hunger, sleep and cold in an immense open world map with vertiginous reliefs, we lose the central thread a bit which is basic liquidating huge deities in fights a la Shadow of the Colossus. As the other would say, it’s a bit too much.

Especially that finally, the survival aspect has no interest, just like the craft and the wear and tear of our weapons (sword, bow, grappling hook…) if not to slow us down in our quest, or even to frustrate us at times. The angle chosen here is a bit awkward, although we can feel behind the desire to offer a unique experience mixing genres. In addition to artificially curbing our progress, it also sometimes becomes a real thorn in the side during the fights, sometimes even before they have started.

Shadow of the Colossus 1.5 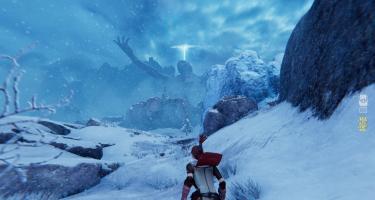 Despite everything he offers, the main idea of ​​the software is still to kill powerful and imposing monsters. To do this, we will first follow a gigantic beacon directly anchored in the skies to the area of ​​the confrontation where our targets will wander. The sequel, the aficionados of Shadow of the Colossus know it, it will be necessary to find a way to climb on the beast and bring it down. The thing is, in Praey for the Gods, we don’t have the finesse that SOTC had. If there are many ways to climb on the titans that we will face, sometimes even several for the same creature, it will however be necessary to systematically do the same thing to send it to the mat: destroy 3 or 4 mechanisms embedded in its body. . 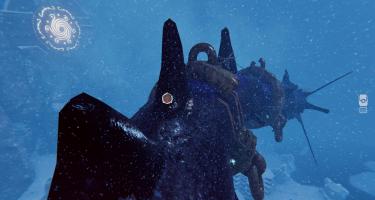 We therefore trudge on titanic beasts, sometimes several hundred meters long, on land and in the air. They are only a handful, but these deities are particularly striking. for the most part, in particular thanks to a particularly successful design, although some look a bit too similar to their counterparts from Shadow of the Colossus. Fortunately, these monsters are visually impressive since their behavior is not violent. They move terribly slowly and ultimately have little aggression towards you.. Most of the time we will pass the weapon to the left by mismanaging our endurance when climbing the body of the beast or by missing a jump because of the sluggish movements of our heroine. The titans do not defend themselves too little when we are on the ground and will often be content to shake their mop sporadically when we are on top trying to reach the mechanisms to be destroyed. In short, apart from the simply delicious music that accompanies each confrontation and the disproportionate size of our opponents, bringing down these divine beings is not very exhilarating, it is sometimes even rather frustrating given the worries that drag the game (heavy movements, sometimes punitive endurance system…).

READ :   Palworld: the adult and ultra-violent Pokémon shows itself on video