Riot’s versus fighting game continues its development and brings us two great news: the confirmation of a new champion and some info about its business model.

Years ago, Riot Games announced several game projects, including Valorant, League of Legends Wild Rift, and a slew of solo and multiplayer spin-off games. Among them is Project L, a competitive fighting game directly inspired by League of Legends.

Project L, still in development, comes back today to tell us a little about its progress and more precisely about the new champion to join the fight: Illaoi.

Illaoi, the terror of the top lane in League of Legends, will have her place in Project L. Armed with her totem urn and aided by the deity within, Nagakabouros, Illaoi plans to smash other already official champions like Darius, Ekko, Jinx or again Ahri.

If for the moment the development of the character is still in its infancy, Riot Games already has an idea of what it intends to do with the high priestess and details it in the following way:

Illaoi fights alongside his god. Nagakabouros is an imminent and constant threat by which Illaoi feels supported and which his adversaries fear.

Slow, but always in motion. Illaoi is always moving and she punishes those who are still. This is one of the main beliefs of her god, and we wanted to represent her through her gameplay.

An overwhelming pressure. Once Illaoi puts the opponent in a position where he is hit or must block, she is relentless, forcing her opponent to make a move on her terms.

Illaoi is the engine, Nagakabouros supports it. Illaoi’s physical strength is her main source of energy and the tentacles of her god are there to help her, not to replace her. Nagakabouros is not the star of the show.

Not a puppeteer. Illaoi should not feel like she is ordering her god around. She can control the tentacles from her totem, but all independently spawned tentacles should feel like gifts, not privileges. Illaoi cannot spam them without earning them first.

Not a zapper. Illaoi doesn’t want to drive the opponent away with tentacle blows, instead she wants to create openings for her to jump and inflict damage herself.

Illaoi would therefore be a monster primarily designed to fight in close combat by blocking his opponent. For the moment, we only have this to look at, but gameplay should be shown later this year. 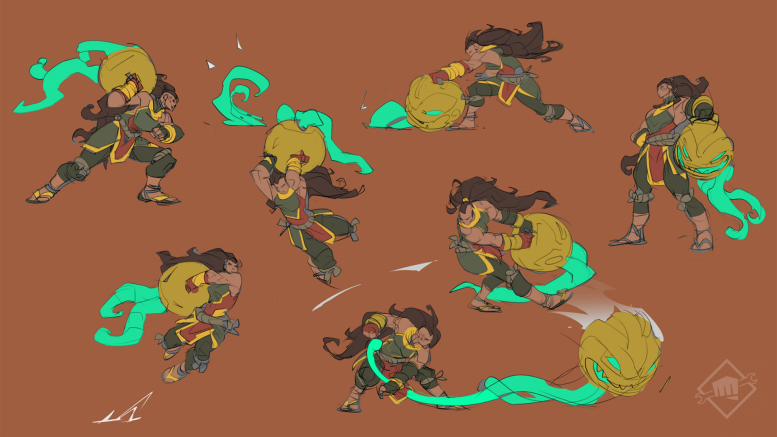 The second piece of good news from this developer meeting was the official announcement of the business model chosen for Project L. Like most of Riot Games’ main titles (League of Legends, Legends of Runeterra, Valorant, TFT…) Project L will be a totally free-to-play game and will enjoy the same support as other competitive games from Riot Games.

READ :   Sony now has a page dedicated to PC games

With Project L, Riot will therefore cover virtually every style of play on the competitive scene. All that’s missing is a racing game and we’re good.