Sony is reportedly laying the groundwork for its upcoming PlayStation Plus and preventing players from stacking old PS Plus and PS Now subscriptions until further notice.

Several users have noted a problem with the accumulation of PS Plus or PS Now subscriptions and can no longer use prepaid cards to try to save money.

Sony is preparing its new PlayStation Plus program or is everything bugging?

PlayStation 5 or PlayStation 4, same fight, it is now impossible to stack PS Plus or PS Now subscriptions with a view to scratching precious funds. Sony would have indeed blocked the possibility of renewing its subscriptions several times to limit losses.

Several users on the web, especially on ResetEra, therefore find themselves stuck with prepaid cards that they can no longer use. The latter expected to save money by taking advantage of Sony’s subscription migration policy which was favorable to them.

Sony, I need help. I tried to redeem a code to update my PS Plus subscription, but when entered, the code says it’s already used. There is nothing in my transaction history, how do I get a new code?

My proof by the way
Fix your services if your gona shut down ps plus then you should have done it closer to june and or not let major stores like amazon sell your gift cards I just wasted 60 dollars taht I cant use Im furious pic.twitter.com/IEnkZYyz25

The Japanese giant had indeed affirmed that all holders of a PS Plus or PS Now subscription would see their subscription automatically migrated to the new program for the same duration when changing offers and at no additional cost. Many players have therefore quickly done the math and started to provide themselves with prepaid cards at a lower cost to make nice savings, except that this is no longer possible for the moment.

READ :   God of War Ragnarok: a hit even before its release, the hype is real

A problem with the PS Plus that is only temporary?

Some users have tried to contact Sony support, which tells them that the option is currently unavailable, but that it would only be temporary, as reported by a Push Share reader.

Thank you for contacting PlayStation Support regarding your voucher redemption issue.

I have checked the voucher and your account and can conclude that as of now there is a temporarily disabled feature for PlayStation Plus/Now subscriptions that does not allow stacking of either on already active subscriptions. 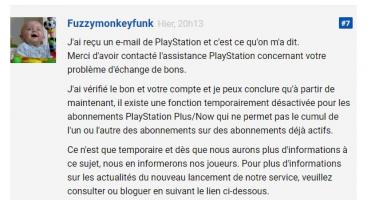 And this is not an isolated case since the testimonies are multiplying on the web. Sony could therefore indeed block the possibility of combining subscriptions to limit damage when changing PS Plus, June 22, 2022 with us, and migrate them internally. As a reminder, the firm had already withdrawn the one-year PS Now subscription from its current offer to, again, prevent players from stocking up.

In any case, if we hear a lot of players complaining on the web, Sony for its part remains perfectly silent on the subject for the moment.