The game has been tested on a version early access after its publication on 05/16/2022. The developers believe that this early release is playable and can be offered to the public. The contents do not however reflect the final version of the product, our rating should therefore be considered as a preview note.

In the vein of small traffic simulation games like Freeways or the excellent Mini Metrothe independent studio Bitrich launched Rail Route in early access last year, and has just deployed its fifth major update for this beta version with very positive feedback on Steam so far. 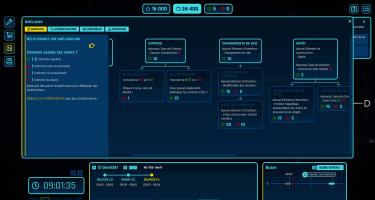 A simple concept, fun, relaxing at times, dedicated as much to those who want games that I call “aperitif” (easy to learn and difficult to master, as we have read on many thinking apps since the release of Tetris) than tryharder type games. Rail Route brings together everything that generally works in small independent nuggets of puzzle games that don’t look like much. The basic principle is also very simple, since you have to manage the rail traffic of a very minimalist map. Here, no open world, no graphics in quatka-sanvin-héfpéhesse, just one black map with dots, lines and some colors. Guided by the soft and didactic voice of Jozic, the tutorial gives you the basics quite quickly. You are station master. In front of you, the tracks represent the lines of your rail network, which join the platforms of different stations in your infrastructure. Each comes from abroad, symbolized by dotted lines that blur, and leaves at some point outside your network. Between the two, rail transport therefore passes through your expert hands. It’s up to you to accompany freight trains or omnibuses on the network, taking care of their stopping and timing requests. 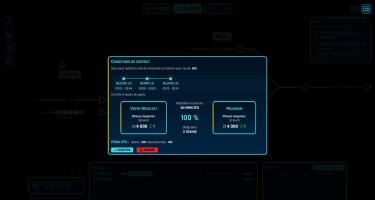 To manage your line, it’s just as simple since you go having to open or close traffic lights represented by small buttons that activate red or green lines, symbolizing occupied or unusable sections. One click to turn on, another to turn off, and you thus give the order to the drivers to cross the points of no return in complete safety. Before that, as you are a switchman, the priority task is to check that the forks are in the right direction, thus creating the ideal route for the vehicle. As station master, you have a duty to secure the track, while respecting the timetables that are displayed in a corner of your HUD, all represented by a daily schedule that scrolls tirelessly in real time (you can, fortunately, increase the passage of time up to 24 times). A function which should not be abused as this profession requires precision, sometimes to the nearest second, to circulate two trains in the opposite direction to each other, on the same section. 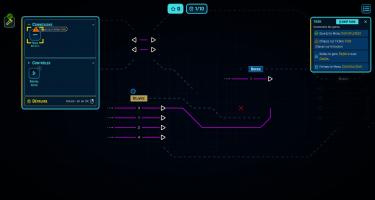 It’s the whole challenge of the game that comes here: meet deadlines without crashing vehicles, as we have already seen in ATC (airport control tower) management games such as Tower!3D. Fortunately, the maps have a construction menu that gives you the option of creating new lines, opening new platforms, or installing sensors and other lane signals, which allows you to automate a little management. The shop is not unlimited, but everything is bought with the credits you get by completing certain challenges. You can also spend your money by buying new stations (and thus increase your traffic and your points) or above all go through a very complete improvement menu. This is where you can, for example, increase the speed of certain trains, automate routes, unlock new building blocks (such as tunnels) or improve your interface (with color codes on stations, for example). The tunnels are also very practical since the maps have this difficulty of not being completely editable. Indeed, the tracks can only be built away from blocks representing the “walls” of the game (symbolizing the vagaries of a terrain, such as water, houses, mountains, etc.), randomly dispatched on your screen . A headache when you want to double your lines to hope for more traffic, but your platforms are for example in a bottleneck and cannot accommodate more than two lines.

This job requires precision, sometimes to the nearest second, to run two trains in the opposite direction to each other, on the same section

Improvements are bought on their side thanks to train points. Each time a route has been completed, you get new red or green train points, which function as bonuses to spend. The greens are the regular contracts, ie the usual lines that pass all day, and the reds are the occasional contracts, challenges that you can accept (like in all good management games since Theme Park) for you make a little extra dough, while racking your brains. Here again, you will have to be a good manager since an accepted contract can very quickly disrupt your daily routine (my god, how funny I am) and delay other lines. Indeed, for most routes, the driver asks to arrive at a given station platform, follow a certain schedule and arrive at a well-defined terminus (a particular platform in a particular station as well). A grain of sand in the cog and the whole machine seizes up…

READ :   A remake of Until Dawn on PS5 and Xbox Series X? News @VGR

A pile of increasingly complicated cards 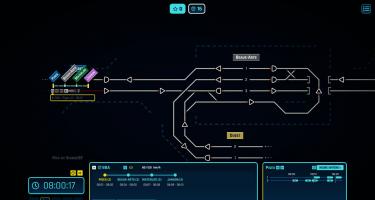 Hyper complete, the game already offers many cards, especially since the community is active on Steam Workshop to offer others. We find the “rush hour” maps, where you have to manage increasingly strong waves, then the “schedule” maps, the “story” mode which takes you to a city with predefined schedules of your network that you must respect to be as punctual as possible, and finally the endless maps whose goal is simply to make it as long as possible to unlock all the improvements and obtain the best rail network the country has ever seen. Here we find fairly complete maps of Glasgow, Berlin, Osaka, or extreme networks like Washington DC or Wroclaw, with stations with 7 lines or 24 different lines and trains every 10 minutes. It remains easy compared to the invented time map of “South Honk”, 49 minutes of madness where you have to meet the deadlines of 45 trains on lines nested one inside the other with, sometimes, 10 tracks on a station. If the endless cards are quite permissive and can last you a few hours, the hourly cards are on the other hand very punitive (and much faster) since a slight delay makes you lose points and can cause a series of problems at the point of you miss the whole end game. 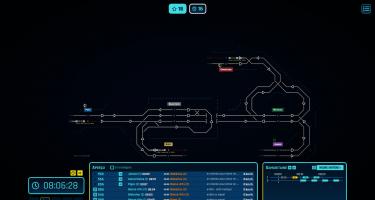 To add a little more spice and fun, the game also offers a level editor to build your own playground and challenges. The craziest of you, as well as serious sim enthusiasts, or simply chauvinists, will therefore be able to reproduce existing environments fairly faithfully. Then the joys of traffic from Cholet station, flagship of the La Possonnière line to Niort (no). We regret for the moment a sound atmosphere that is far too minimalist. If we greatly appreciate the chamber music that continuously accompanies the parties, reminiscent of the Sims tracklist for example, there are no sound effects directly inspired by the rolling stock of the SNCF or the Deutsche Bahn. The latest updates have fortunately added a few small parts of lore at the tutorial level, in particular a Prologue which allows you to discover the history and the troubled past of the switchman Jozic who recalls his best memories of the rail. The very format of the game, very quick to learn and minimalist, does not necessarily allow us to dwell on its graphics, but we can still praise the fact that it is already very complete and often updated, with good hopes on the follow-up and on the creative strength of the community. To be continued then…