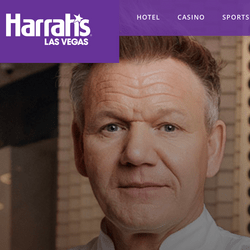 Gordon Ramsay has established himself as one of the most famous chefs in the world.

On Friday, November 25, his upscale restaurant Ramsay’s Kitchen will open at Harrah’s Las Vegas hotel-casino on the famous Strip.

Open daily from 11 a.m. to 11 p.m., it is already accepting reservations via the Open Table online service.

Gordon Ramsay is a regular in Las Vegas. Even before the opening of his next address, there are already five restaurants in the city bearing his name. All of them are located in hotel-casinos operated by the Caesars Entertainment group.

The upcoming Ramsay’s Kitchen aims to offer refined, casual cuisine with new variations on the famous chef’s specialties. On the menu are soups, salads, sandwiches and more elaborate dishes.

A chef becomes famous on TV

Born on November 8, 1966 in Johnstone, Scotland, Gordon Ramsay has become a famous chef thanks to various successful television shows such as Hell’s Kitchen and Ramsay’s Kitchen Nightmares.

During 2019, he partnered with private equity group Lion Capital to open no less than 100 restaurants worldwide by 2024. Nevertheless, the international Covid-19 coronavirus pandemic has significantly delayed this ambitious project, without putting an end to it.

This is confirmed in particular by the opening of Ramsay’s Kitchen within Harrah’s Las Vegas on November 25, 2022.

Gordon Ramsay’s relationship with Caesars Entertainment Group is even older, as it was back in 2012 that they got together. This partnership has already resulted in the opening of Gordon Ramsay Steak at Paris Las Vegas and Gordon Ramsay Burger at Planet Hollywood in the same year.

Then came Hell’s Kitchen and Gordon Ramsay Pub & Grill at Caesars Palace, but also Gordon Ramsay Fish & Chips at The LINQ. Outside of Las Vegas, there are also restaurants at Caesars Atlantic City, Horseshoe Casino Baltimore and Harveys Lake Tahoe.

Opened during 1973 as the Holiday Casino, Harrah’s Las Vegas was renamed in 1992. In addition to a gaming area that covers more than 8,400 square meters, it houses 2,542 rooms or suites.

Among its restaurants, 2 others are inspired by celebrities: Pizza Cake by Cake Boss baker Buddy Valastro and Bobby’s Burgers by chef Bobby Flay.